The problem with "The Blacklist"

Can the show reliably find criminals as exciting as James Spader's Raymond Reddington? 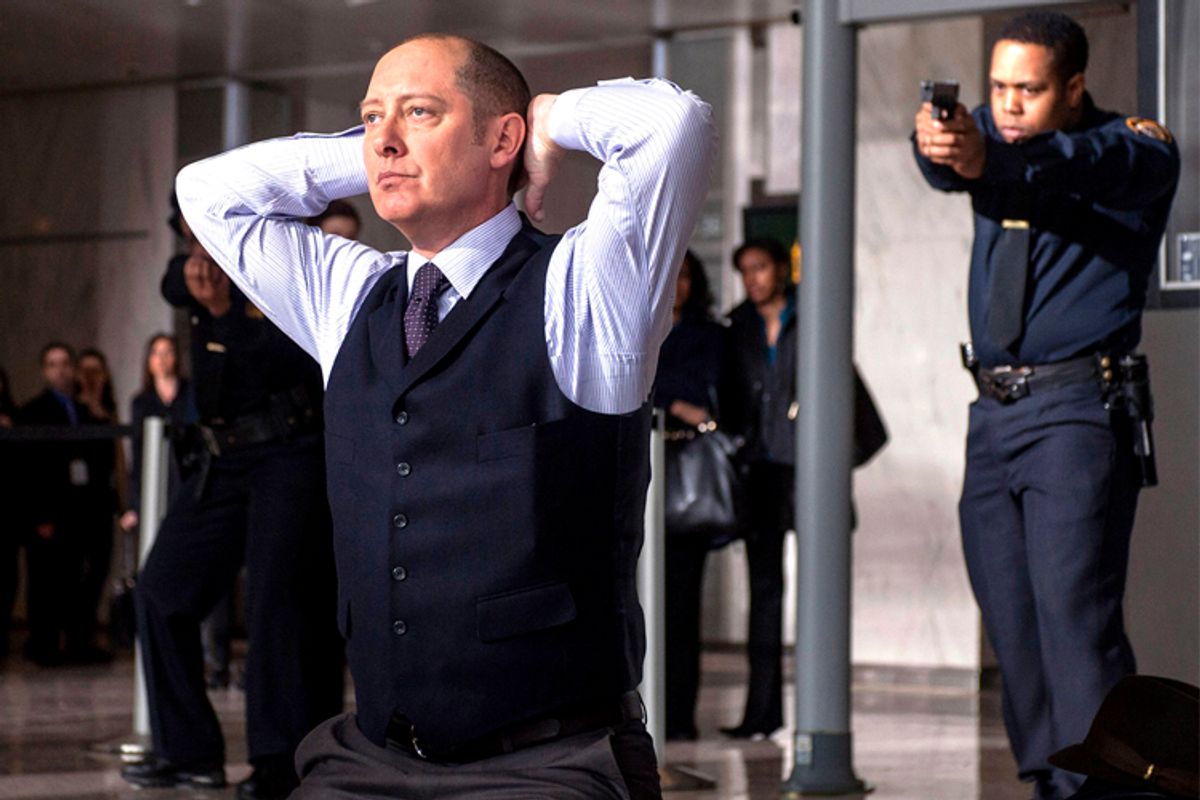 On the most recent episode of "The Blacklist," guest star Tom Noonan played a dentist with a dark side. Stanley Cornish is a gloomy sort of Dexter-Lurch hybrid who gets paid by third parties to dissolve kidnapped victims in a churning chemical bath. For this apparently rare skill, he earned the nicknamed "the Stewmaker." Oh, also, he likes to practice his trade while completely naked, lumbering around rooms covered in plastic like a wrinkled, pink brontosaurus baby. If you're thinking this character sounds like a tossed-off creep from a cut-rate comic book, then you understand one of the major challenges facing "The Blacklist": producing a steady stream of worthy bad guys.

The premise of the series is simple: Notorious international criminal Raymond Reddington helps the FBI -- and specifically agent Elizabeth Keane -- track down other baddies in his stratus. It's as episodic as it gets: every week, new asshole to catch. The episode I just described was called "The Stewmaker, No. 161." (The numbers correspond to the perps' respective positions on the actual Blacklist.)

Thanks to some good art direction and decent, strategically placed CGI effects, the show gives a pretty good impression that the action is taking place on a world stage. Fine dining in Montreal. Jets to Haiti. Daylight drive-by assassinations on the streets of Shanghai. The show has even added a couple of internationals to diversify Reddington's entourage, including "ER" favorite, Parminda Nagra. It's like a Benetton ad of surly crime fighters.

Where the problem lies, though, is in finding criminals as colorful as Reddington himself. As the man with the crisp collars and the list of global felons tucked away in his head, James Spader alternates between sinister and seemingly bored to tears with an ease and grace that is fascinating to watch. He's at his wittiest and most gleefully condescending dressing down FBI agents and dim criminals alike. When administering to Keane, the agent he's dragged under his wing, his fatherly energy is so intense as to reduce her to something like a pouty teenager.

One week, Reddington squared off with Isabella Rossellini, playing an anti-human trafficking advocate who was -- surprise -- actually a human trafficker. (It felt as icky as it sounds.) The episode was titled "The Freelancer." The actual Freelancer was pretty much a nameless, faceless and therefore bland opponent -- more of a red herring than anything else. Rossellini constituted the necessary evil. Spooks like the Freelancer and spy-killer Wujing (No. 84) are afterthoughts in the shadow of Reddington's own jolly menace. Forget about the Stewmaker. If the show continues down a road filled with such caricatures, it'll be no more than a cartoon in no time.

There are also signs that Elizabeth's husband -- wounded in the pilot -- may emerge from his wheelchair and his sheep's clothing as a viable antagonist -- for Elizabeth at least. As soft-spoken and timid as he is, seeing him flip the switch and pull that pistol out of the baseboards could be thrilling.

In the meantime, Reddington himself is the best bad guy "The Blacklist" has to offer, even while he purports to wear the white hat. While in Haiti doing something unspecified and illegal, he takes a call from Elizabeth. When his surrogate daughter asks what he's up to, he responds, "Keeping up appearances. I'm a criminal." It's something of which he loves to remind her. And keeping one foot in the mud is nothing compared to his gunning down a relative innocent in cold blood to save Elizabeth's life. As patient and logical as Reddington is, his occasional erratic outbursts and actions make him all the more threatening. He even drowned the Stewmaker in his own soup after the mad dentist had already been apprehended. But that was probably for the best. Some Blacklisters should never get a chance to come back.