Subtweets may seem like they empower the subtweeter; actually, the subtweet-ee wins. And online discourse loses 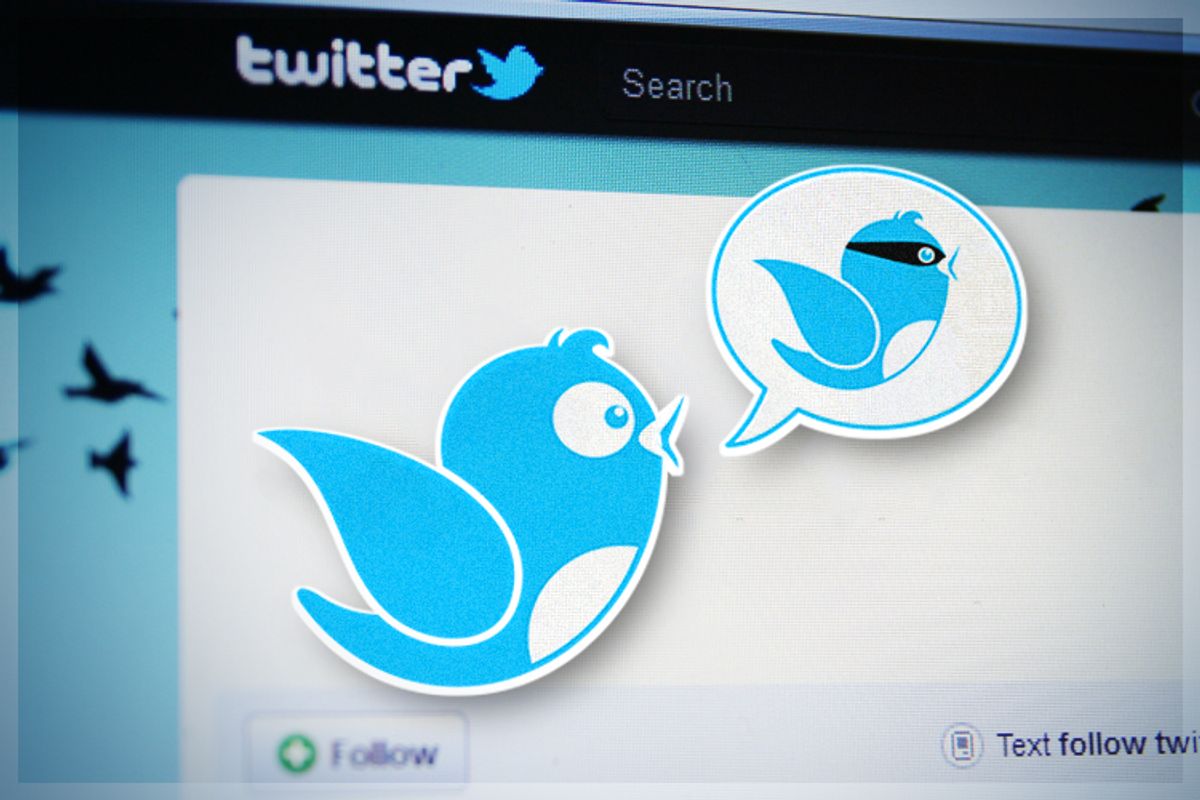 Most rational people understand that short messages, haphazardly inputted into a smartphone during a brisk walk or after a few tabs of Adderall, can be wildly misinterpreted.  Yet Twitter, often described as a 24/7 cocktail party, is such an instantaneous and spontaneous way of communicating that it is often difficult to remember that your remarks about other people, which feel very private, are quite public. If you talk shit about someone, it is remarkably easy for the target of your vitriol to find the tweet and declare virtual pistols at dawn.

But in its best moments, Twitter is a marvelous digital wilderness where wits sharpen quips into 140-character firecrackers joyfully tossed into the vast information forest.

Twitter functions much like gossip, but its public timeline surrenders the privacy of confiding to someone for the instant gratification of connection with strangers. And because Twitter's wall between public and private has eroded with its interface overhauls – a “discovery engine” introduced in 2009,  an “@Connect” tab added in December 2011, and a recently introduced blue line tracing discussion that has caused much umbrage –  it has become increasingly difficult for people to understand how their public tweets to others are being displayed.

Enter the subliminal tweet, commonly referred to as a subtweet.  Such a tweet refers to someone objectionable without actually mentioning that person's handle. One of the most notable subtweets occurred back in February, when Los Angeles Laker Kobe Bryant tweeted “Amnesty THAT” to what seemed like nobody in particular.  But Bryant was responding to Dallas Mavericks owner Mark Cuban, who had suggested in a raucous interview that invoking the amnesty clause in Bryant's collective bargaining agreement might save the Lakers a few bucks. Bryant scored 38 points in a 103-99 victory against the Mavericks, and felt confident enough to express his glee without naming Cuban.  Cuban replied, “Nice to know there is a least one team and their players, outside of the Mavs, that listen to everything I say.”

But subtweets extend beyond mere trash talking.  Last month, a Twitter account emerged from a Hudson, Ohio, high school in which teens tormented each other with rumors about unnamed people, a disturbing form of cyberbullying.

The subtweet is Twitter's answer to passive-aggression, which remains the great cancer of American discourse. Once you peel away the derisive snub, the subtweet ultimately reveals that the person not being explicitly referenced really matters.  But isn't there more power in completely ignoring a toxic person?  Or trying to reach that person through sustained civil engagement?   Instead of empowering the subtweeter, the subtweet gives power to the unnamed.  With one ironic elision, the subtweeter communicates to her followers that she could care less about the person. But of course, as the comedian David Mitchell pointed out, “'I could care less' is absolutely useless as an indicator of care.  Because the only thing it rules out is that you don't care at all.  Which is exactly what you're trying to convey.”

Anxieties about the intermingling of professionals and amateurs and how people express themselves online are not new. Before the smartphone enabled any crank with mad keypad skills to broadcast any half-considered thought into the universe, critics like Andrew Keen, John Freeman and Lee Siegel wrote polemical books protesting the rise of enthusiasts.  Their book titles featured hyperbolic phrases like “The Tyranny of Email,” “How Today's Internet Is Killing Culture” and “Being Human in the Age of the Electronic Mob,”  and their arguments weren't much better.  “Amateur hour has arrived,” declared Keen, “and the audience is now running the show.”  Freeman wrote that the inundation of email had “given birth to the most politically and culturally passive generation the world has ever seen.” Siegel wrote, “But without the comparative standards offered by antecedents and predecessors, the effect of such chaos and randomness is to induce a general insecurity, and to make conformity the only standard for success.”

What these pundits truly feared – in an epoch before Netflix, Tumblr, Twitter and Tinder altered the way we chronicled and defined American life – was the rise of active rebels who would, by way of sheer curiosity and boundless enthusiasm, lob righteous stones into the glass windows of the gatekeepers.  Anyone with an original voice and expertise on a subject could start a blog or upload a video, attract an audience, and stand toe-to-toe with the finest newspapers in the world.  There was no apparent science behind the rise of Keyboard Cat or some creepy character in a basement eviscerating George Lucas through several very long videos.

Much like the rebels who briefly took over Hollywood after the success of "Easy Rider," a generation of bloggers was positioned to seize the means of production.  (Many of them did find work with newspapers.)  There were no likes or +1s or reposts.  There were only comments.  The notion of being “well-liked” meant more than a vulgar metric appended to the bottom of a blog post.

But as bloggers flocked to Tumblr and animated GIFs replaced many thousands of words, the audience for brash individual viewpoints transformed into a more group-oriented one.  Much of online expression became driven by cultural juxtaposition over active response. If you said anything dangerous, there was always the penalty that your thoughts wouldn't be favorited or reblogged.  Websites like Cracked and BuzzFeed catered to this crowd-pleasing with the listicle: an ordered list that cheapened the marvels collected by the early Internet pioneers into crass link bait designed to generate penny-ante ad revenue.  Our passions were sentenced to commodification.  And if we didn't participate in this brave new world, which emerged from the Great Recession's unforgiving shrapnel, then our space would be forever surrendered.

On Sept. 9, Valleywag collected a series of vile and racist tweets published by Business Insider's chief technology officer Pax Dickinson.  When technology entrepreneur Anil Dash called Dickinson an asshole in response, Dickinson replied, “really, dude? You know we work in the same building right? Would you like to come call me an asshole to my face tomorrow?”  The exchange lost Dickinson his job.

But Dickinson's tough-guy gesture to shift the conflict from the digital world to the real reveals how Twitter has become the new workplace, in large part because today's workers have no private place to retreat.  According to the International Management Facility Association, 70 percent of American employees now toil in open-plan offices.  They have no private place to think or make a phone call.  They are more stressed.  They get sick more often.

But they do have Twitter: a digital space that offers a seemingly more acceptable balance between the public and the private in office life.  Yet the ease of letting off steam has caused disgruntled employees to forget that they are being watched.  In December 2011, three congressional staffers tweeted about on-the-job drinking inside Rep. Rick Larsen's office and were promptly fired.  In March 2011, comedian Gilbert Gottfried lost his voice-over gig as an insurance company duck after tweeting insensitive remarks about the Japanese tsunami. Earlier this year, Microsoft creative director Adam Orth angered the gaming community by expressing his desire for an Xbox console that was “always connected.” His tweets were private. But they were outed by gamers. Orth lost his job.

And because any worker can be fired over any tweet conveying any rash emotional impulse, the new workplace of Twitter has been forced to absorb some of the very behavior that was once found in the real world.  The passive-aggressive office memo found a second home online.

Four years ago, before Twitter became a hotbed for passive-aggression, David Denby tracked the evolution of mealy-mouthed sarcasm from its beginnings in Spy, a satirical magazine ostensibly created to expose and ridicule New York power. Denby argued that snark, which he called "investigative reporting's bastard, weak-limbed child," was severely limited in range. Spy and its many imitators had "instructed its readers on how to permeate the money culture while preserving the right attitude of superiority to it."  Yet when it came to doing any lasting damage in the name of principle, Spy stopped short because its proprietors -- Graydon Carter, now the editor of Vanity Fair, and Kurt Andersen, now the host of "Studio 360" -- ultimately wanted to belong.

In October 2010, GQ's Teddy Wayne declared the Awl “probably the closest thing on the Internet to the much-imitated Spy magazine of the '80s and '90s.” Not long after, Awl editor Choire Sicha, who spent years feeding what New York's Vanessa Grigoriadis has shrewdly identified as “the anxiety and class rage of New York's creative underclass,” honed a routine of sarcastic exclamation marks and insincerity for the new digital workplace.

In the last year, Sicha has begun to engage in “hate-favoriting,” where starring a tweet to broadcast your approval of someone else's message is inverted to express the opposite sentiment. The Wall Street Journal reported that Sicha favorited 150 tweets in a 24-hour period.  “I also use it to back one side during a fight,” said Sicha to the Journal, “when two people are going at it and I don't want to get involved.”  The bigger question is why someone like Sicha feels the need to watch rather than help. “When someone is totally awful,” said Sicha, “hitting 'favorite' is the most perverse thing you can do.”

Sicha is wrong.  The most perverse thing you can do on Twitter is to give someone the benefit of the doubt. The most dangerous thing you can do is to put forth an independent viewpoint and take the risk of losing followers to expose a greater truth.

It is no accident that the term “passive-aggressive” originated from a 1945 U.S. War Department bulletin that described soldiers who avoided their duties by deliberate incompetence and constant procrastination. Today's world presents an equally uncertain future with furloughed employees and NIH patients suffering during the government shutdown, income inequality, upheaval in other nations, and alarming revelations about how much we are surveilled by the government. Some, like BuzzFeed's Myles Tanzer, have suggested that "sneak-dissing" one's enemies is a faux pas that has fizzled out.  But with journalist Tim Carmody still trash-talking tech reporters without naming them, I'm not so sure. Do we really want to use Twitter, an instrument used to recruit volunteers for hurricane relief through Occupy Sandy and that inspired revolution during the Arab Spring, for something as pusillanimous as the subtweet?