How Wall Street could profit from cheating (on spouses) 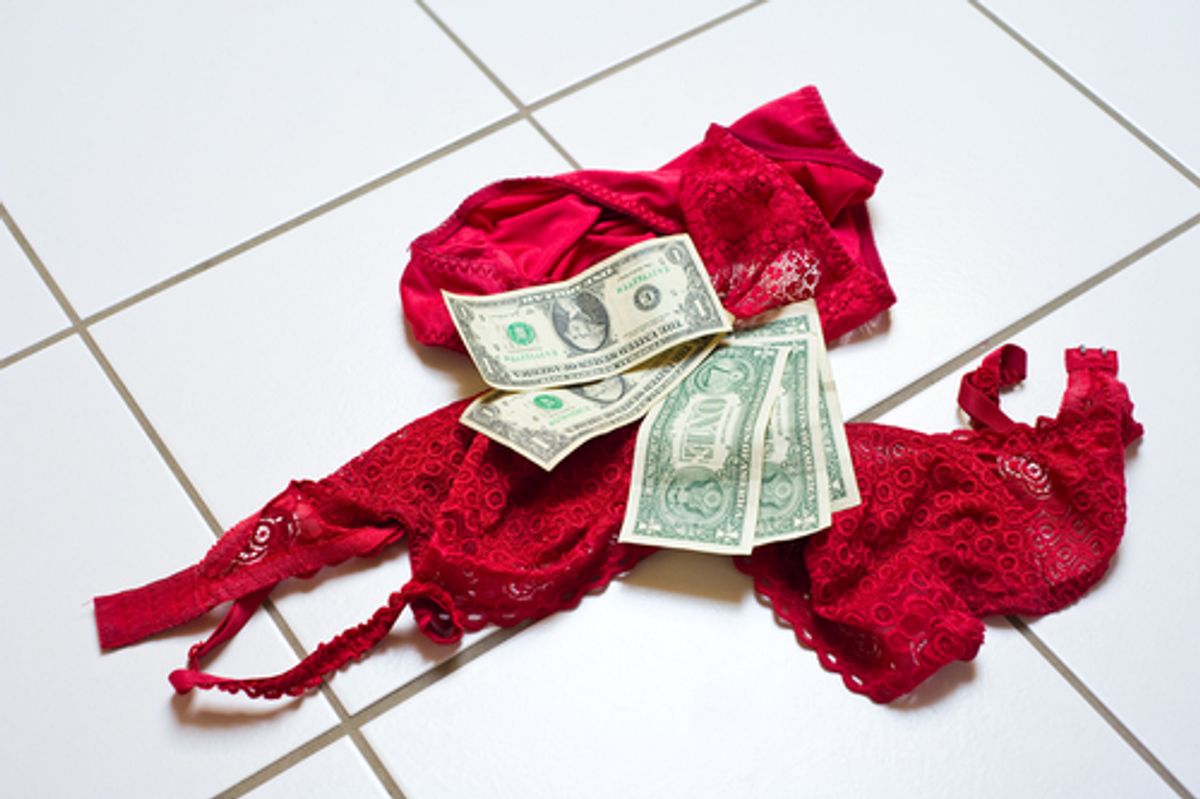 The wizards of Wall Street never leave your side. They’re on hand to make money off you at every stage of life — in sickness and in health, for richer for poorer. They even turn a profit when you die.

So it should probably come as no surprise that they’re now poised to reap rewards from your adulterous affair. One thing you can say about Wall Street: They know from cheating. And cheating is big business in America.

Sin is lucrative, and financiers feel it is their solemn duty to get in on any activity that legally (or quasi-legally) makes a profit. That includes gambling, smoking, drinking (even raves), and now, bless their clever souls, playing around on your spouse.

Wall Street knows that the path to fulfillment in America is paved with self-indulgence, and they would very much like to assist us in cultivating our appetites for sexual and material gratification. The Journal of Couple and Relationship Therapy finds that nearly 50 percent of married women and 60 percent of men will stray outside the marriage for sex at some point. Before the Internet, Wall Street wasn’t able to cash in on all that hooking up. But times have changed.

In a long-ago epoch, people searching for extramarital fun would have to cruise conferences, warm bar stools, or try their luck with classified newspaper ads. Today, it’s easy to let your fingers do the walking. Websites like AdultFriendFinder.com and Fling.com offer semi-anonymous hookups. Craigslist’s Casual Encounters will give you just that, whether your idea of casual involves phone sex or shemales.

What if you just want to have a good old-fashioned affair, complete with dinner dates and actual conversation? The stuff you used to do with your spouse? That’s where Ashley Madison comes in with its cheerful slogan: “Life is short. Have an affair.”

Born in Toronto in 2001 and christened with two popular and innocent-sounding baby names, Ashley Madison promotes the somewhat paradoxical idea that you can have a great open marriage—even if your spouse doesn’t know it’s open.

Diving into Ashley Madison, which has its own blog and Twitter feed, is like entering a weirdly compelling parallel universe where the rules you’ve always been taught do not apply. The tone is breezy, upbeat and nakedly commercial (“First Date With Your Affair Partner? 6 Online Shopping Experiences to Help You Look Good for Less and Seal the Deal”).

Content is mildly cheesy, often crass (Fingerbanging 101), but at times even touchingly earnest (hey, this isn’t just a fuck-buddy, it’s a human being!). In this realm, the American Way is clearly life, liberty and the pursuit of infidelity.

Naturally, people have been signing up in droves. In a recent Newsweekprofile “Wall Street Loves a Cheater,” Lynnley Browning reports that membership has “nearly quadrupled over the last five years, to 12.7 million in the United States and another 8.3 million overseas in 30 countries.”

Who are these people? Reports reveal that the Ashley Madison membership community is 70 percent men and 30 percent women. America’s top cheating city, according to company data, is Washington, D.C., where over 6 percent of residents have paid memberships. (Founder Noel Biderman reports getting perplexed calls from the Justice Department and the IRS about inexplicable credit card charges.) The company also found that the top alma mater for cheaters is the University of Minnesota (we did hear of interesting goings-on in the Minneapolis airport bathroom). It looks like the Ivy Leaguers are finding their action elsewhere, perhaps through high-end escort services. Or there’s always the pool boy.

The site plays masterfully on the psychological needs of the cheater, whether it’s boosting self-esteem (“Be The Cool Confident Male You've Always Wanted To Be”), depression (“It's Fall. Keep Your Mood Up By Having An Affair”), or excitement (“How To Buy Your Affair Partner A Sex Toy”). I couldn’t help but wonder how many cheated-on spouses might enjoy the sort of fun the cheaters were signing up to have with their new friends. But obviously people go to Ashley Madison for something they can’t seem to find—or to offer—in their marriages.

The business of cheating

Users of Ashley Madison buy credits to cover email and chat conversations with potential affair partners on an internal system. Only men pay for credits. Women can join and chat for free, and according to reports, many of them are just looking for cybersex, while some are clearly searching for sugar daddies. There are special programs available to make cheating easier for business travelers. Cheat on the go!

At first, it looked like Ashley Madison might be too hot even for hedge funds to handle. But quaint ideas like those expressed by Vanguard’s venerable chieftain John Bogle about the positive role business should play in society are getting chucked aside in the search for easy money. And Ashley Madison is buckets of easy money. Newsweek reports that it hauled in $30 million in profits on $90 million in revenues last year, and expects $10 million more in profits this year.

Canadian hedge funds have already raked in piles of dough, over $90 million in cash dividends since 2009, according to Biderman. Newsweekreports that New York-based hedge fund Fortress Investments, which boasts $54 billion in assets, has signaled interest in loaning $50 million to Ashley Madison's privately held parent, Avid Life Media, over two years. Other financiers have come sniffing around to talk about a possible initial public offering, equity stakes and licensing.

So what sorts of Wall Street firms throw potential PR headaches aside and jump into the adultery business? Let’s take a moment to look at Fortress Investments.

Fortress, which went public in 2007, is long on sin and suffering—turns out there’s plenty of both to cash in on. The firm was founded in 1998 by a BlackRock veteran and a couple of UBS guys. Former presidential candidate and famed adulterer John Edwards was paid oodles of money as a consultant for the firm, which then helped fund his race for the White House. Along with the other good folks at Fortress, Edwards made a nice pot of money when Katrina devastated New Orleans and Fortress’ subprime mortgage division filed foreclosure suits against victims.

In 2007, Fortress hooked up with Centerbridge Partners to acquire Penn National Gaming, which operates casinos and horse racing venues. Fortress also saw money to be made in torturing animals, and loaned millions to animal testing company Huntingdon Life Sciences until animal rights groups pressured it to drop ties.

Remarkably, Fortress’ Mike Novogratz recently told CNN that America’s CEOs need to have a "moral revolution.” Like everything else on Wall Street, that’s rich.

Whether or not you think of adultery as a sin—and there’s plenty of hypocrisy to go around on the topic—it sticks in the craw that yet again, Wall Street has found a way to encroach upon our lives.

Note to cheaters: if you think they won’t figure out a way to leverage all the personal data you're giving Ashley Madison, think again.