Ignore most conservatives attacking Healthcare.gov -- but it's a mistake to assume Obama's got it under control 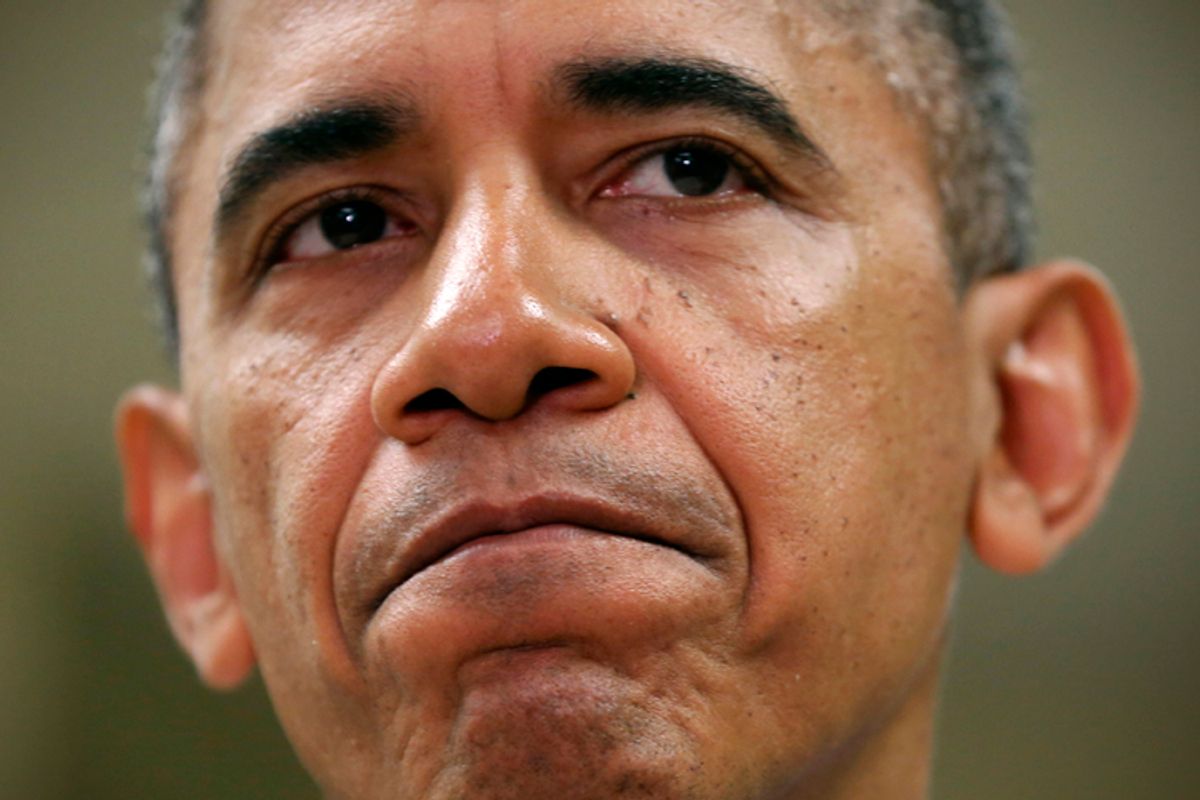 Let's stipulate that the conservatives crying crocodile tears for uninsured Americans who've been badly inconvenienced by broken Obamacare websites are engaged in a world-historical performance of organized concern trolling. If you're a reporter or a news junkie or a constituent, you should be absolutely clear that these people don't want Healthcare.gov to work and are making wild, unsupportable claims to discourage people from becoming insured.

Let's also stipulate that anyone using Healthcare.gov as a synecdoche for inherent vulnerabilities in the broader liberal project is being deceitful or stupid. If the website doesn't get fixed, it will mean big problems for Obamacare. It would be a tragedy, and an unforced error of massive proportions. But nobody disputes the idea that a site like Healthcare.gov is a workable idea in principle, and Healthcare.gov's failures don't detract from the overwhelming successes of the New Deal and Great Society programs. If the New Deal consensus were so easily undermined, then what the hell have conservatives been fighting so hard for the past 80 years?!

But I disagree with my colleague Joan Walsh, who argues that liberal writers should dial back their criticisms. That attempting to determine and accurately depict the nature and scale of the problems enables "completely unbalanced and unhinged coverage of whatever the problem may be."

Generally, I think Healthcare.gov's early failures have provided the left an opportunity to prove that it is in better epistemological shape than the right, and the left has taken it. That's good for liberalism, and good for the people who write about domestic politics from the left.

But the upshots aren't entirely abstracted from the technocratic challenge of making Obamacare work.

Liberals are contributing to the ongoing public relations fiasco, but that's a good thing for the law. If the only people making noise about Healthcare.gov were its avowed enemies, decision makers in the administration would be much more likely to create false bases for denying the extent of the challenges. If Ezra Klein and Ryan Lizza say Healthcare.gov is a giant mess and the stakes for fixing it enormous, they're likelier to listen, and respond as best they can.

That applies even more vis-à-vis the objective nature of the technological blunders, as opposed to the easier-to-describe subjective experiences those blunders create for consumers. It pains me to say this, but I think Joan is giving Obama and his administration too much credit in assuming they have a handle on the essence and scope of the problems. Obviously they know it's bad. But it's still unclear why they were so blindsided, and what precise steps they have taken to assure that trusted intermediaries with technical expertise are giving Obama a clear-eyed assessment of the challenges now that the site is live and the open-enrollment period slowly closing.

We know that Obama has assembled a tech team, including some trusted outside experts, to fix Healthcare.gov. Hopefully some of them are providing Obama and his top aides a better-than-blinkered assessment of the architecture and how long it will take to repair. Hopefully that's why Obama pronounced with such confidence on Monday morning at the White House that the site will be fixed.

But we don't really know for sure.

About a month ago, I attended a background briefing with senior administration officials -- both communicators and policy experts -- in advance of Healthcare.gov's big launch. It was clear they believed there'd be some snags, but it was also clear that they believed the site's problems would be fixable and that it would be the main point of access for consumers before the end of the year.

Yesterday, at a similar briefing, officials de-emphasized the importance of the website and, three weeks after launch, said that they've deployed more human resources to enroll people via other channels. They were unable to provide layman's explanations of the site's architectural flaws, and if they're confident that it would be working well enough to provide consumers a reliably decent experience in short order, they didn't convey it in the West Wing on Monday.

One official did say, "It’s our expectation that the ability of folks to go through beginning to end will be sufficiently enhanced by the time we hit November that folks can go through.” That would moot a lot of the concerns, and most of the concern trolling, too. But the officials also said that problems were still being diagnosed, which suggests they don't necessarily have a complete grasp of their extent, and can't be sure that fixes won't create a cascade of new problems.

I asked whether there's any chance that the system can't be fixed with serial tweaks.

"We don't believe that to be the case," the official said.

The officials said that they're not yet drafting contingency plans, in the event that the technical challenges prevent them from enrolling enough people to make the markets viable. But they also emphasized that the law gives the administration latitude to relax certain provisions if they ever reach that point

"The law as written provides a great deal of flexibility to make sure that no one who is trying to get insurance, or can't afford insurance … that you are not going to pay a penalty."

If we're really not facing the possibility that the site won't be working by early next year, why would the law's flexibility matter?

Being sanguine about these issues won't get them resolved any faster, and won't do anything to prevent the administration from becoming dispirited and letting the window they have to buoy the system close.

No matter what the press has done, nobody who's actually in the market for insurance would have mistaken the rollout for a success, and what ultimately matters is making sure the website becomes a reliable service for consumers. Without enough consumers the law won't work right and if it doesn't work right the recriminations will be thousands of times worse -- for Obama, Democrats, liberalism and the uninsured -- than they have been so far.