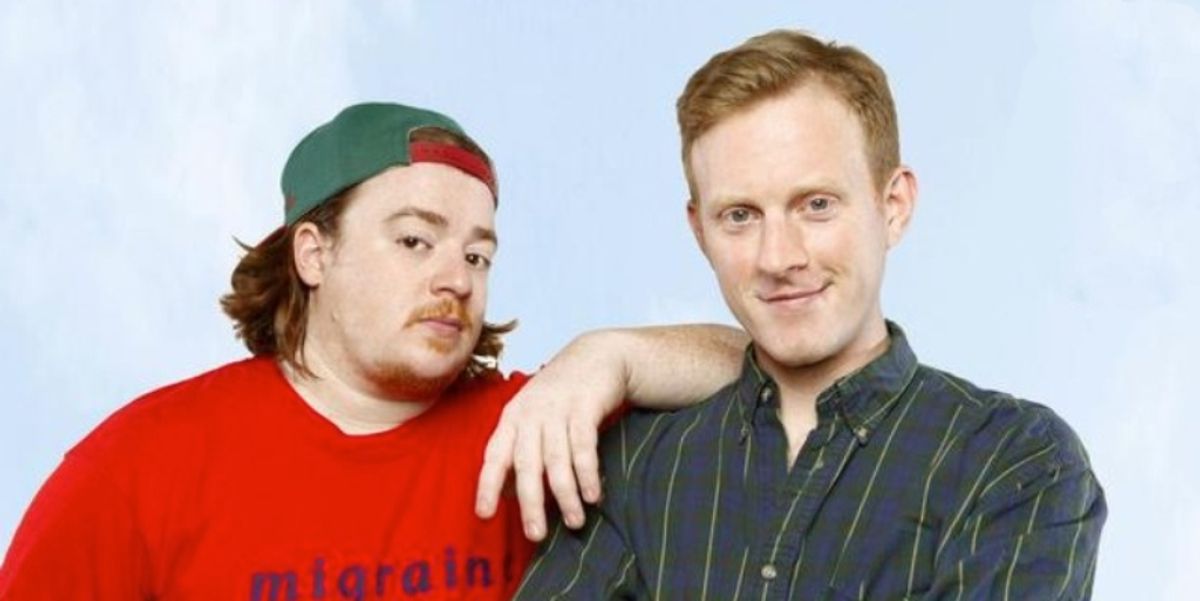 For fans of the mid-’90s Nickelodeon sitcom The Adventures of Pete & Pete, the news that actors Mike Maronna (Big Pete Wrigley) and Danny Tamberelli (Little Pete Wrigley) now have a podcast was likely met with the same reaction: Holy shit, Pete and Pete have a podcast?

Two decades later, The Adventures of Danny & Mike is their new monthly medium, in collaboration with Feral Audio and produced by Jeremy Balon and Marianne Ways. The first episode was released in September, recorded live from the Portland PetesFest. The popularity of the Nickelodeon show has followed Maronna and Tamberelli—who are now in their 30s—over the years, creating aLebowski-like level of organized fandom and necessitating several cast reunions.

Comedian Chris Gethard guests on their second and latest episode, “Ghost Hunting,” in which they and co-host Balon discuss Tamberelli’s voice acting in Grand Theft Auto V (he voices Jimmy De Santa), Craigslist Missed Connections, and how Gethard once took a date to an abandoned mental hospital. Like many comedy podcasts, there’s a lot of riffing from these self-described “infinite children.”

Via email, the guys answered a few questions about how they’re shaping the show, Pete & Pete fandom, and how podcasts are like food trucks.

Why start a podcast?

Danny Tamberelli: We had been having such a good time at the reunions and thought it would be fun to work together again, messing around and busting chops. Podcasts are easy to coordinate with our schedules.

Mike Maronna: Podcasts are the food trucks of the Internet. They were a good idea, but then waaaay too many people thought they could have one. We are just trying to hasten the totally justified end of podcasts as a thing. Could not happen soon enough.

How are you choosing your special guests? Who are some of your favorite comedians right now?

DT: We choose our guests based on people we think are funny. We've also picked two guys who had us on their shows, so we kinda roped them in. [I like] Jon Daly, Kumail Nanjiani, Doug Benson, and Tig Notaro, to name a few.

MM: I tried to think of comedians I would like to get with… Aparna Nancherla, Beth Hoyt, Kurt Braunohler.

And what about the theme? How do you choose that?

DT: We choose the themes based on whatever specific adventures we were thinking about. We want to bring back those nostalgic feelings of youthful stupidity, adventuring, relationships, and other mischief.

MM: We stick Jeremy [Balon] in an old clothes dryer in a junkyard and throw children's toys and dolls in there until he comes up with something. Something that doesn't involve too much travel. Danny is like B.A. Baracus in that he hates to fly and we have to tranquilize him heavily in the event of any planes or helicopters, fool!

How has the fandom around Pete & Pete sustained itself throughout the years? And how has it evolved?

DT: It really never changes. The age range has just expanded. People who are really into Pete & Pete seem to relate to the left-of-center world. I'd say 99 percent of the fans would be someone we'd catch a beer with at the bar. It’s a cool thing.

MM: Now those people who got married because of the show have kids. And they have to put their kids in school. And they have to get vaccinated. And they're really scared of needles. And the doctor will remind the kid that with a name like Artie, the Strongest Man in the World, this little old needle should feel like nothing.

MM: Not really a podcast guy, per se. What? We have to do this? To get on other podcasts? I don't really listen to podcasts but I'm gonna start. You better believe I'm gonna start, Mary! I promise. Gimme some pointers.

MM: I like Marlo Meekins' and Aparna Nancherla's Vines. Ginger bias? You be the judge. I will also vine from set occasionally.

MM: Too lazy/busy to get to the Banksy pieces, even though there's one right in Greenpoint.

What's the strangest thing you've ever seen or sold on Craigslist?

DT: This is one of my favorites. I used to live on 3rd and C, so I feel like I walked by this guy before.

MM: My friend has posted rants about the Mets on Craigslist that take the cake. I stopped reading Missed Connections a little while ago, but I do sometimes get the urge.