The Smithers Test: How TV fails to depict gay characters 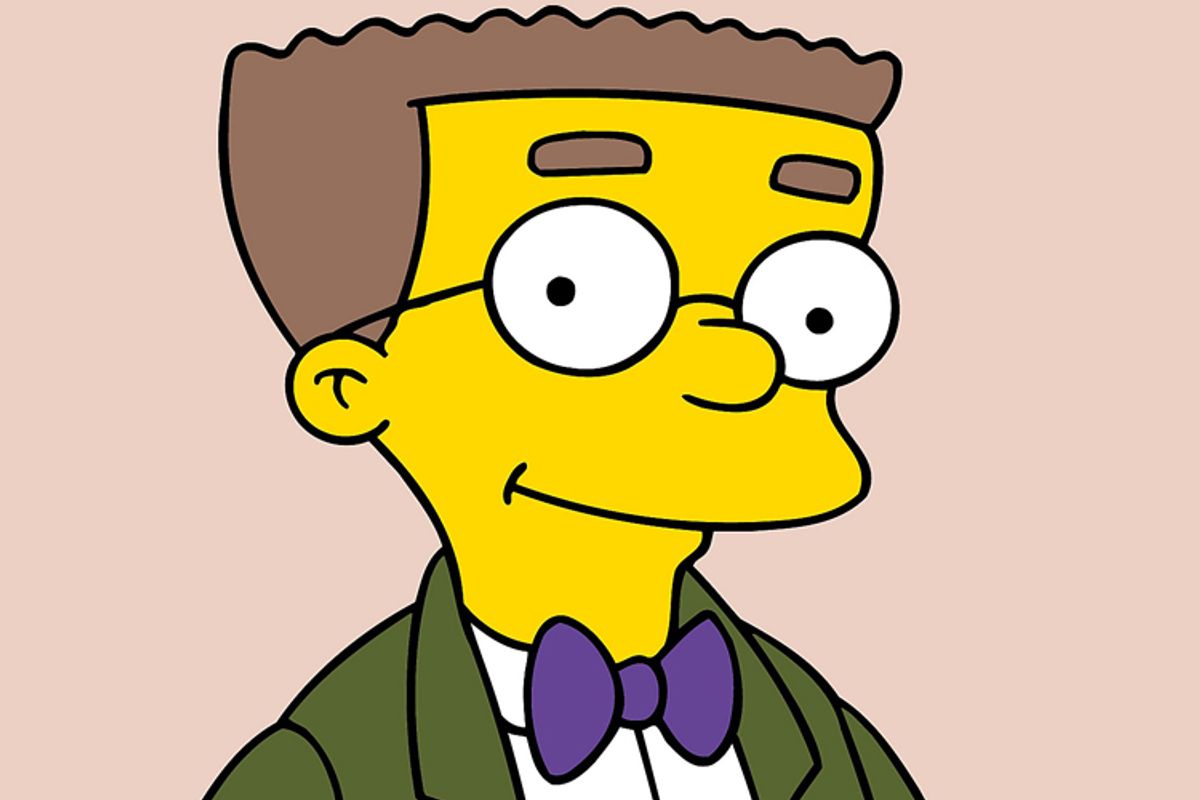 It's not always about numbers.

Earlier this month, GLAAD released a set of figures about the new television season; the advocacy group listed a number of television shows that had featured gay characters as a general sign of progress. The more, the better, right?

Well, not exactly. Shows coming in for praise included "Survivor," where a gay contestant was depicted as being tokenishly adopted by a female contestant; "The Simpsons," which is "sometimes a source of offensive content" but which still features Waylon Smithers; and "Law and Order: Special Victims Unit," which was inclusive because it featured a gay murderer of closeted men.

Sure, this is representation; television is becoming yet more aware that gay people exist. But is it aware, at all, that gay people exist as more than the sum of what they do in bed? Much like Apu, his South Asian costar on "The Simpsons," Smithers elicits guilty giggles but feels somehow retrograde. He's funny because he's a desperately lonely, effeminate gay man who collects dolls. He's a gay character on television, but he's more gay than character. It's an open question as to whether or not the character would be put on "The Simpsons" were the show debuting in 2013, but as antique as the assumptions underpinning Smithers are, he's hardly out of place on TV. When the mere fact of a gay character is still startling or worthy of comment, the portrayal's not likely to be a masterpiece of empathy.

Television has had trouble depicting gay people as, well, people; there's not yet been a gay version of "The Cosby Show," the stratospherically popular sitcom that framed, for a broad audience, a black family as the typical American family. The now-canceled "The New Normal," last season, was an attempt, but alternately indulged and rebuked gay stereotypes with its butch-femme central couple. One partner was so gay, very into fashion. The other was so not -- he loved watching sports! Anecdotally, real gay couples do not think, on a daily basis, about how traditionally "gay" they are acting in comparison to one another.

Call it the Smithers Test: Does a gay television character serve a purpose other than engaging with outdated stereotypes? Many straight characters across the dial live, love and laugh about all manner of things; they're not the sum of their dating lives and aren't governed by stereotypes about how straight men or straight women should act. But from Smithers -- who exists to play out a mocking image of gay men -- to the hirsute, messy Max on the departed "Happy Endings" -- who was a waddling gay joke for the constantly-remarked-upon reason that he wasn't like other gay guys -- television is very good at commenting upon how gay people are perceived in our culture and less good at portraying gay people. It's an endless feedback loop: Television has the power to create or reinforce stereotypes, and then it slyly comments upon them, as well.

There are some good gay characters on TV: Andre Braugher's police chief on "Brooklyn Nine-Nine" has many traits other than his homosexuality. He's gay, and his un-gay-ness is the subject of some humor, but he's also a very competent boss. By all accounts the lesbian central couple on "The Fosters" have rich inner lives. It's really not that hard to draw a gay character who thinks or talks about things other than how "gay" they act; "Happy Endings" came close, too, but the degree to which the show couldn't stop patting itself on the back for showing a gay man who didn't cohere with stereotypes made the character feel like he only existed as a comment.

It's startling that "Will & Grace," so often cited as a path-breaking television show in the depiction of gays on TV, changed so little. The show was riddled with silly and stereotypical humor, but it also showed Will and Jack as people with aspirations entirely disconnected from their sexuality. Both wanted to move ahead in their careers, for instance. Both had thoughts about their relationships -- sexual and otherwise -- that felt like the thoughts of real humans, not gay cardboard cutouts.

Perhaps the more influential show is the one that recently celebrated its tenth anniversary -- "Queer Eye for the Straight Guy." The show got a lot of press and praise when it came out for featuring five gay men: "lifestyle experts" who were endlessly benevolent and helpful, sassy when warranted, and obsessed with the finer things in life. They existed to confirm the idea that most gay people were this way; their inner lives were negligible. That's the sort of representation that continues on television into the 2010s -- and a sort that confirms the idea that Smithers isn't the only two-dimensional gay man on TV.