What makes a snack “healthier, safer and better” instead of just weird? 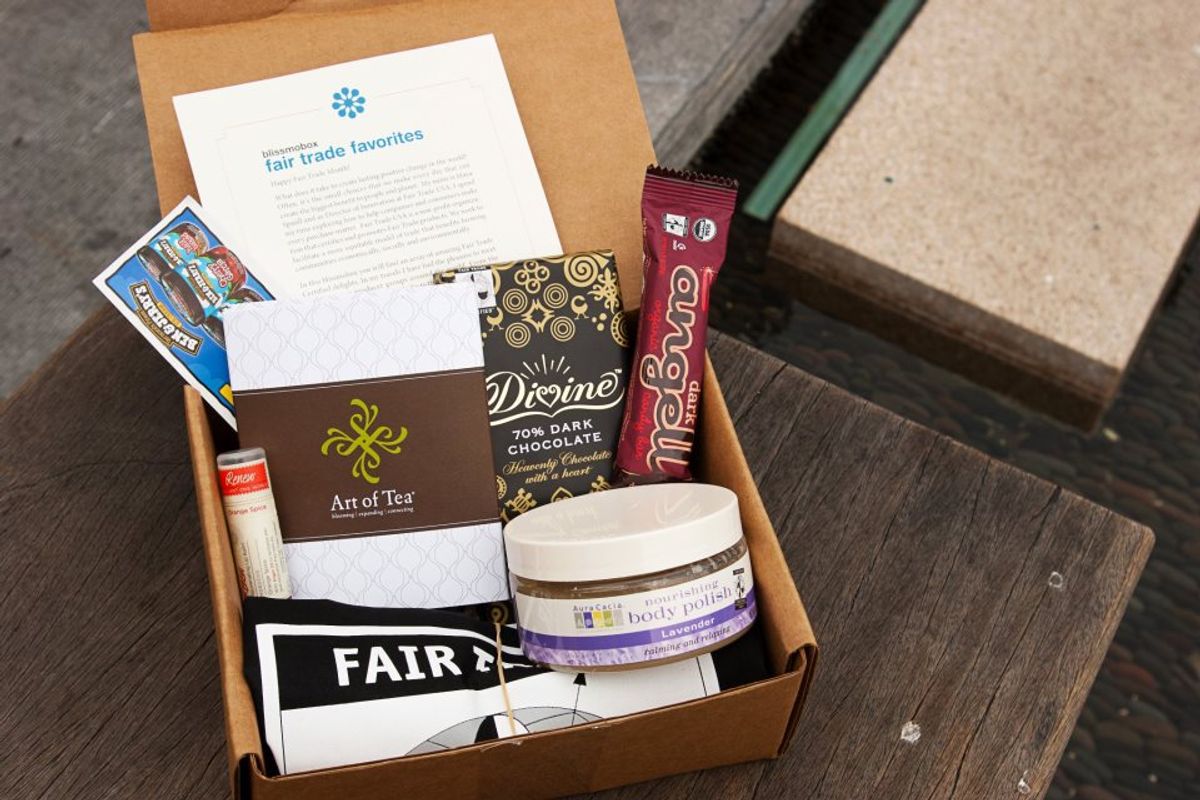 No matter how old I get, I don’t think I’ll ever grow out of the pure glee and excitement of receiving something unexpected in the mail. It’s the favorite thing I’ve always identified with most: The appeal of bright copper kettles and schnitzel with noodles is lost on me, but brown paper packages tied up with string are, I’d argue, one of the best things life has to offer.

It’s a bit surprising, then, that I never bought into the subscription box trend first popularized by Birchbox. The premise is the sort of thing someone like me would go for: For a recurring fee, a curated collection of surprise goodies will be sent to your doorstep each month. In the past few years, a number of such “membership clubs” have launched. If I was going to start anywhere, I figured it should be one with the potential to improve my lifestyle.

So here's what I ended up with when I sent away for a Blissmobox, which takes the basic subscription model and applies it to green consumer goods. (I chose the “savory snacks” option; in a typical month, subscribers can choose between that, beauty supplies and a third, usually seasonal, theme.) Inside the shoebox-size package, nestled in brown confetti, were a loose assortment of snacks and other edibles, all plastered with phrases like “all natural,” “certified organic,” “dairy-free,” “soy-free,” “GMO-free” and “gluten-free.” It was packaged food aggressively asserting that, from the way it was produced to the health effects it promises, it was better than everything else I’d been eating.

I spent the next month snacking, the box perched on the corner of my desk. About half of the treats I received were recognizable – they simply claimed to be better, in some way, than more conventional alternatives. The potato chips claimed to be carbon neutral and kettle cooked “in a unique process that delivers 30 percent less fat” than regular chips. The macadamia nut mix was sourced from a small farm in Hawaii. The jerky was made with 100 percent grass-fed beef and lacking in artificial preservatives. A small vial of naturally flavored drops – I’m sorry, “liquid water enhancer” – promised to encourage drinking more water by making it taste orange. The iced tea powder I’ve used in the past, by contrast, just promises not to add any calories to my diet.

Other samples I didn’t see coming at all. I can now tell you what sorghum tastes like: It’s kind of a grainy popcorn, but with three times the protein. As a bonus, the package of sorghum pops proudly stated that growing them required 50 percent less agricultural water than corn. And while I like egg whites, and I like chips, I probably never would have tried egg white chips if they hadn’t been sent to me. It was almost a month before I braved opening the bag. They turned out to be, if not a revelation, then at least a pretty tasty afternoon snack.

The one thing I didn’t try (aside from the jerky, because I’m a vegetarian) was the small vial of “Dream Water,” a “meditative drink” promising “all natural assistance in gaining restful sleep.” While restful sleep sounds nice, both the shape of the bottle and its guarantee not to leave me drowsy once the effects wore off bore a bit too much of a resemblance to 5 Hour Energy. I’m wary of any drugs – including alternative medicines – that arrive, unannounced, in the mail.

The edible green tea perhaps best exemplified what I was hoping to get out of my Blissmo box: It was something I would never have known existed, and would never have purchased anyway. But since it was here, I might as well mix it into my yogurt and see what happens. It tasted … green, and added some nice texture to an otherwise bland breakfast. Was I healthier? Did I go through the rest of my day with a sustained energy boost? Who knows? I can say I enjoyed the experience. And all other promises aside, when you spend $19.95 plus shipping and handling to send yourself a care package, that’s the best possible outcome you can hope for.

I’m considering eating more sorghum, which I guess could be a first step toward greener living. And I’m definitely healthier. Well, maybe. Packaged food is packaged food, even if it’s 100 percent vegan and only contains six ingredients and has 30 percent less fat than regular potato chips.

Sundeep Ahuja, who founded Blissmo, explained that the company has no way of setting benchmark standards for what kind of products they include. Most of the brands they’re affiliated with, though, do seem more or less committed to sourcing and producing their snacks with sustainability in mind.

Buying in bulk is arguably more environmentally friendly than receiving frequent shipments of individually wrapped items. In another gesture toward sustainability, at least, Blissmo does offset the carbon used in shipping.

I’m not sure that I feel green so much as I feel like I’ve entered into a certain class. The people I most identified with, as I made my way through the samples, were the women featured on boxes of Kashi cereal. You know the type: They live in San Francisco, buy organic everything and have impossibly flawless skin.

Ahuja’s go-to phrase -- “healthier, safer and better” -- explains best what Blissmo is trying to accomplish. The philosophy behind the curation of my Blissmo box is aimed toward creating an ethos in which the word “green” -- like “organic” or “gluten free” – manages to imply a higher plane of living … even if you’re not exactly sure how they’ll get you there.

-Blissmo, Ahuja said, has two main types of customer. The first is women who live in New York, L.A. and San Francisco, who have money and go to yoga and shop at Whole Foods. They discover new things through their Blissmo subscription, and then go off and buy more of them.

The second consists of people who live in Montana and Nebraska and Texas, and “frankly care less about sustainability, ” he said. What they’re looking for are “products that they’re being told are better for them, and better for their family,” usually by Oprah. For them, Blissmo is like Oprah, with the added bonus of granting them access to products that their local store might not carry.

-All of Blissmo’s customers, said Ahuja, can be characterized as people who love discovery. There are some subtleties, I think, between loving discovery and just loving surprises. I didn’t really have the urge to go out and buy any of these products, but I can imagine looking forward to the box’s arrival every month, simply for the novelty of finding out what they’re going to think of next, and to save myself from the boring routine of pretzel sticks, granola bars and my other go-to snacks.

-As a New Yorker who’s been known to shop at Whole Foods, I definitely fit in more with the first customer type. But as a journalist, I feel I might have been more skeptical than most of the lofty claims each product made. That could explain why none won me over entirely.

“It’s been tough to get people to care about sustainability,” Ahuja admitted to me. “No one says they don’t want to buy sustainable. But at the end of the day, people have limited budgets.” He’s come to realize that “organic” is a buzzword that people will shell out for. “Green” hasn’t quite gotten there yet.

As such, Blissmo’s business model has shifted away from the original concept of introducing people to sustainable products, he said. They now sneak that part in there as part of the broader sell: “We sort of say, ‘All right, here’s why this is better for you. Oh, and p.s., it’s also better for your community and your planet.’”

A Blissmo subscription costs $19.95 per month, plus $4.95 shipping and handling unless you sign up for six months upfront. The combined retail price of the 10 samples included in my box was $21.95. To be honest, I was expecting the grand total to come in lower than that.

But Blissmo isn’t a bargain site, it’s a self-proclaimed “membership club.” Part of what you’re paying for is the pleasure of discovery. Be warned, though: a big part of the subscription box model centers around recruiting customers for the brands it promotes. You might be OK with adding some orange flavoring to your water once. But if you can never again go back to plain-old conventional water, the costs will undoubtedly add up.

Blissmo can deliver on its promise to broaden your awareness of all the green stuff that’s out there. And if you just like surprise presents, it’s pretty good for that, too.