As a Native American woman, I thought my stereotypical costume was subversive. Now I know I was wrong 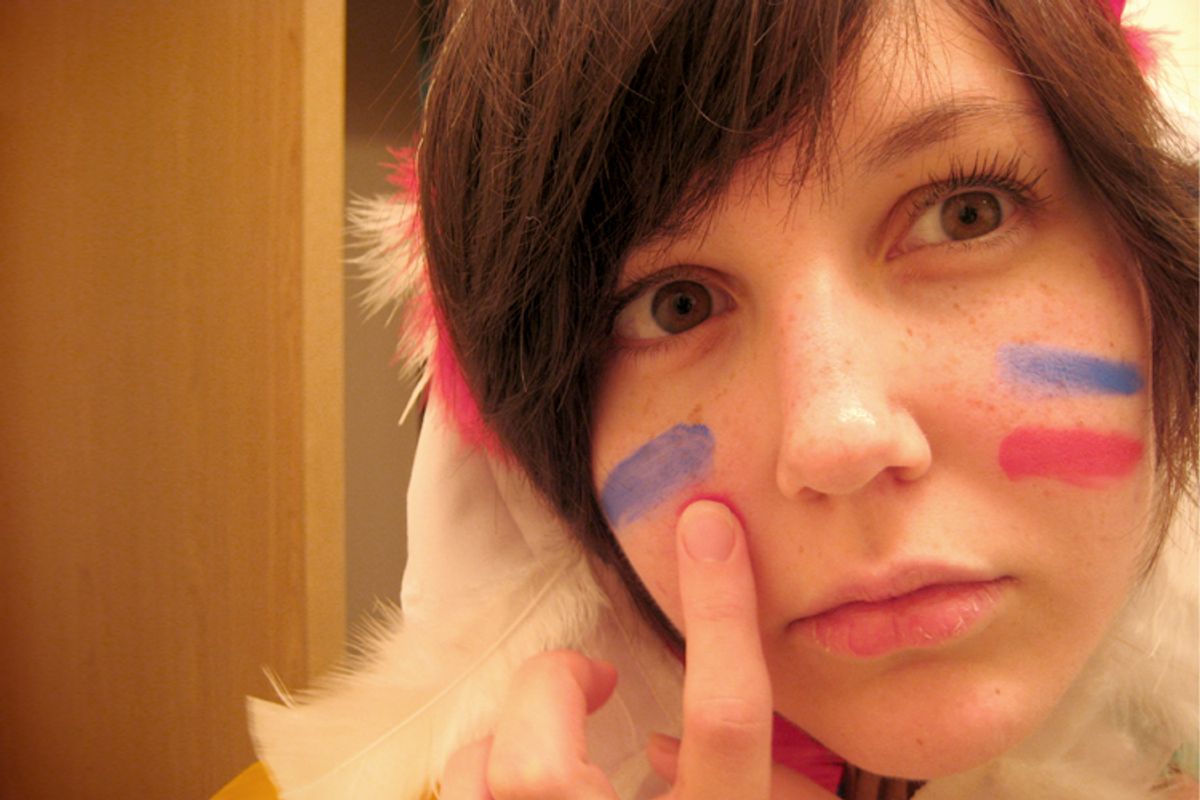 A photo of the author in her costume
--

Five years ago, I was 23 and didn’t have enough good sense to get myself out of the mall without a pair of impulse-purchased gold lamé stiletto boots or a hundred-dollar straw hat. Freed from the front-door check of a parent and lacking any limitations on my spending, I could live out my sartorial dreams. The knee-high boots I’d wanted at 13 were no problem, and in my new home of Seattle, no one looked twice at hoodie, lace and high-top combos. For my second Halloween in my new city, I bought a costume that haunts my memory like the worst kind of ghoul.

I’m not much for costumes, but a party invitation sent me to the basement of a vintage clothing store that, come October, looks like a pack of My Little Ponies vomited on the racks. I got so overwhelmed by polyurethane, taffeta, fake fur and prints of all persuasions that it was impossible to focus on any costume long enough to identify it as “Playful Panda” or “Marie Antoinette.” There was a half-wall devoted to the Wild West and the Native people as they have been imagined there, brave, fierce and tragic. Fringed and beaded polyester “buckskin” Pocahontas or Sacajawea costumes — the difference wasn’t clear, though the women lived a continent apart — mingled with fringed “leather” Buffalo Bill jackets for the men. Cowboy hats and rainbow-dyed faux-feather headdresses hung alongside soundless miniature drums, plastic tomahawks and knives, toy guns and holsters, cotton moccasins, and plastic breastplates and necklaces. There were chaps of all kinds. These lifeless duds lumped caricatures of indigenous peoples and colonizers together in peaceful coexistence, a state of pure make-believe.

The display appalled me. As a member of the Cowlitz Indian Tribe, a descendant of the Cascade/Watlala people, and a light-skinned Native with a bundle of identity issues, I was tired of the sludge I had waded through since the principal of my elementary school asked me in third grade whether my people would prefer to be called “Indians” or “Native Americans.” Too many times to count, I had stifled my desire to lash out when being told I wasn’t “Indian-Indian” because I don’t resemble an Edward Curtis portrait or being asked “how much” Indian I am so the admission of my quantum might explain whether I’m a bona fide full blood or a one-drop pretender. As far as much of the world was concerned, Hollywood had stuck all of us in the same museum case, thrust headdresses onto our skulls, and slapped up an exhibition label explaining that we knew everything about using all parts of the buffalo and nothing about how to tolerate alcohol. I come from salmon people who know rivers and work cedar, but the Columbia River Gorge must have been too far west for the westerns.

I pulled a “Naughty Native” costume out of its plastic sleeve. The skimpy patch of fabric, shredded at its bottom inch, was embellished with red and blue plastic beads. A limp headband and choker rounded out the look. Freshly embedded in grad school, I burst with guts and gumption. To hell with this costume, I thought. I was going to buy it. I was going to wear it, and I was going to make a point. I can’t recall what that point was, and I fail even when trying to fabricate one and impose it on the past. I do remember I was giddy about my rabble-rousing machinations, hoping my friends would catch the costume's wink. I was going to have to get it in XL, and I was definitely going to be wearing it over leggings.

I grabbed a kit of face paint and completed the look with the gaudiest headdress on the rack, a floppy, trailing rainbow of fake feathers. The night of the party, I applied the paint in two lines on each cheek, one red and one blue. Stuffed into my fake buckskins, wearing the false headdress of the wrong gender, I was a short-haired, Technicolor monstrosity.

Nobody called me out, but I panicked when I got word that another Native writer had arrived, a woman I had recently heard read but had never met. She’s going to think I’m some white girl dressed as an Indian, I thought. I kept a wall physically between us for half the night until I found both of us reaching for pumpkin cookies. “Hi,” I said, my stomach seizing. “I’m Elissa. I’ve heard you read — you’re great. I’m Native, too.”

I prepared for her to ask me to put a coat on and think of what my mother would say if she saw me, but instead, she smiled. “Hello there, sister. What nation are you from?”

After years of teaching American Indian Studies at the university level, including classes on Hollywood’s twisting of the world’s conception of Indianness, I have become deeply ashamed of my night in costume. The iconic Indian maiden — slender, servile and ready to be defiled under her fitted dress — is a rotten fantasy that spoils too many people's understanding of actual indigenous womanhood. In her sexed-up dress, the maiden becomes the spoils of war. By donning my own fake feathers, I subverted nothing. Instead, I excused Halloween racism, inviting anyone who met me to do the same — after all, they'd met an Indian girl who wore a headdress and everything. I know my ancestors saw my get-up, and I don’t think they found me clever.

Every Halloween, the campus population is peppered with people in costumes, their buy-in levels ranging from cat ears on a headband to a floor-length Jedi robe paired with an expensive-looking lightsaber. My students have their heads on straighter than I did, and I've never seen one of them dressed in one of the "Noble Warrior," "Hot on the Trail," "Pocahottie," "Tribal Trouble," "Sexy Tonto" or "Pow! Wow!" costumes I've seen for sale online. I hope that when the students step off campus, drop their books, peel off their university sweats and hoodies, and prepare for their night of spooky revelry, they remember that they're on Duwamish and Suquamish land.

I've had more than a thousand students in my university classes. I tell them about broken treaties and the forced sterilization of Native women. We watch "Twilight" and read poetry. I want to teach as many people as I can. Some days, my students' eyes widen as they spot instances of sexual colonization in scenes that would have looked like romance before the quarter started. Those days, I think I'm changing the world. Other days, like the day I noticed that someone had found my blog by searching for “Pocahontas tentacle rape,” I feel like nothing has changed.

All I can do is teach my way out of the heap, hoping my belly-born longhouse voice travels through the lecture hall’s back wall so living and dead will know I am sorry. My transgression was one of too many. But I alone did not cause this mess and I cannot fix it. Still, every day, I will rip at its seams.