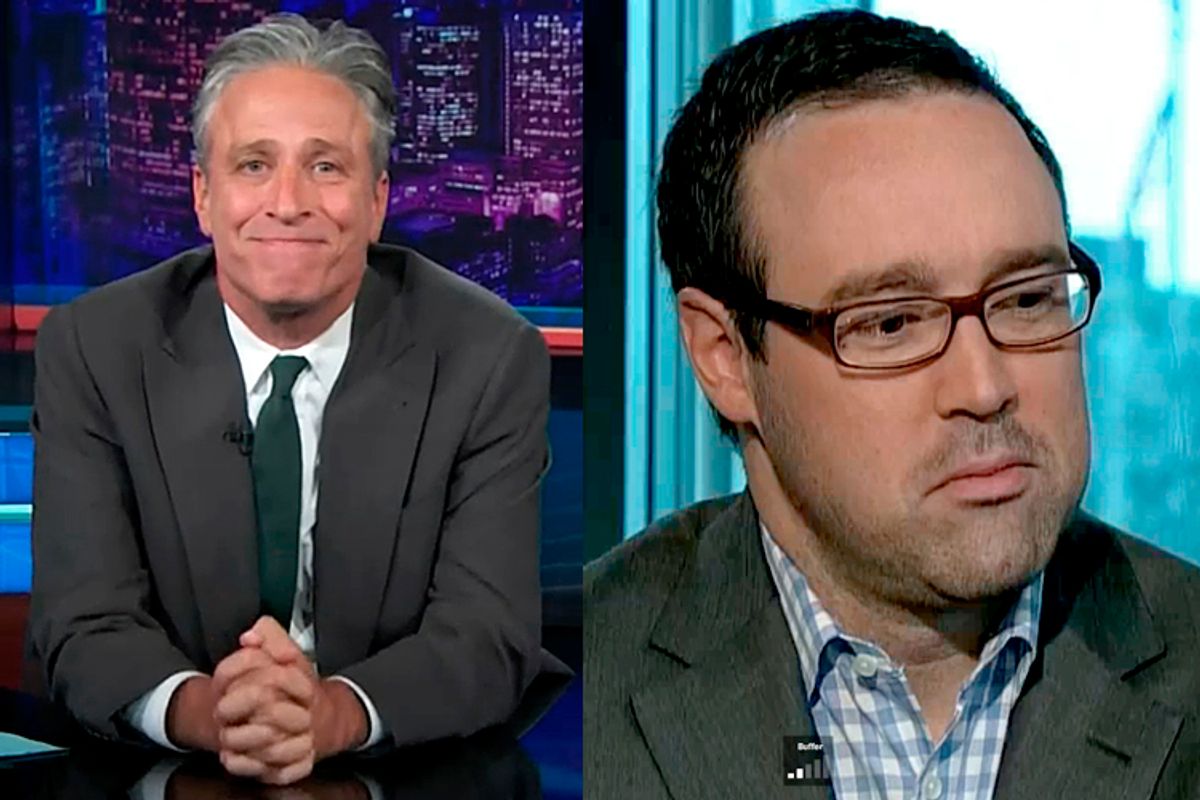 Washington Post political blogger Chris Cillizza has discovered President Barack Obama's "biggest problem." It is "fanatical Republican opposition to his agenda and a money-captured political system that gives a minority party a great deal of power to act on that opposition." Haha just kidding, no, it's not that, it's "Jon Stewart." You know, the funny cable show talking guy. The one who does the jokes that you like.

What makes Stewart a problem is that he has been strongly criticizing/making funny jokes about the Obama administration's major healthcare #fail this week. Cillizza explains: "Stewart dedicated the entire first 10 minutes of his show — three full segments — on Monday to slashing hits on the website and the president’s handling of the problems." That's right, "the entire first 10 minutes." Plus: "He compared Obama to 'Gil,' the hapless salesman from 'The Simpsons.'" Gil! That could cost Obama Ohio!

This is why it matters, according to Cillizza:

According to a 2012 Pew Research Center poll, “The Daily Show” has the second-largest share of young viewers — aged 18-29 — of any of the 24 media outlets tested.

That is indeed true, though "media outlets" should say "news sources." (The source with the oldest audience: "Hannity.") The Pew Report, though, does not say that "The Daily Show" is the exclusive source of news for more than a small subset of those young viewers. According to the same survey, nearly a third of the New York Times' readers are 18-29. Here's another fact: "The Daily Show" averages 1 million to 2 million viewers per night. That is a small fraction of the population. It is a small fraction of the young population. And those 1 to 2 million viewers per night are mostly pretty liberal, and will remain pretty liberal.

How will Stewart's criticisms hurt Barack Obama or the Affordable Care Act, exactly? Will his young viewers decide to avoid purchasing insurance on the exchanges? Perhaps. But viewers 26 and younger with parents who have health insurance are already automatically covered. The remainder constitute, again, a fraction of America's young population. And right now Stewart's point is that the exchange websites don't work, which is largely true. That is a bigger barrier to young people signing up than jokes about that fact.

Will Stewart's criticisms cause his viewers to abandon the Democratic Party, or the liberal project? Probably not as long as the point of the jokes is "this should work better," not "there shouldn't be universal health coverage." There are not many liberal "Daily Show" viewers who will switch parties in 2014 or 2016. Perhaps some of them will be less likely to vote at all, but "Daily Show" viewers are probably going to be much more politically aware and motivated than most young people, who rarely turn out in midterms anyway.

So, no, Jon Stewart is not Barack Obama's "biggest problem." He is not even a very big one at all. Do you know who is a much bigger problem, for Barack Obama? Mitch McConnell. And the Kochs, who are effectively undermining the ACA in the states. That's a bigger problem than a comedian comparing the president to Gil.

Cillizza's column didn't have to be so bad. There is actually a case to be made that Stewart is, sort of broadly, "bad" for liberalism, because in certain respects he is fairly conservative. He is affectionate, and even fawning, toward many conservative guests; his favorite guest in the years before the 2008 election was probably John McCain. He sincerely believes in centrist shibboleths about "civility" and so on. There are perhaps some young people in his audience who are being exposed to misguided respect for conservative "moderates."

He is not remotely a leftist, in other words, which isn't a problem except that, for the centrist political press, he represents the left. For all the talk of Youngs who only get their news from Jon Stewart, it is more disturbing -- and bad for democracy and governance -- that Olds get all their opinions about what Young People and The Left are thinking from him. Stewart is, really, a rather conventional 50-year-old Northeast liberal, with a mostly young (and white) writing staff of perhaps slightly more liberal people.

When he represents the left-most pole of the debate, the terms of the debate are going to range from center-left to far-right. That has been how political debates have played out in this country since the rise of the very conservative right-wing press was belatedly met with a more moderate "liberal media." Jon Stewart is only a "problem" when political analysts like Cillizza, who seems as allergic to genuine left-wing thought as he is to political science, overstate his influence and misstate his position on the ideological spectrum.