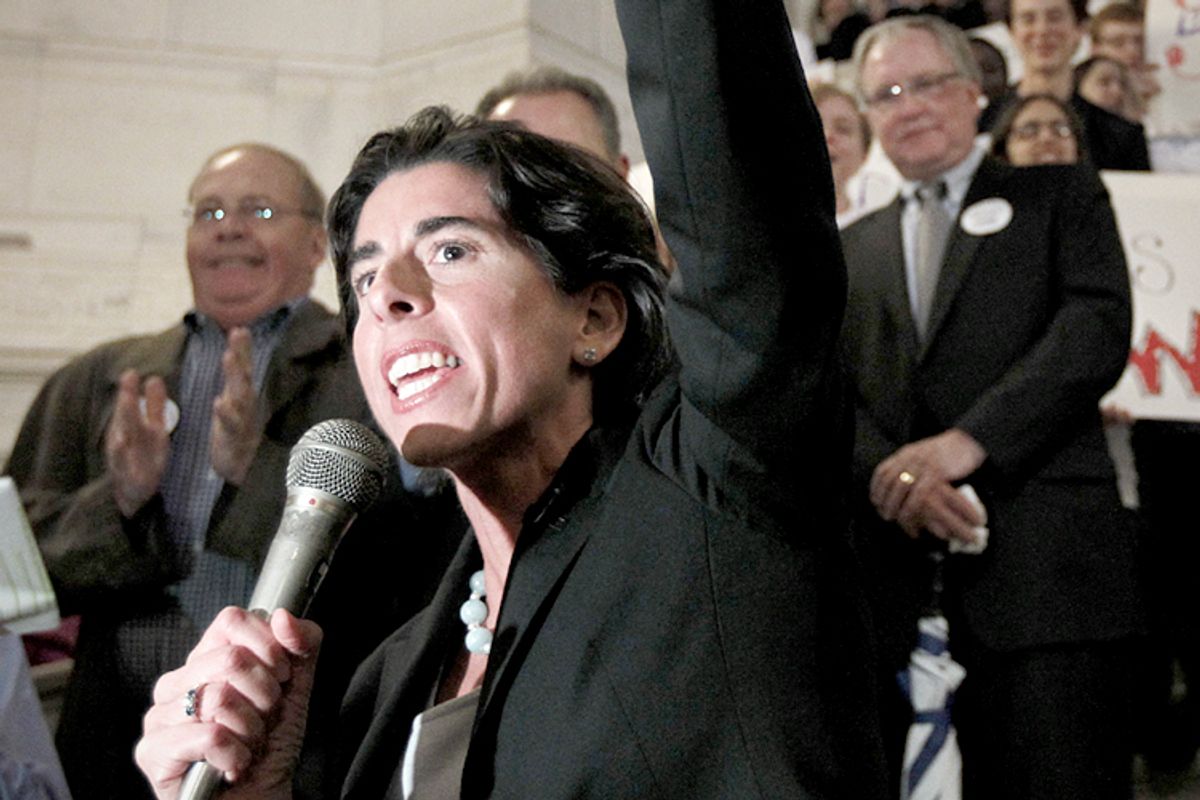 Less than a year ago, the Wall Street Journal alerted its national readership to what was happening in the tiny state of Rhode Island. In a story headlined "Small State Gets Big Pension Push," the paper noted that the state's "rollback of public-employee retirement benefits has turned (it) into a national battleground over pensions." With the help of billionaire former Enron trader John Arnold and his partnership with the Pew Charitable Trusts, conservative ideologues and Wall Street profiteers who engineered Rhode Island's big pension cuts were looking to export those "reforms" to other states. Now, after two huge revelations in the last few days, we know more about what that means in practice -- we know the kind of corruption and damage the "reforms" mean for taxpayers and retirees, and we know what kind of new muscle is behind the effort to bring that corruption and destruction to other states.

The first set of revelations comes from a detailed forensic analysis of Rhode Island's pension system by Forbes columnist and former SEC investigator Edward Siedle. Commissioned by groups representing public pensioners in the Ocean State, the data-driven analysis ends up reading like a criminal indictment of the speculator-turned-State-Treasurer Gina Raimondo (D), who is now cheerily touted by the Wall Street wing of the Democratic Party as a rising star. Raimondo has received such billing from corporatist Democrats in no small part because of her role in helping turn her state's pension fund into a private profit center. Indeed, in 2012, this Wall Street-funded Democrat joined with Arnold to champion specific pension reforms that simultaneously slash guaranteed retirement income and give a disproportionate amount of retiree money to the hedge fund industry, thus enriching Raimondo's old pals in the financial industry. According to Siedle's report, they also potentially enrich Raimondo personally. Here are just some of his report's key findings:

Siedle's report is worth reading in its entirety to understand what your state legislators actually mean when they start throwing around the Orwellian phrase "pension reform" -- and thanks to the second piece of news this week, we know that state legislators everywhere will almost certainly be throwing that seemingly innocuous phrase around. That news came from the St. Louis Beacon, which reports that none other than the American Legislative Exchange Council has decided to make cutting pension benefits one of its top goals in the 2014 state legislative sessions. They will be pushing to replicate Raimondo's much-hyped "reforms" in legislatures throughout the country.

It is difficult to overstate the influence of ALEC in state policymaking. Bringing together the largest corporations, best-connected lobbyists, and most powerful state legislators, it calls the shots when it comes to state economic policymaking. So it is huge news that it is prioritizing the Plot Against Pensions -- and not surprisingly, its renewed involvement in the plot is connected to Enron John Arnold. That connection can be seen in the author of ALEC's new report urging state legislators to convert traditional defined-benefit pension plans into 401(k) style schemes and consequently reduce pensioners' guaranteed retirement benefits. It is written by none other than Utah state Sen. Dan Liljenquist (R), who was not only the failed Tea Party primary challenger against U.S. Sen. Orrin Hatch (R), but more important, a paid pension "reform" consultant for John Arnold's foundation.

Like Siedle's analysis, the ALEC report is worth perusing -- but for different reasons. While Siedle's report is all about indisputable data and numbers, ALEC's is all about a kind of misinformation so dishonest it's hard to believe even the most shameless propagandists could even think it, much less publish it. As just one example, notice the section of the ALEC report telling legislators to lie to public employees by telling them "that pension reform will increase take home pay and benefits" and then citing that claim as rationale to entitle pension-slashing legislation a “wage liberation act.” Of course, in almost every state that has experienced pension "reform," retirement benefits have been cut, giving a far different meaning to "wage liberation." Workers' wages haven't been liberated to make higher wages -- workers themselves have been liberated from their wages.

Why would ALEC involve itself in the effort to cut retirement benefits and replace cost-effective economically stimulative defined-benefit pensions with "alternative investments" and 401(k)-style systems? Part of it probably has to do with its connections to the financial industry which, as Rhode Island proves, sees huge profit potential in "reforms" that let them raid public pension funds and bilk them with private investment fees.

The other part, no doubt, is about protecting the corporate welfare on which many of ALEC's corporate members rely. By pushing to balance state budgets exclusively through cuts to pension benefits, ALEC helps create a budget discourse that solely blames public employees for state budget shortfalls, and thus leaves corporate subsidies off the chopping block. Ultimately, pension shortfalls become the boogeyman, even though the corporate subsidies that benefit ALEC members (but that often don't create jobs) are far larger than those pension gaps.

None of this should be particularly surprising; in a pay-to-play political system, where there is cash under the control of industry-bankrolled public officials, there will always be the potential for graft and corruption. And where there is the potential to use state legislation to institutionalize graft and corruption, there has always been ALEC. What's different here is scale. Public pension funds are collectively worth almost $3 trillion. Though that is supposed to be money to fulfill sacred retirement promises to public workers, a coalition of right-wing ideologues, billionaire political activists, Wall Street profiteers and bankrolled politicians sees that nest egg as a lucrative private profit center. If they are successful in hiding their rip-off schemes in the argot of "reform," they will have accomplished one of the biggest heists in American history.