The charges are in response to "worldwide pattern of criminal conduct," according to a U.S. Attorney 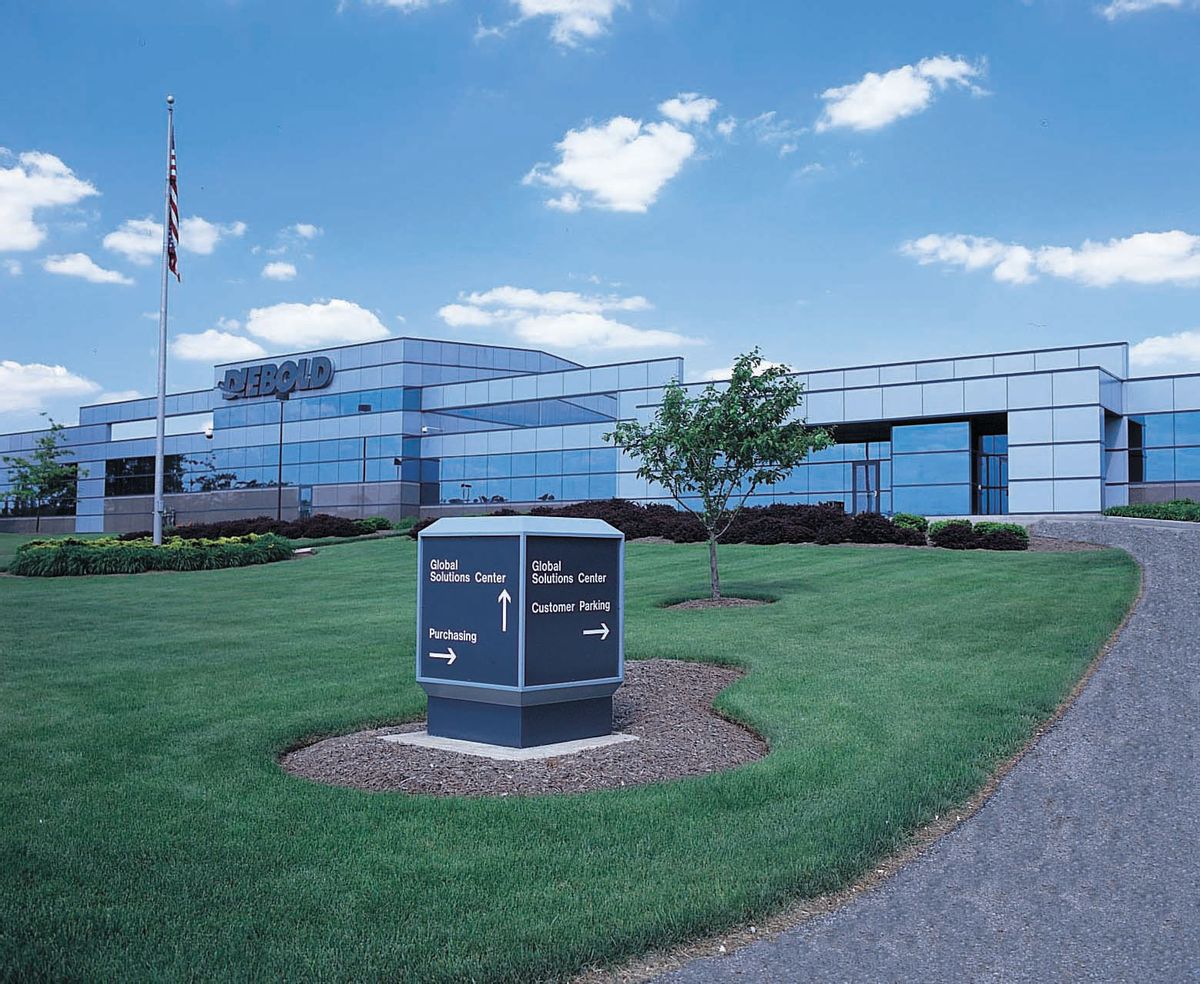 This article originally appeared on The Brad Blog.

One of the world's largest ATM manufacturers and, formerly, one of the largest manufacturers of electronic voting systems, has been indicted by federal prosecutors for bribery and falsification of documents.

The charges represent only the latest in a long series of criminal and/or unethical misconduct by Diebold, Inc. and their executives over the past decade.

According to Cleveland's Plain Dealer, a U.S. Attorney says the latest charges are in response to "a worldwide pattern of criminal conduct" by the company....

Federal prosecutors Tuesday filed charges against Diebold Inc., accusing the North Canton-based ATM and business machine manufacturer of bribing government officials and falsifying documents in China, Indonesia and Russia to obtain and retain contracts to provide ATMs to banks in those countries. The two-count criminal information and deferred prosecution agreement calls for Diebold to pay nearly $50 million in penalties: $23 million to the U.S. Securities and Exchange Commission, and $25 million to the Department of Justice.

The agreement with federal prosecutors also calls for the implementation of rigorous internal controls that includes a compliance monitor for at least 18 months. The government agreed to defer criminal prosecution for three years, and drop the charges if Diebold abides by the terms of the agreement.

Despite at least $1.75 million in bribes said to have been paid the company around the globe, nobody will go to jail for what U.S. Attorney Steven Dettelbach describes as their "worldwide pattern of criminal conduct," because they are a corporation --- and you are not.

The $50 million the company has agreed to pay is a mere fraction of the firm's $3billion in annual revenues. That, even though Diebold is a repeat offender --- which may be describing it mildly...

In 2010 the company settled an SEC fraud suit for $25 million. They also admitted in 2008 that they had overstated 2007 election division revenue by some 300% in hopes of manipulating stock prices.

As early as 2004, thanks to documents leaked by a whistleblower, it was discovered that Diebold had illegally used uncertified hardware and software in California election systems and planned to lie about it to state investigators. The e-voting systems, repeatedly found over the years to be easily hacked, were decertified for use by the state at the time (though they are still used widely around much of the country today.)

Still, nobody went to prison for any of Diebold's crimes.

Their most notorious infamy was tied to their often bumbling work as the nation's second largest e-voting company, which produced wildly insecure and ofteninaccurate voting systems and tabulators and which they proved willing to lie about. The Ohio-based firm first attracted the notice, and ire, of Democrats in 2003 when its then CEO, Walden O'Dell, penned a fundraising letter on behalf of George W. Bush and the Republican Party, promising that he was "committed to helping Ohio deliver its electoral votes to the president next year."

O'Dell, who many had blamed for Diebold's flagging stock prices and the sullying of the company's otherwise-excellent 150-year old reputation, was eventually forced to resign for "personal reasons" in late 2005. He was later required to pay back some $470,000 as part of the SEC's 2010 lawsuit after it had been found that Diebold had "manipulated the company's accounting to meet earnings forecasts from 2002 through 2007."

In 2007, Diebold, Inc., after nearly two years of attempting to sell off their elections division, renamed that portion of their business to Premier Election Solutions. Eventually, Premier, the second largest voting machine company in the country at the time, was sold to ES&S, the nation's largest. In turn, the U.S. Dept. of Justice forced ES&S to sell off many of the assets from the Diebold/Premier acquisition in response to anti-trust concerns. Those assets were eventually purchased by the Canadian firm, Dominion Voting which has since become the second largest voting machine company in the U.S. after their subsequent purchase of Sequoia Voting, a firm tied for years to the late Venezuelan President Hugo Chavez.

Diebold's Chief Financial Officer and Executive Vice President, Kevin Krakora,stepped down in 2009 amidst the SEC's investigation at the time. As The BRAD BLOG reported exclusively in 2007, Krakora had been the top beneficiary of an apparent round of insider trading by a number of Diebold executives who unloaded hundreds of thousands of dollars worth of company stock just before the announcement of the Diebold/Premier name change, and the subsequent plummeting of the parent company's stock price. In a mass sell-off, Krakora and other executives sold their shares at more than $53/share, a near-historic high, just prior to the price plunging more than 50% on the announcement of the elections division spin-off. Diebold, Inc.'s price has never recovered from the 2007 sell-off. It closed at less than $30/share on Wednesday.

The Plain Dealer reports that court documents filed this week by the U.S. Justice Department allege executive and company employees from Diebold's Asia Pacific region paid "$1.75 million in bribes, gifts and trips to dozens of employees of banks in China and Indonesia"...

The bribes were paid in order to secure and retain business with bank customers, including state-owned and state-controlled banks.Diebold attempted to disguise the payments and benefits in various ways, including by making payments through third parties designated by the banks, and by inaccurately recording leisure trips for bank employees as "training."

The court documents also accuse Diebold employees, over a four-year period, of creating and entering into false contracts with a distributor in Russia for services that the distributor was not performing. The distributor, in turn, used the Diebold funds to pay bribes to employees of Diebold's privately-owned bank customers in Russia in order to obtain and retain ATM-related contracts with those customers.

Despite their years-long global crime spree, it seems Diebold will receive yet another slap on the wrist, and another polite request to please not to do that again. You and I should be so lucky next time we run into repeated trouble with the law. Good luck with that.