In defense of my gray hair

My therapist told me not dyeing it was a sign of insecurity. But I've found it a source of strength 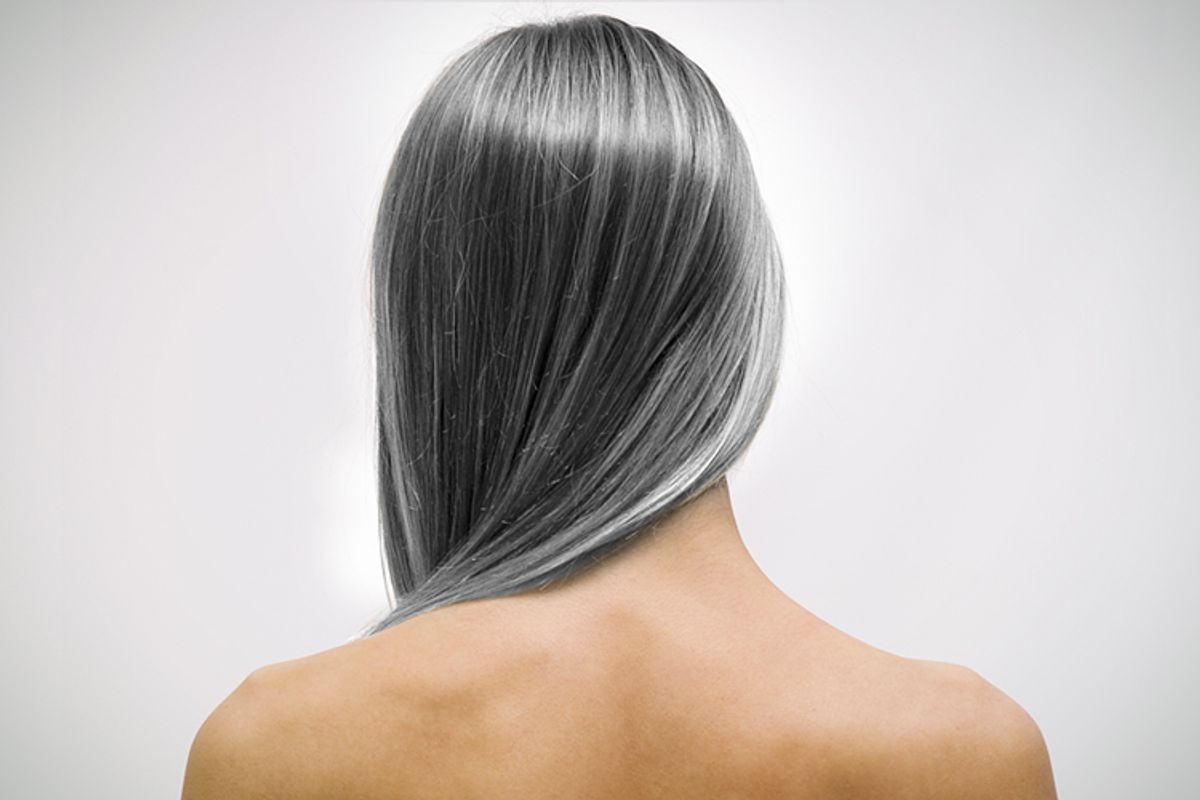 “You're insecure, that's why. Do you know what you'd look like as a redhead? You'd be a knockout!” my third therapist (the behaviorist) told me, trying to get me to lose the gray. She said it was all about my insecurities, that I didn't want to be competitive with other women, and that my salt and pepper hair announced to the world that I wasn't in the game. I considered her counsel in the intervening two weeks.

What game, I wondered? The love game? The sex game? The youth game? I really did like the part about knockout. She thought I was pretty!

Curious that she had selected red for me, when my native color had been dark brown. I was 40 then, having sprouted my first grays in my late 20s. The Freudian’s name, unbelievable but true, was Dr. Love. “What should we call you?” my husband and I asked, at our first session, where we’d come to save our marriage. “Dr. Love,” Dr. Love said. All my other therapists/marriage counselors, before or since, have been on a first-name basis: Doris, Ina, Florence, Richard, Elaine, etc.

But this was my fourth session with Love, and my first one without Andy. There were certain things that were good for the therapy, like not bringing in coffee. And Love had decided after our introductory couple’s sessions that it would be good for the therapy if henceforth Andy and I were to see her separately, each of us on a biweekly basis.

Now, just us girls, she could go where so many of my hairdressers had gone before her: “Why don’t you color your hair?”

She couldn’t see me shrug, since I was lying on her fainting couch looking up at a Matisse dancer print, and Love was sitting behind me in very low light. This arrangement was good for the therapy. “I don’t know,” I said. “A lot of reasons.  My mother never dyed hers, and she’d make fun of women who did. There were a lot of hair rules in my family.”

“Your mother had been too insecure to dye her hair. She didn’t want to compete with your father’s girlfriends, and look what happened to her.” Dad split is what happened. But could you say their divorce was only about Mom’s gray? What about her 13 pregnancies? What about her very difficult childhood, and Dad’s?  What about World War II and the Depression and the '60s Youthquake?

As it happens, Andy and I were experiencing our own private youthquake. We were just kids when we married, and now here we were, smack upside the 18-year itch. We both had acted out. It seemed I’d somehow gotten in the game even with my as-is hair, and been found out. My husband was bad, too, badder than me, and every bit as gray, though his gray was camouflaged, blending well with his native light brown, blue-eyed golden boy looks, and by his maleness. In fact, the man has never owned to being bad, or to a gray hair on his head. He says he’s just getting blonder with every passing year.

On the subway home, I thought how strange it was that my not dyeing was insecure, because I thought it was the opposite of insecure. Love was right, though, in a way. Part of the reason so little of my life has been lived under artificial coloring is that I'd be afraid to have people see I’d taken what seems to me to be an extreme, costly and inconvenient, sometimes scalp-searing measure to alter my looks.

Wouldn't it seem I was trying too hard? At my back I kept hearing Mom and my Irish aunts whispering: “Who does she think she is?” In fact, I did color a few times over the years, but never had the staying power to fight my roots.

“It’s a feminist choice,” I once observed to a friend, gray like me.

My friend disagreed: “I’m only doing it because I don’t want to be bothered. I just don’t want to spend the money or my time. I’d rather be doing something else.  Reading. A movie.”

So it may be that Dr. Love was only trying to help me; trying to drive home the point of hair dye and competition when, soon after, she proposed to my man, in one of his solos, that she lie with him on the fainting couch during their one-on-ones. Holding each other. (Yes, and he was as weirded out by the suggestion as I was.) The trust that would build between them would be good for the therapy, he said she said. She hadn’t made me the same offer. Hearing that wasn’t good for my therapy. He said he didn't lie with her and wasn't lying, and we quit soon after. Therapy, I mean.

I should mention that Love appeared to be at least a generation older, though her crowning glory was a jet-black helmet. Point being, covering gray only gets a person so far.

I am in my 60s now, and many of my contemporaries are still covering, and now even men. One of my dearest friends laughs at her dilemma: “My daughter asked if I’m going to still have black hair when I’m 80.”  In fact I’m perversely glad for their choice, because I’d rather not be out for drinks at a table that is homogenously hoary, afraid that we’ll be looked upon with disdain as early-bird diners. Whose disdain? The waiter’s? The kids at the next table? Mine? (Speaking of insecure.)

These days I exercise and try to eat well to stay fit forever. I’m into comfort, and wear heels and bras only for grand occasions, when I might also have my hair blown out. But for everyday I love sexy clothes, clingy knits, leggings, short skirts, big hoop earrings and makeup. I used to say graying, now I say gray, but the truth is white. As the driven snow. I used to say When I was younger. Now I say When I was young.

I am pretty still. As I walk along my city streets, I occasionally see other pretty, chic women d’une age certaine with au naturel, longish hair. A caveat here: Though one of Mom’s rules was no long hair after 30 (30!), one of mine is that if you go gray, give it some length, unless you feel up to working a short attitudinous moussed look. Eschew matronly short cuts or perms! As I pass another woman, who like me might also make the grade as a phase-one Eileen Fisher model, or maybe the attractive wife in an erectile dysfunction or retirement village ad, I find, invariably, that our eyes meet as though we’re acknowledging shared membership in a secret society. And, sometimes, I get second looks from men of various ages. In a time when so many men are dyeing, I think these guys see a silvery still-in-the-game dame as a kind of relief, like they could let their hair down, too, should they have any.

By the way, my marriage survived Love, and we’re going blondly into our dotage. I’d wanted to write a version of this essay a quarter of a century ago, but when I pitched it to women’s mags, the editors said no way, that Clairol and L’Oreal were big advertisers. I have, on several occasions, received this lovely compliment from women:  “I just love your hair! I’d go gray in a minute if mine looked like yours. Mine is so dull.” To which I reply: “How do you know?”

Kathleen Rockwell Lawrence is the author of two novels as well as a collection of her essays ("The Boys I Didn't Kiss"). She teaches at Baruch College.