The death of NC-17: A sex-obsessed rating system's slide into obsolescence

The most severe MPAA rating is getting ignored for a new French art film, another sign its relevance is on the wane 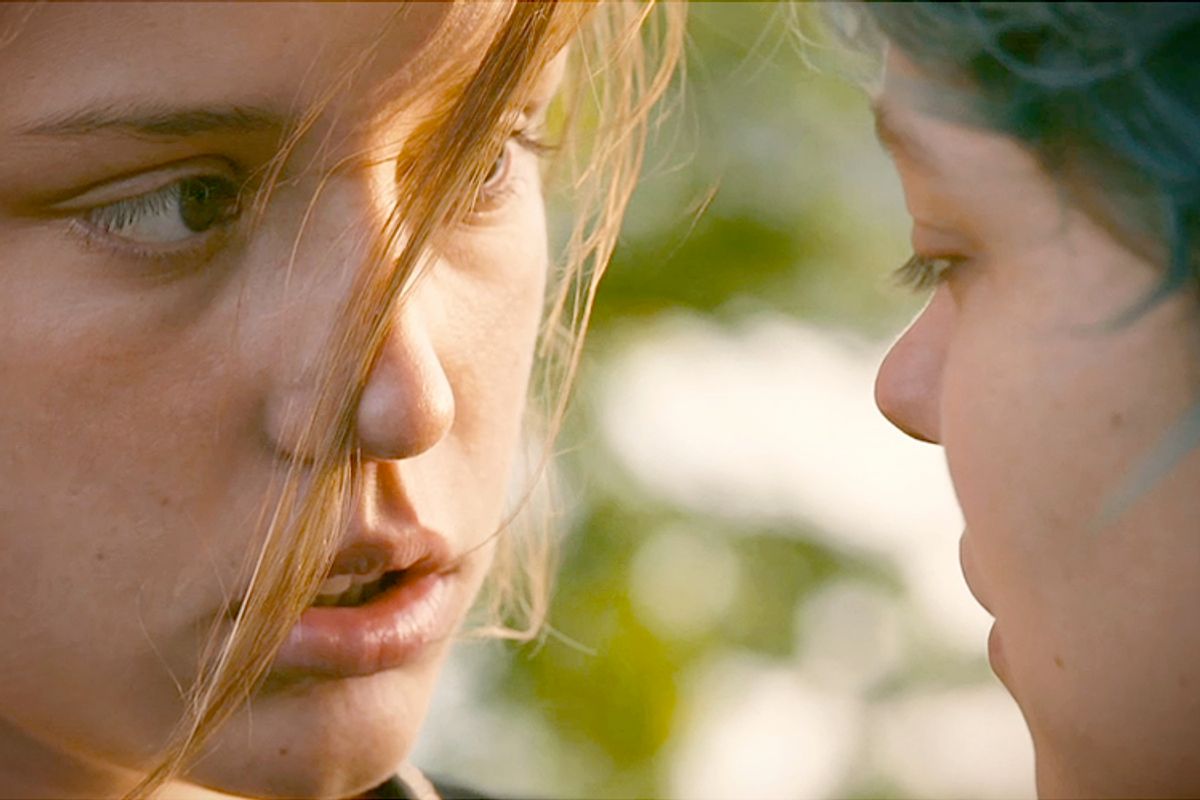 Adèle Exarchopoulos and Léa Seydoux in "Blue Is the Warmest Color"
--

This Friday, the NC-17 rating gets another nail in its coffin.

That's the day that the French critical sensation "Blue Is the Warmest Color" hits theaters. The film, which depicts, in explicit detail, a lesbian relationship, has already earned the Cannes Film Festival's Palme d'Or -- and the Motion Picture Association of America's severest possible rating. But one New York theater is ignoring the MPAA's recommendation; the IFC Center will admit patrons under 17.

As the New York Times points out, the MPAA's ratings (which go from G through NC-17), aren't actually actionable -- they're just guidelines for theater owners, albeit guidelines usually followed. Even an R rating -- denoting violent or sexual films an under-17-year-old may only see with an adult guardian -- can present financial challenges for a film being marketed at as broad an audience as possible.

But the sort of films that end up with NC-17 ratings aren't exactly seeking the approval of the "Transformers" audience. The NC-17 rating's recent history has been, alternately, a death knell or a way forward for challenging films. When the marriage-in-crisis  film "Blue Valentine" got slapped with the adults-only rating in 2010 for its graphic sex, the Weinstein Co. feared a loss of potential viewership and appealed the decision; facing pressure from Harvey Weinstein, the MPAA rescinded its decision. When "Shame," a sex-addiction parable, came out in 2011, on the other hand, Fox Searchlight embraced the rating. The company's president told the Hollywood Reporter: "I think NC-17 is a badge of honor, not a scarlet letter. We believe it is time for the rating to become usable in a serious manner."

Indeed, the entire reason for the NC-17 rating's existence is because the old "X" rating was so strongly associated with pornography, a genre that's receded from theaters; NC-17 was developed in 1990 to denote films like "Henry & June," the Anais Nin adaptation.

The NC-17 rating's creation to distinguish films from pornography is revelatory; "Shame," "Blue Valentine" and "Blue Is the Warmest Color," the three highest-profile films to have received the NC-17 rating in recent years, all are explicit in sexual and not violent terms. It's a common critique of the MPAA, but no less true: the panel is most draconian when it comes to human sex acts, while allowing truly gory violence to get by with an R. "Shame," a film about adult relationships, fundamentally needed sex to convey its themes about a permutation of experiences all adults have. "Saw" (which was edited down to get an R but which is still extreme) needs violence to gross you out.

Given that "Shame" used its NC-17 rating to get more cachet than it otherwise might have and that "Blue Is the Warmest Color" seems to be catalyzing at least some resistance, is there a way forward for NC-17? The late Roger Ebert had proposed a revamped ratings system, with "A" indicating films meant for adults and meant to indicate merely the intended audience, not to prescribe action on the part of theater owners.

Teens have had access to much harder stuff than the sex depicted in "Blue Is the Warmest Color" since they first got a computer in their bedroom. (Online porn doesn't require an MPAA rating.) The only effect of a restriction like the NC-17 is to stigmatize things that many people have seen -- but likely have never seen presented so artfully or within the context of a beautiful, humanist story. It reinforces the idea that sex is dehumanizing, best watched furtively online, rather than in the context of a relationship or life story. Seventeen-year-olds can handle some on-screen sexuality -- and they might just be enriched by art.