The GOP's new lie is designed to attack Obamacare and retroactively reassign blame for the shutdown. It won't work 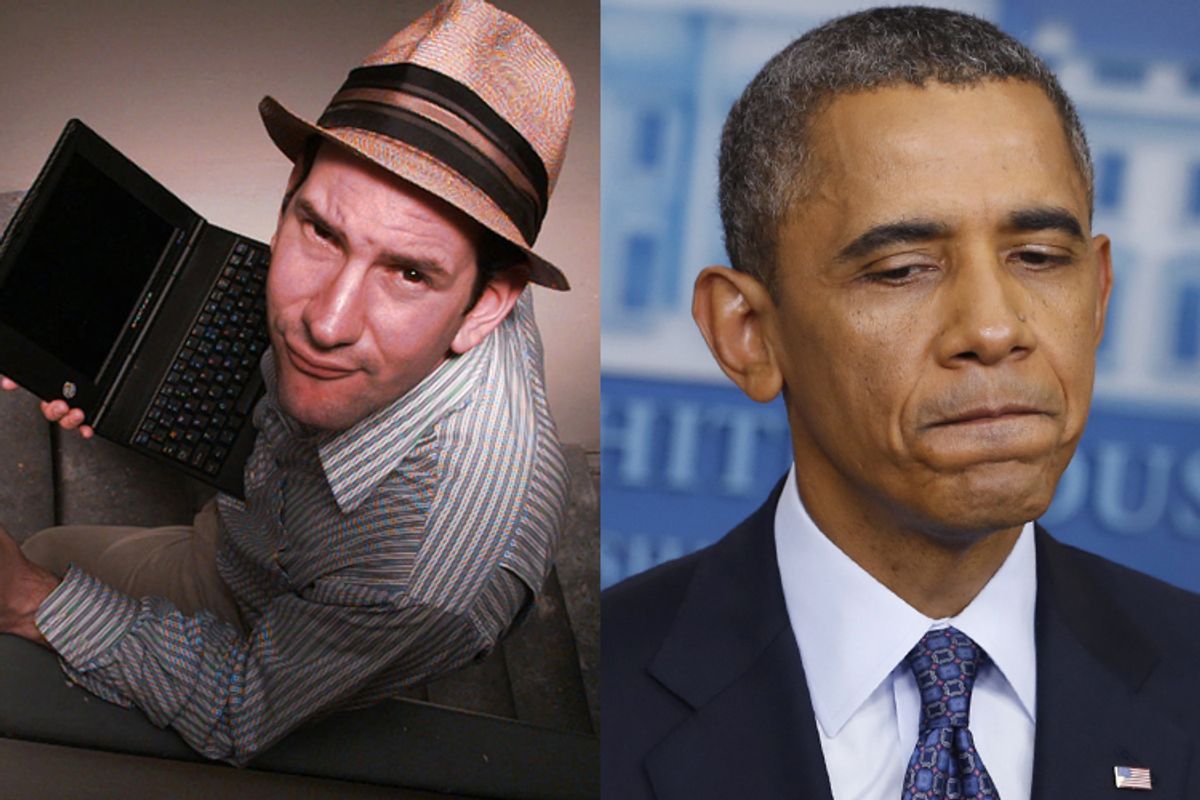 Beyond a basic misunderstanding of the Democrats' position in the shutdown and debt limit fights, one of the biggest reasons Republicans got themselves into so much trouble last month is that they badly misjudged both the party's commitment to the Affordable Care Act and its level of concern that the law is a real political liability.

Any day, they believed, the coalition would crumble under the weight of news headlines, badly spun public opinion polls or deadline-driven legislative pressure, and Democrats would agree to undermine the law in some crucial way.

But they were wrong. Just three and a half weeks ago, the GOP shut down the government in part because Democrats refused to delay the healthcare law's individual mandate as a ransom for passing a bipartisan appropriations measure.

In the interim, a few things have happened. First, Healthcare.gov launched. Second, it became clear that Healthcare.gov had some real problems (remember, the mandate demand predated the launch of the exchanges -- the pitch was all about parity between businesses and individuals). Third, the government reopened.

Now, with GOP hostage threats tucked away in abeyance, and Healthcare.gov's prognosis unclear, Democrats on Capitol Hill and in the Obama administration are entertaining a couple of ways to ameliorate the problems the site is creating for consumers in states with broken marketplaces, without harming the basic integrity of the law.

The coalition is hanging together against GOP sabotage efforts under the worst possible circumstances. And, as such, Republicans are resorting to what you could either call derp, or outright deceit -- your mileage may vary.

Republicans see this as their big chance to pour some sugar into the vat of lemon juice they've squeezed for themselves over the past few weeks. And it might have worked, but for the GOP's four-year-long fire hose of bad faith with respect to all matters of healthcare reform. Their efforts to sabotage the law have been so unconcealed that support for Obamacare actually increased during the shutdown -- tepid liberals came home despite the website's troubles. And now that Democrats are grappling with what to do if the federally facilitated marketplaces in 34 states don't become functional soon, Republicans want to retroactively reassign blame for the shutdown to them.

Here's a spoiler: Nobody's going to buy it.

This isn't a Boy Who Cried Wolf problem for the GOP, though. In that charming fable, the very thing the unsuspecting child protagonist had been lying about actually materialized and ate him to death. Republicans deserve no such sympathy. They're still lying.

The claim, depicted above, is that Democrats now support the exact same individual mandate delay Republicans were demanding in exchange for funding the government a month ago. If they thought it might be necessary, why'd they let the government shut down?!

Well, for starters, kind of a lot's happened since then! On top of that, Democrats weren't just opposed to the mandate delay on the merits, but also on the grounds that they weren't going to concede anything unreciprocated to GOP hostage takers.

But the more important point is that Democrats still don't support a mandate delay.

Let's start with the Drudge Report. Drudge linked to an erroneously headlined MarketWatch story about the Obama administration's efforts to prevent people who purchase insurance from being penalized because they didn't apply early enough for their coverage to kick in before the tax deadline. That, in effect, would allow people to make use of the entire open enrollment period, and would give the administration about six weeks of breathing room if Healthcare.gov ends up taking months to fix. But it wouldn't change the date at which people become subject to the penalty.

After a brief but intense period of confusion MarketWatch changed its headline.

America Rising, by contrast, isn't bothering with the details of actual policy. The group is targeting vulnerable Dems who support the idea (first articulated by Sen. Jeanne Shaheen, D-N.H.) of extending the open enrollment period even further, if problems with the federal exchange persist, and just pretending that this is the same thing as delaying the individual mandate for a year.

The administration has suggested that it will provide hardship exemptions from the mandate for anyone who's prevented from purchasing insurance for technological reasons. Combine that with an extension of the open enrollment period, and what Dems are really considering is a plan to give the administration as much time as it needs to get Healthcare.gov up and running, without disrupting marketplaces in states that built their own exchanges.

The GOP plan, by contrast, is to use Healthcare.gov's problems as a pretext for undermining the entire law, even in states where people are signing up by the thousands. And the goal now is to obscure the enormous differences between the two in order to fuse an attack on Obamacare with a post hoc effort to slither away from responsibility for the shutdown.

None of this is great for Obamacare. But for Democrats, it's at worst an embarrassing admission that the federally facilitated exchanges are broken and might not be fixed quickly. If Republicans were willing to just leave it at that, they could have put the issue to real political use. Instead they're resorting to the same kind of outrageous, self-discrediting overreach that has defined every chapter of their campaign against Obamacare.