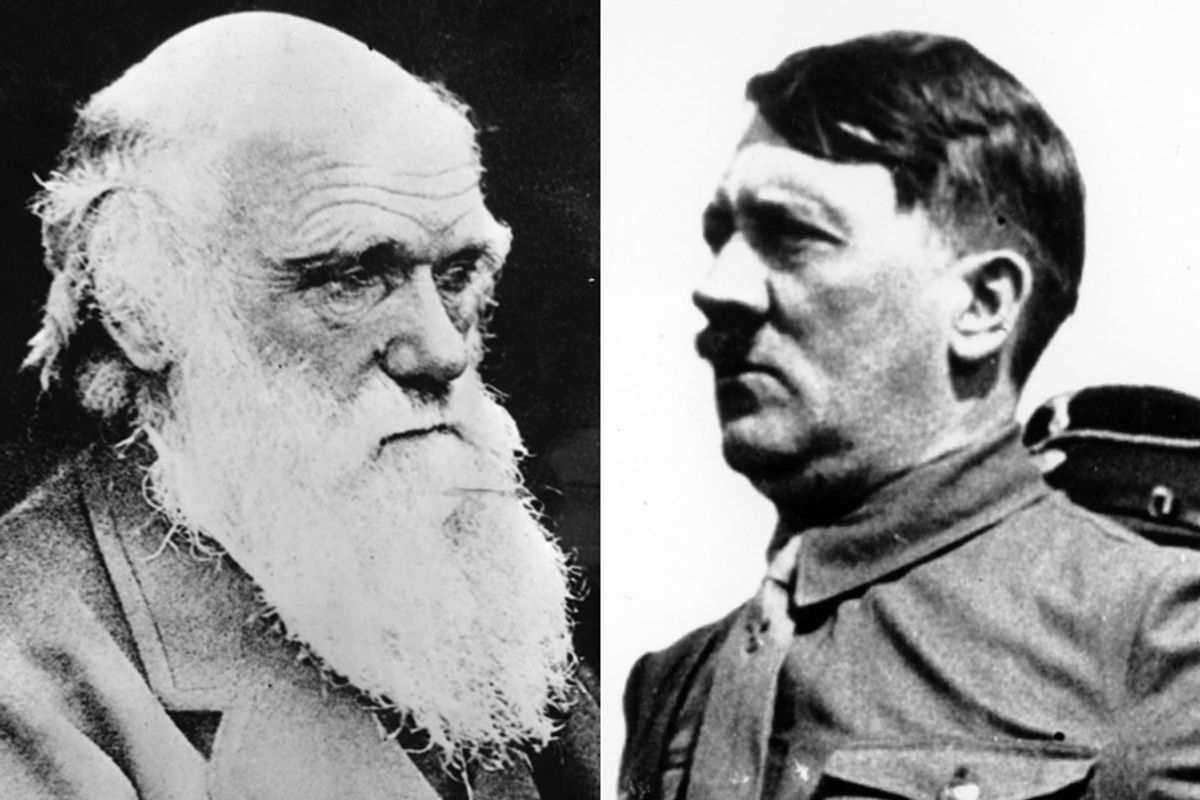 When Joshua Bass, an engineer, sent his son to iSchool High, a Houston charter school, he was expecting a solid college preparation, including the chance to study some college courses before leaving high school. Instead, the Basses were shocked when their son came home from the taxpayer-funded school with apparently religiously motivated anti-science books.

One of these books blamed Darwin’s theory of evolution for the Holocaust:

[Hitler] has written that the Aryan (German) race would be the leader in all human progress. To accomplish that goal, all “lower races” should either be enslaved or eliminated. Apparently the theory of evolution and its “survival of the fittest” philosophy had taken root in Hitler’s warped mind.

For Joshua, attacks on science in the classroom were unacceptable. Joshua began to research ResponsiveEd, the curriculum used at iSchool High. It emerged that ResponsiveEd was founded by Donald R. Howard, former owner of ACE (Accelerated Christian Education). ACE is a fundamentalist curriculum that teaches young-Earth creationism as fact. Last year it hit headlines because one of its high school science books taught that the Loch Ness Monster was real, and that this was evidence against evolution.

After Howard left ACE in the 1990s, he founded Eagle Project charter schools, which became Responsive Education Solutions, or ResponsiveEd, in 2007. ACE’s selling point was that it integrated Bible lessons into every academic subject. ResponsiveEd planned to do the same, but without the explicitly religious basis. Howard told the Wall Street Journal in 1998: “Take the Ten Commandments ­– you can rework those as a success principle by rewording them. We will call it truth, we will call it principles, we will call it values. We will not call it religion.” But in Joshua Bass' mind, at iSchool High, his son was taught religion in class.

ResponsiveEd says it has 60 schools in Texas, with an extended charter to open 20 more by 2014. It also has facilities in Arkansas, and plans to open in Indiana. Amazingly, it isn’t the only charter school curriculum based on Accelerated Christian Education’s format.

Paradigm Accelerated Curriculum (PAC) was founded by former ACE vice president Ronald E. Johnson. Where ACE is an “individualized, accelerated” curriculum based on the “five laws of learning,” PAC is an “accelerated individualized” curriculum based on the “six principles of learning.” Like ACE and ResponsiveEd, it questions the theory of evolution and presents the “catastrophist theory” of Noah’s Ark as a credible rival explanation. Like ResponsiveEd, PAC teaches that the theory of evolution influenced Hitler to create the Third Reich. It also relies on the traditional creationist argument of "gaps” in the fossil record:

Darwinism claims that humans gradually and mysteriously evolved from non-living materials. Some critics humorously claim that evolution proposes a philosophy of “from goo to you by way of the zoo.” […]

In another chapter, the PAC science materials use examples in history where science has been wrong – geocentrism, phlogiston, an obsolete theory that attempted to explain burning processes, and ancient Egyptian superstitions (such as using fly excreta to treat tumors)  – to undermine the authority of science in general:

Many other historical blunders of science could be mentioned. What we need to keep in mind is that scientists are human beings. The assumption that they are completely objective, error-free, impartial, “cold machines” dressed in white coats is, of course, absurd. Like everyone else, scientists are influenced by prejudice and preconceived ideas. You should also remember that just because most people believe a particular thing does not necessarily make it true.

This passage has a striking resemblance to John Hudson Tiner’s “When Science Fails,” an Accelerated Christian Education literature book that uses just such examples to undermine science and cast doubt on the theory of evolution.

ResponsiveEd's teaching on evolution promises that students will, among other things:

To explain: Microevolution and macroevolution are frequently used as a false dichotomy by creationists, who say they accept the former and reject the latter. Biologists say that the two terms refer to identical processes over different time scales, so there is fundamentally no difference. The references to “theories” of origins of life and of human development implies that rival theories will be discussed. Since mainstream science has no rival to evolution, this is presumably a reference to creationism or intelligent design.

The connection to ACE gave Joshua Bass further cause for concern. Much of the criticism of ACE over the years has been for its educational techniques as much as for its doctrinal emphasis. Harry Brighouse, professor of philosophy and affiliate professor of educational policy studies at University of Wisconsin, Madison, called it “a crude curriculum ... very much based on rote learning,” and described ACE’s social studies as “a kind of Christian version of the Stalinist approach to history but without the intellectual subtlety.”

David Prideaux and Cathy Speck of Flinders University, Australia, said ACE students were “in a situation of conceptual and cognitive disadvantage.”  The harshest criticism came from a 1987 article in the Phi Delta Kappan that stated:

If parents want their children to obtain a very limited and sometimes inaccurate view of the world – one that ignores thinking above the level of rote recall – then the ACE materials do the job very well. The world of the ACE materials is quite a different one from that of scholarship and critical thinking.

The criticism did not only come from secular sources. Educators at the fundamentalist Bob Jones University also criticized ACE’s academics, says historian Adam Laats, “According to BJU writers, the ACE and A Beka curricula failed to adequately educate their students academically or spiritually by neglecting ... higher-order thinking skills.”

For Joshua Bass, the decision was simple: he removed his son from iSchool High after just four weeks. For citizens in Texas, however, the concern remains that public funds are being channeled to schools that teach religiously motivated lessons.