Crowdsource your salary! An economy built on love

The gift economy gets monetized. Gittip wants to crowd-fund your salary -- and everyone else's, too 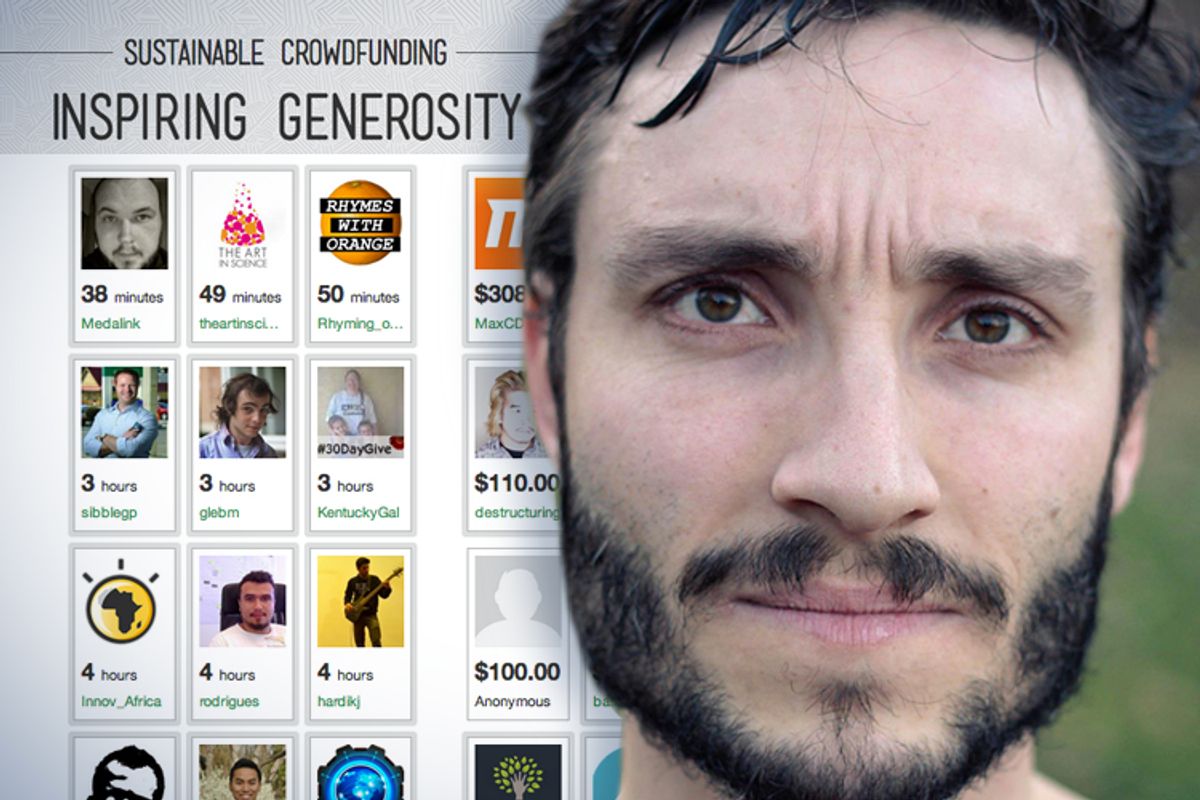 Two years ago, Chad Whitacre faced an existential crisis. He had a perfectly satisfactory job as a software developer for the online opinion company YouGov. The work was lucrative and the hours were reasonable.

And yet, he was unhappy. Something was broken. He was dissatisfied. Even worse, he was questioning his own dissatisfaction. "It was terrible," he tells me. "What the heck right did I have to complain as an upper-middle-class white male in a fantastic job, chock-full of privilege? There was such cognitive dissonance -- I am the luckiest guy on earth but I hate my life."

At the time, during the winter of 2011-12, Whitacre was also involved in the Occupy movement in nearby Pittsburgh. The ferment of protesting economic injustice reinforced his sense that something was wrong.

"The world I want to live in is of equals freely collaborating," he says. And that just wasn't happening in the 9-to-5 paradigm.

So, like so many hackers before him, Whitacre jumped off the corporate track to "scratch his own itch." He created Gittip, a tool for crowd-funding salary support for independent workers.

Gittip falls into the same general category as other crowd-funding companies like Kickstarter and IndieGogo and Kiva and Watsi, but there are some crucial differences.

First, the practical goal is to create regular streams of funding for individual participants, instead of gathering a lump sum of money for a particular project. Gittip "patrons" commit to donating a set amount of funds every week to a specific person or team.

Second, Gittip itself runs on Gittip. Whitacre and everyone else on the team that is building Gittip are compensated for their labor solely by donations delivered via Gittip. This is an extreme example of what is known, in the tech sector, as "eating your own dog food."

Gittip is a bold experiment in creating a financial infrastructure that will support people who want to do their own thing -- Gittip employees included. The money involved is not huge. Gittip isn't technically a nonprofit, but Whitacre makes it very clear that profit is not the goal. Venture capitalists and angel investors need not apply. Whitacre says his vision is to serve the world, not shareholders.

To a cynic, the whole thing sounds hopelessly idealistic and maybe even a little bit crazy. And the more you learn about how Gittip actually works in practice, the more odd certain aspects of it become. But philosophically, Gittip's mandate is rooted in the most ancient of Internet cultural traditions, the "gift economy" dream that great things can be built by freely cooperating communities of volunteers. Gittip, ultimately, is a fascinating stab at figuring out whether there is a way to make the gift economy permanently self-sustainable.

Since Gittip's inception, in July 2012, more than $188,000 has changed hands. The site is growing exponentially, says Whitacre, doubling twice over the last eight months. (You can see all the relevant data here.) In the week just ended, 1907 Gittip users exchanged $6,930.

Three hundred and thirty of those dollars went to a female programmer named Ashe Dryden, whose current passion is "doing diversity advocacy and education in the tech sector."

Such work is typically not well compensated. Gittip, says Dryden, has given her precious flexibility.

"Because so much of my time was being dedicated to this free labor, I wasn't able to set aside enough time for contracting, which is what I do for a living," says Dryden. "I saw more value in the diversity work I was doing and very few other people were doing it. I signed up for Gittip and let people know that if they found value in my work and wanted to support it, that I was accepting donations through there. Thanks to the visibility of my work and a lot of very supportive colleagues, especially more recently, I am earning a fair amount through it.

"Gittip is currently my main source of income. I currently make $330 a week, which is automatically deposited into my checking account every Friday. This allows me to continue my work while still looking for more stable, long-term sources of income that support the work I do to increase diversity and inclusion across the industry. Additionally, it is a good means of feedback for how visible and effective my work is and to potential clients and employers about the support I receive in the industry.

"I'd love to be fully supported by the community and not need to have an employer at all. This allows me to do what's best for the community as a whole -- to say things that need to be said without worrying about the politics or stakeholders of an organization."

When you review the ranks of Gittip participants, Dryden is an exception. By far the majority of patrons and recipients are male programmers, mostly working directly on open source software projects. For some comapnies that rely heavily on open source tools, Gittip is a handy new way to subsidize and support the labor of non-employees. At the free-education provider Khan Academy, developer John Resig helped set up a program in which Khan employees are given $5 in each paycheck to distribute to the developer of their choice, via Gittip.

Resig is skeptical that the model will ever be able to compensate developers as well as a full-time staff job, but he believes the flow of funds can still make a significant difference.

"The thing that excites me the most about the Gittip model is that it decouples the reception of donations from the creation of specific works," says Resig. "For example, in the Kickstarter model you're asking for money to build a specific thing and raise money with the expectation that it be built and there be some return. Whereas with Gittip you are entrusting the developer to continue doing what they have been doing: Building great software, tools, projects and documentation for others to use, freely."

I first heard about Gittip via a post by Rodrigo Davies, an expert in civic crowd-funding at MIT. I immediately reached out to Whitacre, seeking an interview.

He responded in minutes, but with a twist. Whitacre told me he had a policy of only talking to journalists who agreed to live-stream the video of their interviews with him for public consumption. He explained his request as stemming from his commitment to operate Gittip as an "open company."

I cannot begin to count the number of times I've heard Silicon Valley start-up guys gush about "openness" and "transparency." It's a new economy fetish, and adherence to the buzzwords is generally never allowed to get in the way of generating as much profit as possible. It's also generally a one-way street. Facebook, for example, knows a lot about us, but we don't know that much about Facebook. Transparency for whom, again?

Whitacre, I soon learned, means every word. Gittip is an open book. Nearly everything about the company, from the bills it pays to the compensation the Gittip team receives to the internal debates on how the company should move forward, is fully public. In fact, I soon discovered that immediately after Whitacre responded to my initial email, he tweeted to his followers the news of my interview request along with his demand that the interview be open. It seems that in the past, some journalists hadn't responded too warmly to Whitacre's rules.

Open journalism! You can judge for yourself from the hour-long conversation we had, but as far as I'm concerned, in 20 years of reporting, I don't think I've ever met anyone quite so committed to real transparency.

For example: Ten minutes into our Google Hangout interview, I'm looking at a spreadsheet of the weekly salaries of Gittip developers. Whitacre is describing the most unusual compensation system I've ever heard of. Every week, a few hundred dollars arrive in the main Gittip account, earmarked for the operation of Gittip. Gittip's employees then choose for themselves how much they deserve to be paid.

"If the developers take less than they feel they deserve they'll be resentful of their co-workers," explains Whitacre. "But if they take more, they'll feel guilty."

The only answer is to find that perfect medium of contentment!

On the spreadsheet, I see 70 or so contributors have chosen amounts ranging anywhere from just a few pennies all the way up to $42 -- Whitacre's take. (Whitacre makes an additional $400 or so per week from donations made directly to him.)

"The dollar amounts here are a collective representation of everybody's resentment and guilt," says Whitacre, with a twinkle in his eye. "Isn't that fun?"

I have to be honest. It sounds weird and completely impractical. I understand the appeal of a tool for crowd-funding salaries, but picking your own compensation strikes me as a recipe for trouble. All you have to do is read one flame war between software developers arguing over some utterly arcane point of coding propriety to feel a chill in your bones at the thought of just how angry an argument over voluntarily set salary levels might get.

But the underlying philosophy at work is consistent with Whitacre's overall practice. He doesn't want to be a boss, he says. He hates "coercion." He wants everybody to be their own boss, even insofar as that extends to the "employees" of the company he founded. Keeping everything public and engaging in constant conversation, he hopes, will work out the kinks.

The relatively small sums at stake, at least so far, may ease the tension. Whitacre acknowledges it is unlikely that anyone will make as much money via Gittip as they might at a standard corporation. His own example is instructive. He says he's currently earning just a fifth of what he made working at his last job.

And that makes all the difference.

"Companies pay a premium for our independence," he muses. Perhaps in the future, he says, the difference between your Gittip salary and what you could have earned in the corporate world will represent the true market value of independence.

When the open source software development model started gaining steam in the late 1990s, a great many pixels were spilled trying to figure out how exactly the "gift economy" worked. Why were so many hackers voluntarily building tools that they were willing and eager to give away for free? How did market economics explain free software?

One popular theory held that programmers gained in reputation among their peers by giving away the fruit of their labor, just as the Native Americans in the Pacific Northwest supposedly gained in status from their elaborate potlatch gifts to their peers -- the original gift economy.

I observe to Whitacre that you could argue that Gittip has turned the gift economy on its head. Now, reputation is getting monetized. Gittip makes the gift economy an integral part of the market system. Where does this end?

So where's the top, I wonder? What's the ultimate dream?

"The big vision is a world in which the economy is characterized by collaboration and trust and optimism and hope and freedom and sharing and love," he says.

He doesn't know exactly how Gittip is going to get there. The future is a mystery and he makes no promises or predictions. For the moment, he must stay focused on the job at hand.

"Gittip," says Whitacre, "is a precious little fire, a tiny spark, that I want to fan and grow."

That cushy corporate job he left behind, even with the responsibilities of a mortgage, a marriage and four children?

"I can't imagine going back."