Steve Ballmer is still running a cash machine, but the monopoly of the future belongs to Jeff Bezos 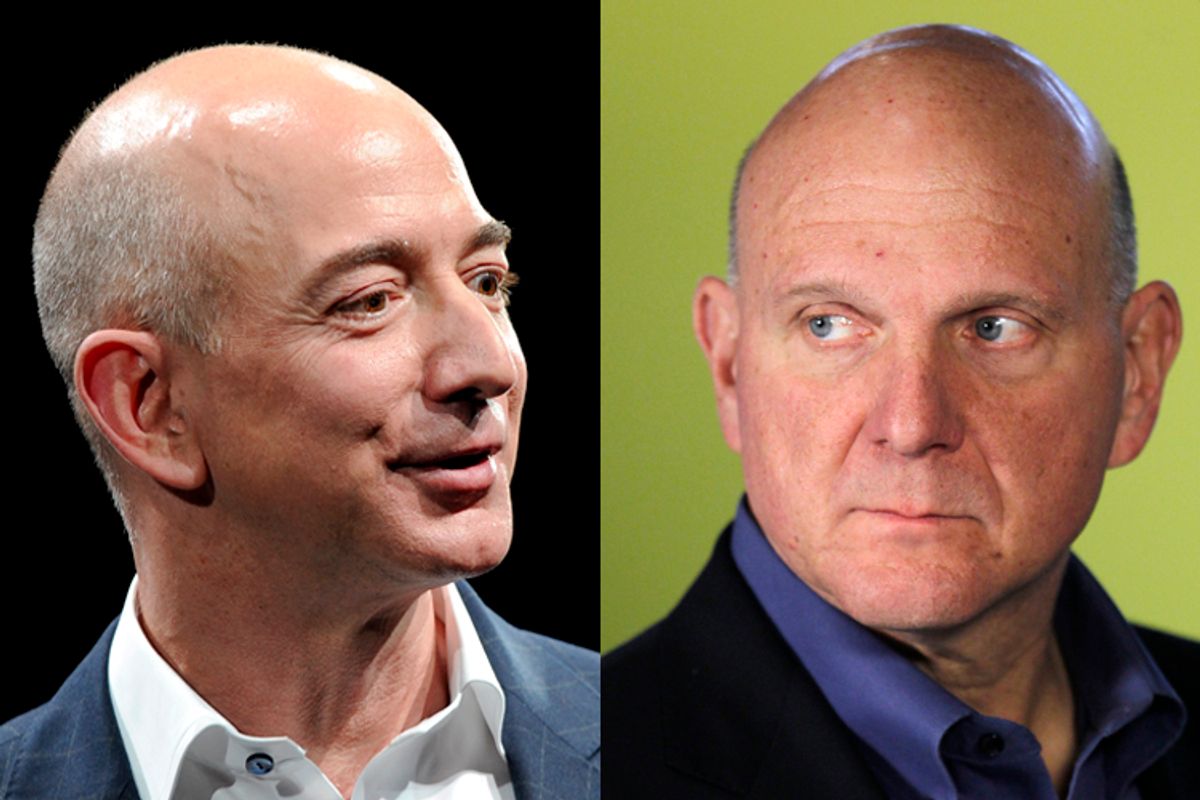 Here's a fun fact. Over the past five quarters, Microsoft has earned a cumulative total of $25 billion in profit. Over the same period, Amazon has lost $215 million.

The raw numbers would seem to indicate that Microsoft is killing it while Amazon is floundering. But Wall Street disagrees: On Friday morning Microsoft's stock price hovered around $35 per share while Amazon rose to $357.

And if you've been scanning press headlines for the last year, you know that the Microsoft is generally treated like a dead man walking. The news that CEO Steve Ballmer was stepping down became a launching point for a million where-did-Microsoft-go-wrong stories.

Amazon, meanwhile, can do no wrong. Jeff Bezos, as reported in Brad Stone's new book on Amazon, "The Everything Store," is the new Bill Gates and Steve Jobs combined in one neat FedEx package, the most brilliant businessman of the 21st century.

How does this make any sense? How long can Amazon continue to lose money while enjoying the love and affection of Wall Street? Why does Microsoft get less love than roadkill?

My Salon colleague Josh Eidelson has one answer to this question, from economist Dean Baker: Basically, Wall Street is irrational.

Given Wall Street's track record over the last decade, that's certainly a possibility we can't rule out. But it's not the whole story. Another answer is discernible in something as simple as hiring count. In its earnings report Amazon announced that the company now employs 109,800 people, passing Microsoft's total headcount for the first time.

As NextWeb points out, Amazon is hiring like crazy. 12,800 new employees last quarter; 24,800 over the last year. And that's not all it is spending money on. Amazon is pouring money into expanding its global network of fulfillment warehouses, its Amazon Web Services cloud computing business and its Kindle ebook readers.

And robots, lots and lots of robots. The primary reason why Amazon isn't generating profits, even as its gross revenue rises steadily, is that Amazon is spending massively on the future. Jeff Bezos is betting that no other competitor will be able to match its infrastructure for delivering whatever you want -- whether constructed from atoms or bits -- faster and more conveniently than anyone else. It's an old school, de facto monopoly play.

Microsoft, in contrast, is generally seen as extracting profits from a de facto operating system/Office monopoly that no longer can claim hegemony, that is under sustained assault from Apple and Google.

Amazon's now been around for 19 years, and it is always worth wondering how long a company can keep spending on the future before people start to wonder about the now.

But that moment clearly hasn't arrived yet.