Fighting sexism with cross-stitch: The rise of misandry crafts

In response to the rampant misogyny of the Internet, feminists are putting "misandry" on shirts, hats and jewelry 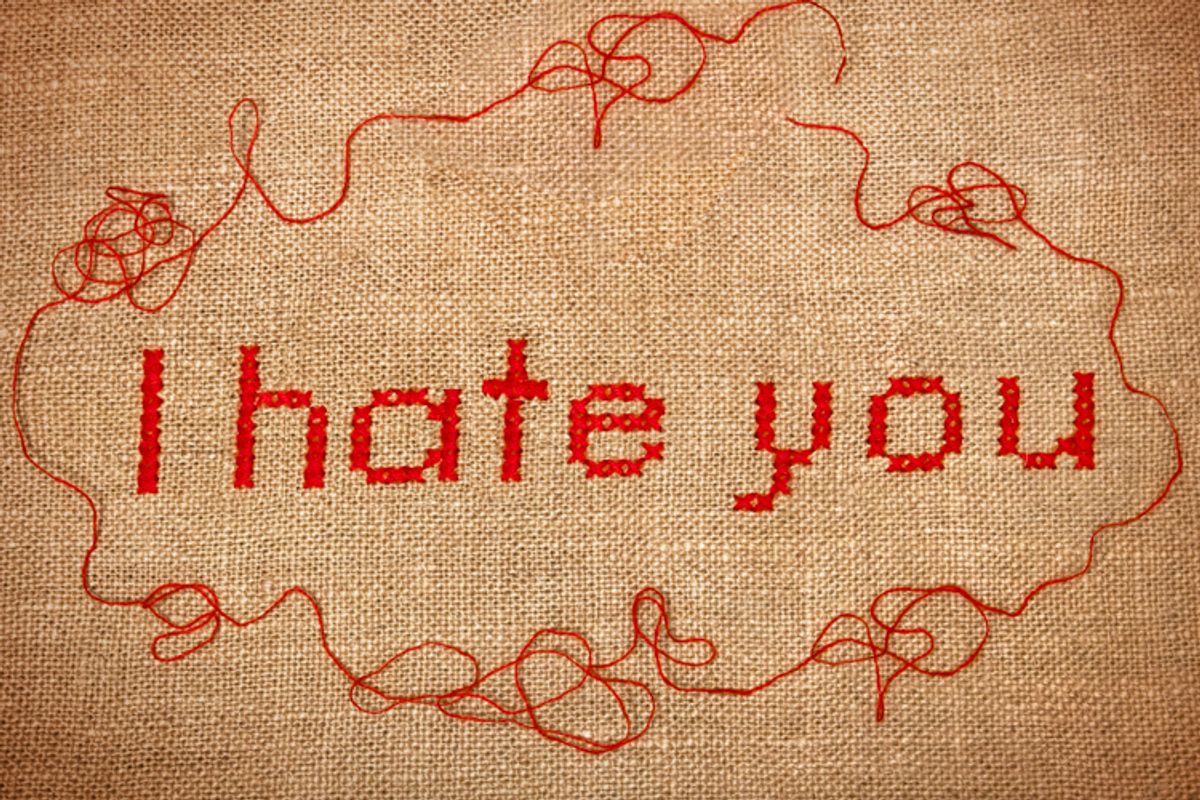 The word “cunt” has been in our lexicon for a while now, reclaimed by a host of feminist activists. I remember the first time I decreed myself a “cunt”—it was on the street following a performance of "The Vagina Monologues." My friend shushed me, but I called it out loud and proud. “I’m a cunt!” Until that point, I had only heard a man use that word. The experience was freeing.

Maybe, then, it should be no surprise that the word “misandry” has found itself a following in the pop-culture vernacular. (While misogyny is the hatred of women, misandry is the male equivalent. Or as Merriam-Webster bluntly puts it: “The hatred of men.”) Why misandry, and why now? The word is common in men's rights circles and appears to be the result of a backlash against increasingly public discussions of hate crimes against women and rampant Internet misogyny. This might sound like a sweeping statement—rampant Internet misogyny—but the truth is there is so much hate towards women on the Internet that it’s not about finding examples, it’s about narrowing down examples.

Go to Reddit or 4chan, or even YouTube. Go to Craigslist, read the comments on the CHVRCHES Facebook page, or look up the name Stella Creasy and you’ll find more of the same kind of verbal abuse, the same attacks, the same kind of threats. Men's rights activists tend to cry misandry whenever these problems are pointed out--and now women, proudly or in jest, are starting to use the term themselves. Even women who like men (I like my husband, my father, my brother and my son very much, for instance) can see why women might use the word misandry. Because maybe, outside of the Rampant Internet Misogyny, they have, at one point in their life, endured some abuse by a man. Maybe it was a dude, or a bunch of dudes, who treated a woman badly in her 20s. Or maybe, it was just the whole of men—you know, The Patriarchy.

Men understand this. This includes my husband, who, when I told him I was writing this story, said: “Yeah, men suck.” This doesn’t make him a self-hating man, this just makes him a man who understands the problems men can cause.

And because ladies, even the most riotous of ladies—after all, this generation’s interest in crafts started under the Riot Grrrl movement, where girls first embroidered “feminist” on pillows and formed knitting groups called “Stitch ’n Bitch”—like being girlish and tough, the misandry message has evolved in the form of arts and crafts. Check Etsy for the word misandry and you’ll find super-cute pom-pom knit hats with "misandry" emblazoned between rows of hearts. You’ll also find lavender and white heart-shaped misandry hair barrettes, a plastic misandry necklace and a misandry-adorned heart-shaped felt brooch with beads.

That’s not all. There’s artwork too, like this vintage photo of a woman gazing somewhere into the distance (maybe into the future of women’s suffrage?), encased in a sepia pink-hued heart.

Men who love to blame feminists for the end of men will, I’m sure, troll these Etsy sites until the end of time, whining along as they click, “Told ya so.” It’s one of the reasons misandry crafts are possibly a response to this sentiment: You think we hate you so much? Okay, you’re right. We’re wearing it on our sleeve now. Or around our neck. Or on our heads. Or as a pin.

But the truth is that feminists as a whole, despite what has been perpetuated, don’t hate men or wish for the torment of men. This doesn’t mean that male bashing doesn’t exist. It also doesn’t mean male bashing is somehow equivalent to female bashing. There is nothing equivalent to rape threats, sorry. And as Jezebel's Lindy West writes, “The most powerful proponent of misandry in modern internet discourse is [men] — specifically, your dogged insistence that misandry is a genuine, systemic, oppressive force on par with misogyny.”

Of course, there is a flip side. There are women who unapologetically hate men. Scrolling through Instagram the other day, I noticed an author whose work I admire wearing a misandry t-shirt. She suggested it should be a “staff uniform” for her magazine. When I asked her via email if the t-shirt was ironic, she wrote back saying, “To me, there's nothing ironic about misandry. I really do hate men. A lot.”

For most of the women who embrace the idea of misandry, though, it seems generally more complicated, or maybe just a play on words. One of the Etsy artists I spoke to said there was no other reason she created her misandry craft than because a “friend asked me to make her a custom one. After I posted a photo of it online, I started to get a lot of orders for them.” Even the Misandry-Mermaid Tumblr tagline states, “This feminist Tumblr strives towards intersectionality and inclusivity.” Yet this thoughtful and inclusive mission statement is written under a photo of a mermaid that reads, “Forever bathing in your male tears.”

The hardest part for me in accepting misandry is that it’s just not that simple. I have met and dealt with really, really shitty men in my life. But I have had really good guys who helped me through my divorce, who have lifted me out of dark places, and who have listened to me process some of the darkest fears about myself. Perhaps I need to buy misandry t-shirts for those men—that way they can reclaim the word without irony, and finally feel free.