The beloved book punishes Miss Trunchbull for acting like a man, and rewards the traditionally feminine Miss Honey 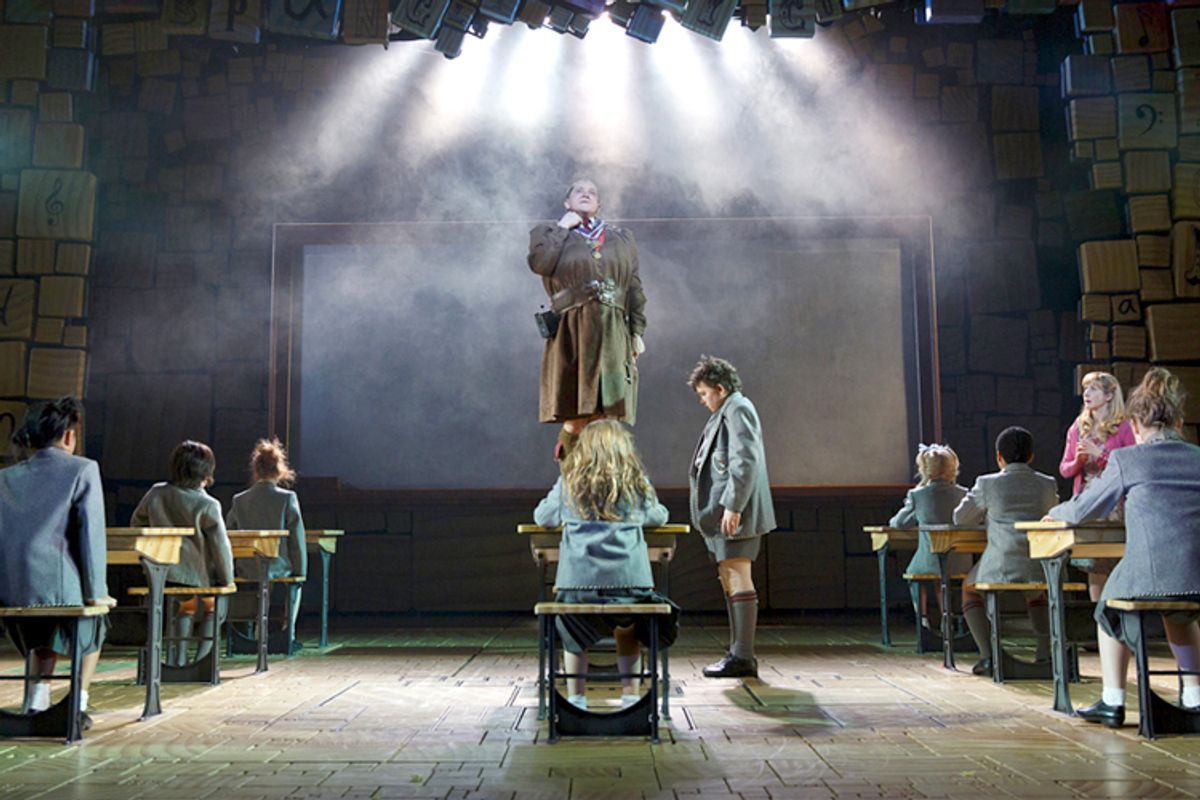 Bertie Carvel, center, during a performance of "Matilda, the Musical," in New York. (AP/Joan Marcus)
--

When casting began for "Matilda the Musical" two years ago, Director Matthew Warchus told the New York Times that he wanted a “psychological actor.” Bertie Carvel, the actor he eventually chose, wondered, "What does it feel like to wake up as Miss Trunchbull every day?"

Apparently, only a man would know. From Carvel on, only male actors have played the role.

To the naïve audience member, the casting might seem playful, silly, amusing, creative.

A queer audience would rightfully be more suspicious.

With this choice, Warchus is making literal the darkness at the heart of Roald Dahl's seemingly light-hearted children's tale. With a spoonful of sugar comes a transphobic message about the dangers of straying from traditional gender roles, a conservative parable about the "right" and the "wrong" kinds of women.

Dahl paints Miss Trunchbull as male inside and out. Her physique is "gigantic" and "formidable," with "big shoulders," "thick arms" and "powerful legs." She has a "deep and dangerous voice." Avoiding feminine dress, she wears breeches rather than a skirt, flats rather than heels, and in Warchus' play, a coach's whistle around her neck.

This athleticism is a further expression of Trunchbull's gender identity. We know her by last name only, like a boy on a sports team. Her sport, too, is gender “inappropriate.” Carvel told reporters that hammer-throwing is called "the ballet of the big man." The Olympics welcomed women to the sport seven years after "Matilda" hit shelves, but at the time of publishing, it had been open to men alone for 88 years.

Trunchbull’s masculinity is both the source of her insanity and the medium of her cruelty. She has a pathological hatred of femininity: "If there's one thing the Trunchbull can't stand, it's pigtails." She storms the halls as if playing football: "she ploughed right on through them like a tank, with small people bouncing off to her left and right." For punishment, she tosses children like little athletic hammers, eliciting cheers of "Well thrown, Sir!" And when Dahl forthrightly calls her evil, he uses masculine metaphor: "The Trunchbull is the Prince of Darkness, the Foul Serpent, the Fiery Dragon."

Her name in itself evokes masculine rage. "Trunch" (meaning small post) is a phallic reference and "bull" an emblem of unrestrained male aggression.

Dahl arranges the perfect foil for Trunchbull in Miss Honey. Honey is a paragon of femininity: demure, motherly, gentle, but most importantly, slender and beautiful “like a porcelain figure.” Throughout the book, her calm subordination and womanly weakness stand in stark contrast to the Trunchbull’s hot-headed masculine dominance: “Miss Honey stood there helpless before this great red-necked giant.” Honey not only exemplifies proper humility but also proper impotence; she is a damsel in distress. Trunchbull takes charge and charges forward; Honey appropriately waits for others to solve her problems.

The great irony of the tale is that it appears to empower. Matilda struggles to overcome her parents’ prejudices that “small girls should be seen and not heard” and that for women, “Looks is more important than books.” Matilda is defiant in the face of this gender predestination, and herein lies Dahl’s modest message of empowerment. Women should be “gutsy and adventurous,” even intellectual and literary. But they should still be women.

When they stray too far from the feminine path, they need to be put in their place. Ten-year-old Hortensia sprinkles “Skin-Scorcher” inside the principal’s gym shorts. When Trunchbull scratches her crotch, the child says she “realised exactly what was going on inside the Trunchbull's pants,” a double-entendre.

The greatest reckoning, however, comes when Trunchbull’s masculine façade is finally broken. Matilda fells her nemesis by reviving a “real” man (Honey’s father) to discipline her. He calls the Trunchbull by her female name Agatha, and this Kryptonite reveals the falseness of her manly charade. This creepy, cosmic gender justice deposes the Trunchbull and rewards the porcelain doll Honey, who never strayed from her femininity, even in the absence of masculine guidance.

"Matilda" is thus a fable about the hubris of being transgender. Women should know their limitations and never imitate a man’s authority or physical prowess, lest he intervene to remind them who’s boss.

Many may have missed these politics, seeing little more than a playful, imaginative, and entertaining story about a smart girl who gets even. This subtlety is Dahl’s genius. By pulling at the strings of our unconscious prejudices, Dahl conjures in the reader a hatred for the enemy that is greater than the sum of her misdeeds.

One group of people will not miss Dahl’s underlying message, however. Little girls who love sports and not dresses, who are tall or muscular, who are boyish or even perhaps identify as boys, who long someday to possess authority. All of these children will see themselves in the Trunchbull, and they will watch closely as these aspects with which they identify are shamed.

This is not the message we want to send our children.

Eliot Glenn is a freelance writer and cultural commentator, and an MPA candidate at Harvard’s Kennedy School of Government. Follow him on twitter: @eliotglenn.