"The Luminaries": A Gothic cathedral of plot 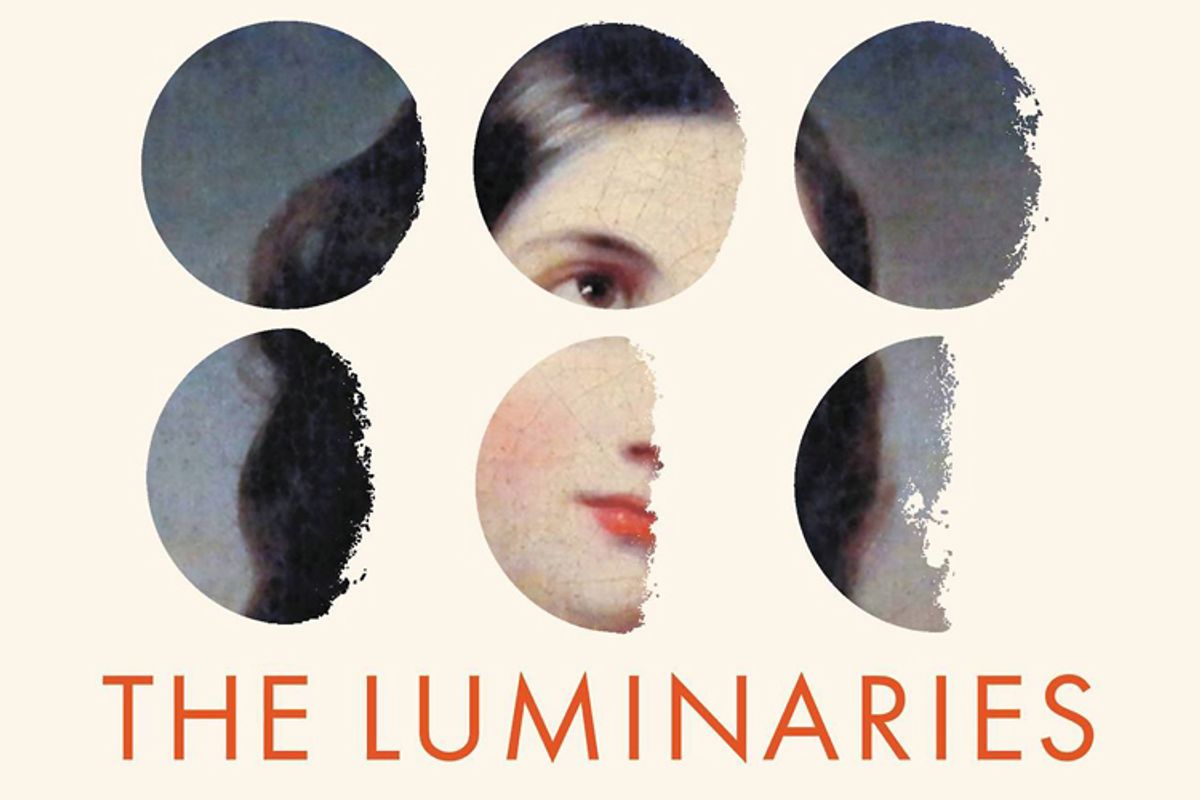 Eleanor Catton's hefty, Booker Prize-winning novel, "The Luminaries," begins with a young man named Walter Moody arriving in New Zealand during the island's gold rush of the 1860s, shaken by an undescribed "phantom" he witnessed aboard his ship just before it wrecked. He wanders into the smoking room of his hotel to find an unusual assortment of 12 men: Irish, English, Scottish, Maori, Chinese -- all of them weathered by the tough life of the frontier boomtown of Hokitika, and all of them behaving with a studied nonchalance. He's clearly interrupted a conference of some sort.

The boyishly handsome Moody has, as the novel's loftily third-person narrator informs us, "the manner of a discreet and quick-minded butler, and as consequence was often drawn into the confidence of the least voluble of men, or invited to broker relations between people he had only lately met." Despite their wariness, the assembled men soon explain that they've gathered to get to the bottom of a series of inexplicable and troubling events: the death of a prospector in a remote hut; the collapse of Anna Wetherall, a much-liked prostitute, in the main road from an apparently suicidal opium overdose; the discovery of a fortune in gold in two unlikely hiding places; the blackmailing of a rising politician; and the suspiciously hasty sale of a plot of land. Finally, there is the arrival in town of a lady claiming to be the late prospector's wife but also in some obscure way attached to a man named (perhaps) Francis Carver, a man who everyone in the smoking room agrees is a villain. We won't even return to Moody's shipboard phantom until all 12 men have had their say.

From the first five pages of "The Luminaries," it's evident that Catton's model is the Victorian "sensation novel," in which middle-class characters were suddenly confronted with alarming, inexplicable and uncanny events whose true causes and (usually scandalous) nature are gradually revealed in the course of the story. The best-known examples of these are "The Woman in White" and "The Moonstone" by Wilkie Collins, and it's safe to say that if you are one of Collins' avid modern-day fans, you'll be in clover with "The Luminaries." But if Collins' novels are rich in reversals and twists, Catton's is a veritable Gothic cathedral of plot, so complex and intricate that most readers will find themselves doubling back to make sure they've got it all straight. "The Luminaries" might have been written with the sole intention of disproving the canard that literary fiction is short on old-fashioned storytelling. There's enough plot here to fill four novels.

But that's not all. The underlying structure of "The Luminaries" is astronomically determined. Each of the novel's parts, which become systematically shorter as you go along, is preceded by a chart indicating which planet was in which of the 12 houses of the zodiac (corresponding to each of the 12 men in the smoking room) on the story's key dates. You could probably drive yourself crazy trying to decode all this on the first read-through, as some overmatched readers certainly seem to have done. There will surely be buffs who will devote themselves to mapping the elaborate system of astronomical correspondences shaping the novel, but that's not really required to enjoy it.

All you need to take from Catton's conceit is the idea that the story itself is driven not by individual characters and their wills but by the ever-changing relationships and combinations among them. You think you've got a handle on the nature of its mysteries, then the earth shifts on its axis, the perspective changes to reveal more hidden connections or influences, and you must think again. As the novel's narrator puts it, "there is no truth except truth in relation, and heavenly relation is composed of wheels in motion, tilting axes, turning dials; it is a clockwork orchestration that alters every minute, never repeating, never still."

Some critics have complained that the novel's characters are too "fixed" and that therefore "The Luminaries" doesn't engage the reader's heart. This is manifestly untrue, and probably a consequence of its association with astrological notions about the inherent natures of certain planets and signs (Venus is amorous, Mars is warlike, Saturn is ... saturnine). In truth, several of the characters -- particularly Anna, who evolves from an insecure, docile innocent into a woman who knows what she wants and aims to get it, and the Chinese immigrant laborer Ah Sook -- are moving and even heartbreaking. I suspect that some readers' feelings of emotional disconnection derive instead from the fact that there isn't a central character to latch onto. The story isn't "about" any one person. The literary convention of constellating the plot around a main character is so ingrained that a different organization can be unsettling. That doesn't make Catton's conception of Hokitika and how it works invalid -- just unfamiliar.

If I call "The Luminaries" postmodern, I'm sure to trigger a set of cranky, knee-jerk prejudices, as well as a more-thoughtful awareness that novels that are self-consciously about plot often lack the entertainment value of novels that actually have plots. But "The Luminaries" is an exception to that tendency. There will no doubt be readers who will nestle voluptuously into its 19th-century voice and think no more of larger matters, as Catton takes them careening through the exploits of gold smugglers, con men, spiritualists, whoremongers, conspiracists, killers and at least one holy fool. There are others who will treat "The Luminaries" like the fantastic puzzle it most certainly is. This is the rare novel that works beautifully on both levels, and that understands that each of these aspects is like a magnetic pole: The field between them is where all the power lies.