Actually, everyone is telling college women not to drink

Contrary to what Caitlin Flanagan and others argue, many universities are already warning women about alcohol 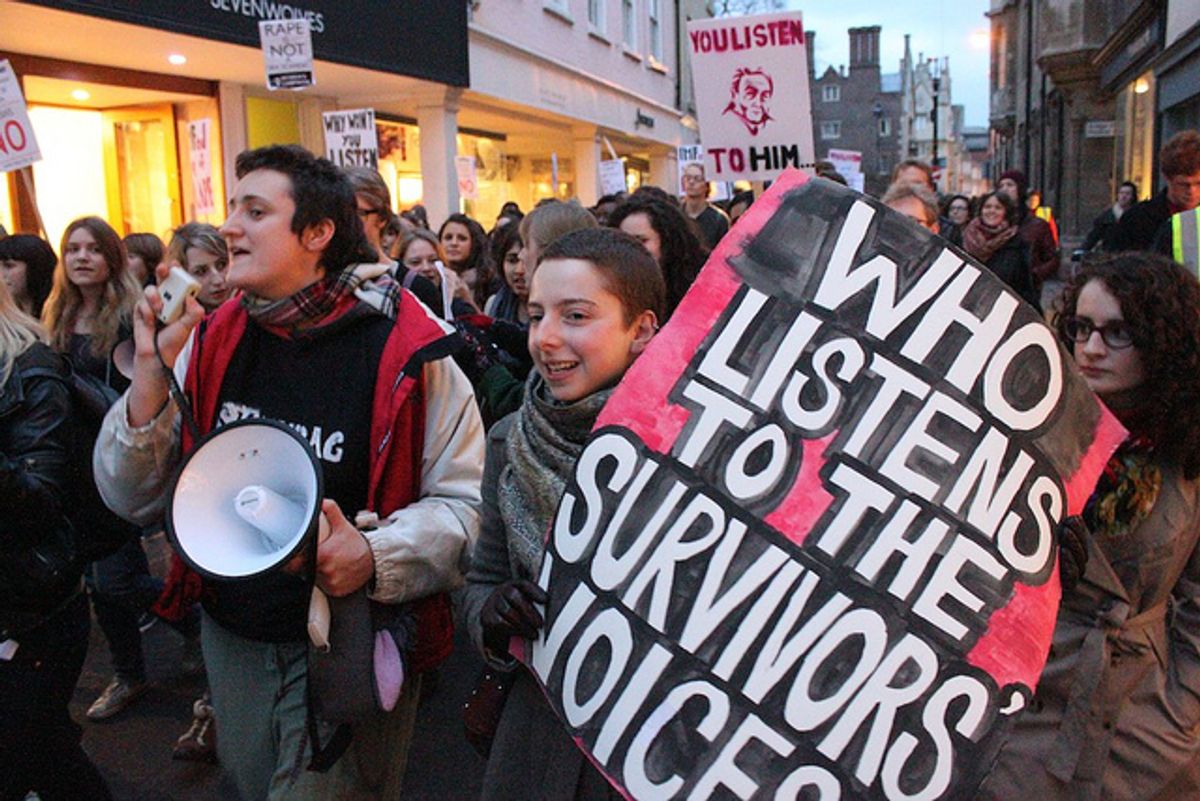 In a Monday opinion piece for the New York Daily News, Caitlin Flanagan repeated the oft-repeated (and repeated, and repeated, and repeated) idea that our culture is dangerously silent when it comes to policing young women's behavior. Specifically, Flanagan believes we are failing female college students -- who are "living away from home for the first time, excited to party and hook up, ill-informed by their fearful professors and advisors" -- by not telling them "exactly what they should do to lower their risk of assault."

Let's put a pin in Flanagan's assumption that women's perfect compliance with social expectations is somehow the secret to preventing sexual assault on campus (or anywhere), and instead move on to this: Why do we let writers like Flanagan get away with pretending that campus safety is not already something that parents and university officials are teaching young people?

"The louts who perpetrate these rapes on drunken female students are apparently unmotivated to change their behavior," Flanagan writes, "and the feminist power structure that controls the message regarding campus rape is unwilling to recommend that female students adopt safer behaviors."

But a quick sampling of safety guidelines from major American universities reveals that risk reduction -- the information that, according to Flanagan, no one is telling young women -- is actually a central part of campus policy ... pretty much everywhere.

And yet women are still being sexually assaulted because, of course, it's not about alcohol. As Salon's Soraya Chemaly recently noted, rape is not a product of women's drinking, but is fostered by a "repressive and normatively biased culture intent on conserving a destructive status quo. One that has been telling women to avoid rape, to no success, forever."

But writers like Flanagan (and much of society, frankly) choose to ignore the cultural context in which sexual assault is condoned and excused, preferring instead to saddle women with the sole responsibility (and yes, blame) for crimes committed against them.

It may be hard to convince Flanagan that she is wrong about sexual assault, drinking and "the feminist power structure," but calling her out when she promotes a false idea about what society will and won't tell young women about personal safety is certainly a step in the right direction.

High-risk drinking is the excessive consumption of alcohol that leads to serious negative consequences, not only for those who are drinking but for others around the person drinking. The negative consequences include academic failure, accidents, falls, fights, injuries, sexual assaults, vandalism, arrests and community disruption.

From the State University of New York Binghamton:

From orientation through the academic year we communicate with students about their personal safety and the importance of looking out for one another. We'd like to remind all students to exercise good judgment and sound safety sense off-campus. If at all possible, don't walk alone at night. Go out and return with friends. Use the OCCT and BCT bus systems. Keep a cell phone on you and have emergency numbers programmed in. Report all suspicious activity and persons to police Call 911 from your cell phone if you feel threatened or spot suspicious persons of activity. Help your friends make good decisions and remember that alcohol impairs judgment and your ability to recognize dangerous situations.

There is no perfect way to protect yourself [from sexual assault], but there are simple things you can do to minimize your risk.

From the University of California Berkeley:

Although often viewed as a “social lubricant,” alcohol, if misused, can endanger your well-being, and have serious legal, health, and academic consequences. Use of alcohol can increase the risk of accidents, physical injury, or sexual assault. It can also cause social relations to quickly deteriorate, or exacerbate or induce psychological and behavioral problems.

UCPD hopes all community members stay safe and act responsibly if they do choose to drink.
Remember, the legal drinking age is 21. Underage drinking puts you at risk for criminal and administrative sanctions.

From the University of Pennsylvania:

Consistent with its educational mission, the University sponsors programs which help eradicate misperceptions about alcohol use among peers, create opportunities for open, honest dialogue about alcohol use and abuse, and promote awareness of the physical and psychological, social and behavioral effects of alcohol consumption.

Oberlin College promotes an “intoxication” policy that centers on concern for the health of individual students and on the safety and wellbeing of the campus community. No person, while voluntarily intoxicated, shall engage in conduct that presents or creates a condition they should know is likely to present a risk of physical harm to another person, to the property of another, or to themselves.

From the University of Texas at Austin:

Alcohol may be a common feature at formal and informal functions of your student organization such as happy hours after a weekly meeting, parties after an all-day service project, or cocktail parties with alumni donors or prospective members. A study conducted at UT in 2004 by the Harvard School of Public Health found seven negative consequences associated with alcohol including hangover, regretting behavior, missing class, blacking out (or memory loss), arguing with friends, getting behind in school work, and having unplanned sex. In addition, students and student organizations increasingly have to deal with possible criminal charges, civil liability and university discipline associated with alcohol. It is important to be realistic about alcohol and its role on your organization, our campus and community.

The University of Texas at Austin has joined other top schools in the country in offering AlcoholEdu for College. Whether you are an abstainer or drinker, the program, designed to empower students, helps you to make well-informed decisions about alcohol, respond to the drinking behavior of peers, and achieve your academic goals.