After Sandy, only a lucky few getting buyouts 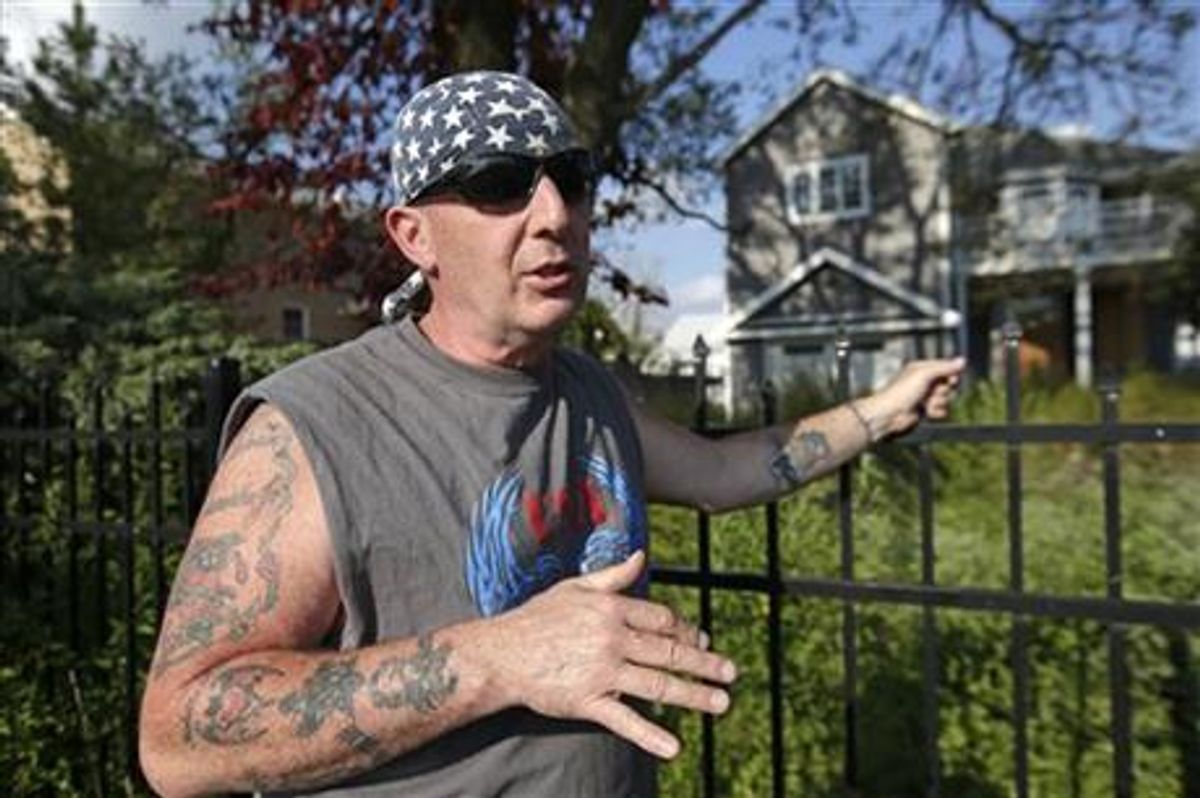 NEW YORK (AP) — The forces of nature had been threatening the Staten Island's Oakwood Beach neighborhood for years, flooding the streets every time it rained, sending crabs skittering into bungalows and swamping basements so regularly that it was just accepted as part of life.

But after Superstorm Sandy swept in with 20-foot waves that crashed over roofs and killed three people, those who have lived here for generations decided it was time to go. Soon, the state will buy some 400 homes, bulldoze them and never again allow anything to be built here.

Oakwood Beach will finally surrender to the sea.

The neighborhood is the first — and so far only — New York City community to be totally bought out under a state program that promises to turn wrecked neighborhoods into perpetual green space.

"The chances of us being able to sell this house at a later date and move on really were slim," said Danielle Mancuso, who is being bought out of the attached duplex she lives in with her husband and three young children. "Who could afford to pay the flood insurance premium? Because we're all attached, we could not elevate. We would really just be sitting ducks."

The state of New York plans to spend up to $400 million buying out and knocking down homes in Sandy-affected communities in the city and on Long Island, offering residents the pre-storm value of their houses. In New Jersey, the state is planning to spend about $300 million to buy about 1,000 damaged homes.

Most homeowners in Oakwood Beach have already applied and are proceeding toward the state's offer to purchase. The first house was demolished last week, and the state has already bought about a dozen homes. New Jersey officials purchased their first two homes last week.

Getting a buyout is the equivalent of winning the lottery for homeowners who lost everything during the storm, although not all residents want to be bought out. On New York City's Rockaway peninsula, for example, homeowners are determined to stay put and rebuild.

Much of the clamor for buyouts is coming from Staten Island, where waves slammed against third-floor windows and 23 people drowned, most of them trapped inside their own homes.

Although Oakwood Beach's buyout push has been a success, the future is far less certain for hundreds of people who have signed petitions demanding the same deal in nearly every other devastated shorefront community on Staten Island: New Dorp Beach, Midland Beach, Ocean Breeze and Tottenville, among others.

Right now, those areas are only eligible for a city program that buys individual properties for redevelopment — a program that so far has purchased only one home. But because many have yet to receive a dime from the city's Sandy aid programs, they're skeptical.

In Ocean Breeze, a neighborhood that remains mostly deserted since the storm, about half of the 120 homeowners have signed a petition requesting a buyout from the governor's office.

"We're below sea level," said Frank Moszczynski, who lives on a creekfront block where one house floated across the street and several others were demolished. "We're in a bowl that was created at the end of the ice age."

State officials say they chose to buy out Oakwood Beach after analyzing historical flooding data and the Federal Emergency Management Agency's scientific flood maps. The other crucial factor was quick mobilization: residents began marshaling resources for a buyout the day after Sandy hit.

Among them was Patti Snyder, who grew up on the block and never left. Her brother, Leonard Montalto, lived down the street. Two days after the storm, when his body was found amid the ruins of his home, Snyder knew it was over.

"That's when we knew we weren't going to rebuild at that point," she said. "It just took everything out of us."

Monte was standing in the middle of his flooded home the day after Sandy, ankle-deep in toxic sludge, when he realized his house was beyond saving. He walked out and hasn't gone back in since.

He still can't bring himself to approach the side of the house where his good friend, John Filipowicz, used to show up with a six-pack of beers and burgers to grill after work. Filipowicz died, along with his son, in the basement of their home.

The residents of Oakwood Beach are still working out the details of their buyouts but rest easier knowing they'll receive the pre-Sandy value of their homes — enough to set up somewhere far from shore.

Monte grew up poor in Brooklyn and always vowed to give his two daughters a home they could be proud of. Twelve years and more than $500,000 later, he had transformed his bungalow into a beautiful, slate-gray home with a widow's peak at the top. On clear nights, he'd sit on the second-story deck and watch the lit-up Staten Island Ferry crossing the bay.

Now the swimming pool that he worked so hard to afford has been overtaken by nature. Minnows dart among seaweed and algae in the murky water. Halloween decorations that adorned the house last fall are still lying on the patio.

When Oakwood Beach is at last returned to nature, Monte hopes a memorial plaque will be erected on a tree or a park bench to remember his neighbors who died. But he won't come back to see it.