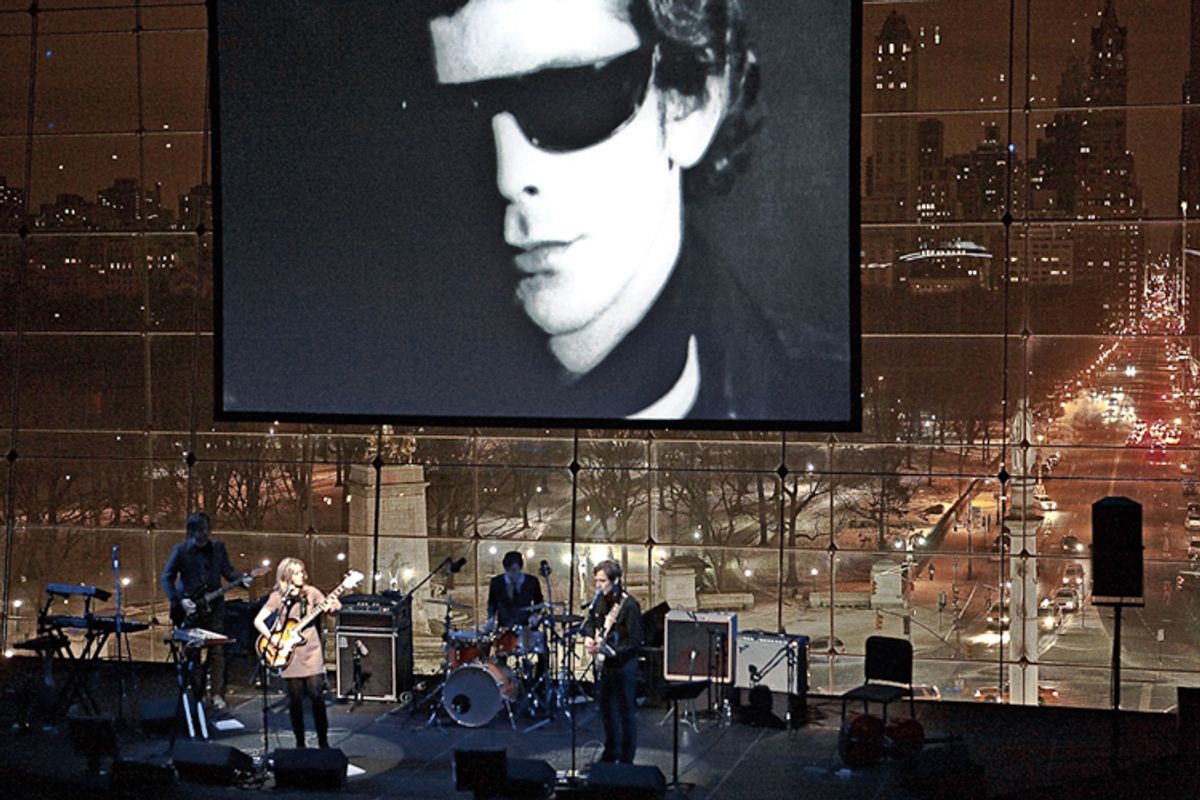 On Saturday night my wife, Britta, and I performed our multimedia show, "13 Most Beautiful: Songs for Andy Warhol’s Screen Tests," at a festival in Las Vegas; this show pairs short, silent film portraits by Andy Warhol with a score and songs we have created for his subjects. At approximately 9 p.m. I was singing “Not a Young Man Anymore,” a song Lou Reed wrote at the age of 24, while his 24-year-old self (frozen in time on the screen behind us) drank Coca-Cola and stared at the audience.

When Britta and I sat down to score Warhol’s "Lou Reed," we first watched two very different films, shot a few months apart. In the first, he is wearing a jacket and turtleneck, smoking, looking nervously from side to side, the picture of a sweet yet mischievous college graduate. We considered this, but ultimately went with a film shot a few months later, where Lou is clad in a black leather jacket and wraparound shades, drinking Coke. Reed himself later claimed that the look of the Velvet Underground, dressed in black, and wearing shades, originated with Warhol’s request that they wear dark clothing onstage while he projected films and bright lights on them.

These two films suggest the two sides of Lou Reed, a musician capable of writing and performing sweet songs like “Perfect Day,” “Pale Blue Eyes” and “Love Makes You Feel,” but also the rock 'n' roll animal who brought us “Sister Ray” and "Metal Machine Music."

Driving out of Vegas Sunday morning, my phone started to buzz with text messages about Lou Reed’s passing. The first was from my friend Pete Kember, aka Sonic Boom, a member of the great English band Spacemen 3, who once reworked Reed’s “Street Hassle” into their own “Walkin’ with Jesus.” It is quite obvious that without Reed we cannot imagine David Bowie, Roxy Music, the Stooges, Joy Division, Big Star, Sonic Youth, the Only Ones, Mazzy Star or Stereolab existing in quite the same way. Reed inspired and influenced on many levels; some look to his bold and inventive guitar playing, others to the poetry of his lyrics, still others his vocal delivery, his own attitude. He is one of those singers who in some respects is hardly a singer at all, closer to Marlene Dietrich than to the doo-wop singers that he loved -- and yet he became one of the great voices in rock, a singer who at times will simply talk his way through a song.

Lou Reed is responsible for at least a half dozen albums that surely count among the greats in the history of rock 'n' roll. Unlike Bob Dylan, or the Rolling Stones and Beatles, whose influences are tattooed all over their early recordings, the Velvet Underground seemed to appear fully formed, beyond influence; they dropped a debut, "The Velvet Underground & Nico" (also known simply as “the banana album”), onto a world that was perhaps not ready for it, to a resounding thud in terms of sales. This was not a band copying blues musicians, nor electrifying old folk songs, but playing music that fused rock 'n' roll structures with new subject matter, strange avant-tunings and dark, discordant sounds. Their second LP, "White Light, White Heat," took the noise even further and again has to be considered a landmark album, as is their third and perhaps most beautiful record, "Velvet Underground," a much quieter affair (after the departure of John Cale).

Their fourth album, "Loaded," might be considered a lesser masterpiece by comparison but still it contains some of their best moments. Songs like “Sweet Jane” and “Rock and Roll” should have proved that the V.U. could write radio hits -- and yet no hit was forthcoming. My own favorite Velvets album (and for my money the best live rock album, period) is "1969: The Velvet Underground Live," released in 1974. When I was a high school student in the late ‘70s, "1969" was, incredibly, the only Velvets album available in stores, so that was where I started. At any rate the live album captured them at their hypnotic and thumping best, with very different arrangements of “Sweet Jane” and “Lisa Says” and “What Goes On,” recorded not in a cavernous arena where sound bounces all over the place and singers try to connect with fans in the nosebleed sections, but in an intimate rock club on a Sunday night in Dallas, and it is the dry intimacy of these recordings that make them so special.

After the Velvets came a long solo career, with perfect albums, and the occasional head-scratcher. But it is not possible to make records for 48 years without missteps; I can’t think of a single artist who was perfect through the musical trends of the ‘70s and ‘80s. His debut solo album, "Lou Reed," was loaded with good songs but was underwhelming -- considering what came before it -- and I think some of this can be attributed to studio musicians who didn’t quite get what he was about, but this album gave us “Love Makes You Feel,” and “Ride Into the Sun” (this latter already recorded several times by the Velvets but not released).

I have heard Lou refer to himself jokingly as a one-hit wonder, and this is on account of his second solo album, "Transformer," a perfect LP that yielded three of his greatest sides, “Perfect Day,” “Satellite of Love” and the one hit he refers to -- “Walk on the Wild Side.”

People have their own opinions about his ‘70s output; is "Metal Machine Music" genius or unlistenable (or both)? "Coney Island Baby" features the sublime title track where Lou ruminates on his desire to “play football for the coach” and the equally great “A Gift” where he declares “I’m just a gift to the women of this world.” "The Bells" (1979) is generally overlooked but this strange, dense album delivers “I Wanna Boogie With You.” Even his lesser albums contain memorable and unique vocal performances.

For some the pinnacle is "Berlin"; my own favorite Lou Reed solo album is 1978’s "Street Hassle," a timeless album that still sounds weird, that sounds like it could have been released yesterday. The highlight is the 11-minute title track (in three parts) that was used to great effect (according to Reed, this was the favorite use of one of his songs in film) in a crucial powerful moment of Noah Baumbach’s "The Squid & The Whale."

Through the ‘70s Reed stepped away from the guitar, perhaps tired of the instrument or searching for new ways to make records (after all, his biggest success to date had come on albums where he did not play) or possibly intimidated by the virtuosic guitarists he invited to record with him. The prime example is 1974’s live album "Rock ‘n’ Roll Animal," which features Dick Wagner and Steve Hunter on guitar, playing dazzling über-rock reworkings of Velvets songs. Many V.U. purists hate this album -- it appeals more to stoners and Deadheads -- and yet was also a Saturday night staple for many partying teenagers and aspiring punks in the late ‘70s and early ‘80s. Personally I have a soft spot for it. But for live ‘70s Lou Reed, singing at his best, singing with the vocal attitude that he owns, I prefer the bootleg (now an official release) "American Poet," recorded in Long Island late in 1972, and featuring backing band the Tots, or "The Phantom of Rock" (still a bootleg) live at Alice Tully Hall in January 1973.

1982’s "The Blue Mask" is the first of several albums featuring Robert Quine on guitar, and apparently it was Quine who requested that if he joined the band, he wanted Lou playing guitar also, so maybe we have him to thank for the return of Lou Reed as guitarist.

With the inspiring "New York" (1989) Lou made his best album in years, writing “Romeo & Juliet,” “Halloween Parade” and “Dirty Boulevard.” His ‘90s albums are a mixed bag, but still each album contains gems: “Sword of Damocles” from "Magic and Loss," the jazzy “NYC Man” from "Set the Twilight Reeling" and the moving “Ecstasy” from the album of the same name.

I was lucky enough to tour with Lou Reed, first when the Velvet Underground re-formed to tour Europe in 1993; he picked Luna as the opening act for this tour and again for the 1996 tour, where Lou was playing "Set the Twilight Reeling" and we were performing "Penthouse." I had been told that Lou could be prickly; he certainly had a reputation for being surly with journalists (especially English journalists, whom he seemed to enjoy antagonizing), but I have learned that a lot of people say a lot of things about people they have never met. One thing I know for sure is that Lou was generous and attentive to us; he would always stop his own sound check in time for Luna to play a few songs (and I’ve been on plenty of tours where the headlining band does not bother with that nicety).

I watched Lou’s band night after night. Sometimes his unwillingness to sing his melodies as he wrote them would frustrate me, and yet every night there were moments where he would slip into an older voice (and he had several to choose from, but all were facets of Lou Reed) and deliver vocal phrasing that was genius.

One afternoon in Toronto Luna started playing “Ride Into the Sun” at sound check and Lou instantly proposed that he and I sing it together that night. So for the last song of our set on the rest of the tour, Lou would wander out onstage and sing with us. We liked to think our guitar sounds were pretty cool but Lou’s steely guitar was beautiful too, in a harder way. You can check it out here, recorded live at the Beacon Theater on the last night of our tour.