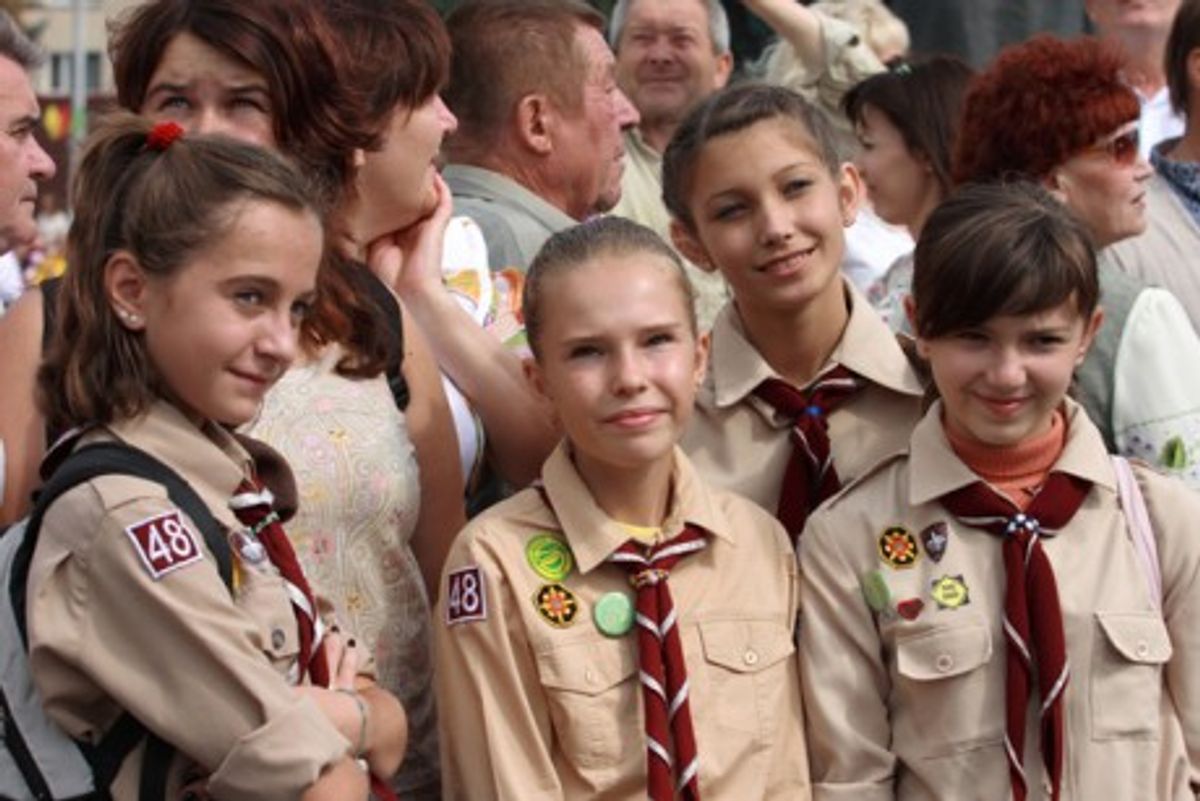 1.  Kevin Swanson is begging you not to buy those lesbian Girl Scout cookies

How, you might ask, can a cookie be lesbian? And which one is the most lesbian? Is it the famous chocolate covered Thin Mints, or those scrumptious Do-si-dos Peanut Butter Sandwiches?

Right-wing pastor Kevin Swanson is not buying sweets from his local Girl Scouts. And he doesn’t want you to, either. Because if you do, you are helping them to promote this oh-so-harmless-seeming, but secretly dastardly organization’s lesbian agenda and also its baby-killing agenda. Also, they’re commies.

Where does he get these ideas about what is truly behind the Girl Scouts?  We don’t know. Perhaps they come from the little voices in his head, which are also telling him the Girl Scouts of the USA is “a wicked organization,” that doesn’t promote “godly womanhood.”

And nothing screams independent woman more than Do-si-do.

“I don’t find it particularly hyperbolic for a man to say, ‘I’m not gonna give a damn about female rape victims anymore,’” Elam, founder of the website A Voice for Men, said in a video posted Sunday on YouTube. “They have tons of money, of law enforcement, of special programs funded by the government, of social consciousness – schools have Take Back The Night rallies, everything you can possibly think of.” Later he said, “I stand behind John for making that video.”

Oddly, Hembling, the editor-in-chief for A Voice for Men, didn’t quite stand behind the video because he took it down from his own Youtube channel, although he’s left plenty of clues indicative of his mindset towards women. At one point he said he was attracted to the intellectual underpinnings of the men’s rights movement because women are “without the capacity for moral agency.”

Don Yelton, the now-former N.C. voting official, made a splash this week when he told Jon Stewart that his state’s new stringent voter I.D. law is sound, because “if it hurts a bunch of lazy blacks that want the government to give them everything, so be it.” He assured the "Daily Show" host that he is not racist, though, and by way of illustration, pointed out that, N*** say n**** all the time so what’s really racist is not letting white people say n****. Especially when they just really love saying that word.

Predictably, he lost his job as precinct chair in the Buncombe County, North Carolina Republican Party the next day, and in the wake of that kept right on going with the same kinds of statements, ‘cause why not at that point? And he really loves saying that word.

The Huffington Post dubbed him the “most racist Republican” around, but we think that’s a pretty deep bench. He is, however, still in the running for the stupidest Republican around, but that, too, is a very competitive race.

4. N.C. (yes, again) State Rep. Larry Pittman: Obama not a traitor (to Kenya, where he was born, of course)

Let it not be said that Republicans are exaggerating President Obama’s crimes in, say, a lame attempt to impeach him. This week, Pittman made a funny birther joke to a sympathetic town hall audience, and just cracked the house up. It was really very clever. Apparently Pittman had recently seen an image of the President with the word “traitor” stamped across it. An eminently reasonable man, Pittman told the Concord, N.C. crowd: “I don’t always agree with the guy, I certainly didn’t vote for him, but I gotta defend him on this one. I just don’t think it’s right at all to call Barack Obama a traitor. You know a lot of things he’s done wrong, but he is not a traitor. At least not as far as I can tell, because I’ve not come across any evidence yet that he has done one thing to harm Kenya."

And they laughed and laughed.

Pittman, also a Presbyterian minister, is such a card. Some of his other kneeslappers include endorsing public hangings of doctors who perform abortions, and saying “the only thing illegal aliens have the right to do in North Carolina is to leave.”

So funny we forgot to laugh.

Casino mogul, GOP mega-donor, and funder of hawkish, rabidly pro-Israel think tanks, Sherman Adleson is still finding ways to make his voice heard after donating and wasting vast sums to Romney and other Republicans in 2012.

At a panel called “Will Jews Exist? Iran, Assimilation and the Threat to Israel and Jewish Survival,” at Yeshiva University in New York this week, he helpfully suggested giving Iran a little warning nuke to speed along the process of convincing them to get rid of their nukes . . . because, in his view, what’s the good of diplomacy? He has it all thought out, explaining that if you nuke some nearby desert, all you hurt is a “few rattlesnakes and scorpions, or whatever,” (definitely not true). Then you say to those holocaust-denying mullahs in charge, “See! The next one is in the middle of Tehran. So, we mean business. You want to be wiped out? Go ahead and take a tough position and continue with your nuclear development.”

Please tell us that despite his mountains of cash, no one is really listening to Sherman Adelson.

6. Joe the former Plumber: Democrats are the lynchers

Joe Wurzelbacher, famous for being trotted out by the McCain campaign to state his opposition to a tax hike on the wealthy that would not have affected him, is still trying to extend his 15 minutes of fame. (It beats fixing people’s pipes, we suppose.)

After outspoken Florida Democrat Alan Grayson provocatively used a burning cross for the “T” in Tea Party, Wurzelbacher, still trying to kickstart a career in conservative politics, tweeted that it is the Democrats who have the racist history, and included an image with that burning “T” in the word “Democrat.”

Grayson refused to take back his comments about the Tea Party being no more popular than the KKK. He said his comparison comes from the group’s "relentless racist attacks against our African-American president."

"[T]here is overwhelming evidence that the tea party is the home of bigotry and discrimination in America today, just as the KKK was for an earlier generation," Grayson said in a statement provided to HuffPost. "If the hood fits, wear it."

7. Coach Daubenmire: Christians are being bullied into not bullying gays

Dave Daubenmire, number 607 in the “Dictionary of American Loons,” is an expert on bullying. His high school coaching career ran aground after he coerced students into praying in school. Now he has parlayed his fame into anti-gay rants and being a general loudmouth liar for Jesus. This week he went on a kind of circular rant about bullying, saying in a Youtube video: “The whole bullying idea is built around the homosexual agenda. It’s an effort to try to get people not to criticize or make fun of homosexuals.”

He does not agree with that. In fact, he thinks it is Christians who are being bullied because they’re not being allowed to express their hatred of homosexuals, or to bully them.

But he has some deeper thoughts about the whole bullying thing.

“I don’t like bullying,” he said. “But bullying is a part of life. If we want to make Americans tough again, we are raising some of the softest children in the world. My father’s generation would be ashamed of how sissified our kids have become.”

So, bullying can be a good thing. And following that logic, it could be good that Christians are being bullied into not bullying gay people, because it’ll toughen up those lily-livered Christians.

It is so liberating to be freed of any semblance of logic in thought. Bradlee Dean, who is too-crazy-even-for-many-Republicans (but not for Michelle Bachmann) was at it again this week. The “Sons of Liberty” radio host, fundamentalist Christian rocker, and all-around nutjob, noted in a column for WorldNetDaily that “President Barrack Hussein Obama” has appointed “225 homosexuals” to key positions in the government.

There are things Dean likes about Shariah law and radical Muslims, like executing gay people, a practice which he says makes them “more moral than American Christians,” according to Rightwingwatch.

We’re just a little unclear as to why “secretly gay” Obama would want to implement laws that would have himself executed.

9. Group of Christians refuse to tip waiter, but are nice enough to leave a note explaining his “homosexual lifestyle is an affront to God”

So, a group of Christians walk into a bar. Well, it was a restaurant in Overland Park, Kansas. And they ate and made merry, then left. The joke ends there. When 20-year-old server, according to KCTV Fox 19, went to clear the table, he found a note instead of a tip.

“Thank you for your service, it was excellent,” it read. “That being said, we cannot in good conscience tip you, for your homosexual lifestyle is an affront to GOD. Queers do not share in the wealth of GOD, and you will not share in ours. We hope you will see the tip your queer choices made you lose out on, and plan accordingly. It is never too late for GOD’s love, but none shall be spared for queers. May GOD have mercy on you.”

This is what passes for Christianity these days? Jesus is rolling over in his grave.

Against all evidence—but then again what does persnickety evidence have to do with a right-wing argument?—Rep. Steve Stockman (R-TX) is hailing his home-state senator Ted Cruz as a heroic visionary for leading the Republican push to shut down the government.

He compared Cruz’s efforts to the Battle of the Alamo, a story dear to every Texan’s heart, because the takeaway is, “In every loss, there can be a victory.”

Stockman later opined that Obamacare is secretly a plot to drive everyone into a single payer system. Well, not that secret, he wrongly quoted Obama as saying single payer was his goal (if only).

The congressman also said he’s against any additional government funding to fix problems with the Affordable Care Act’s exchanges. “It is like saying my house is burning so we need more gasoline to put the fire out. It doesn’t make sense.”

No, congressman, and neither do you.