Dunes alone can't save us

Post-Hurricane Sandy, state governments are rushing to build protective walls of sand, but how effective are they? 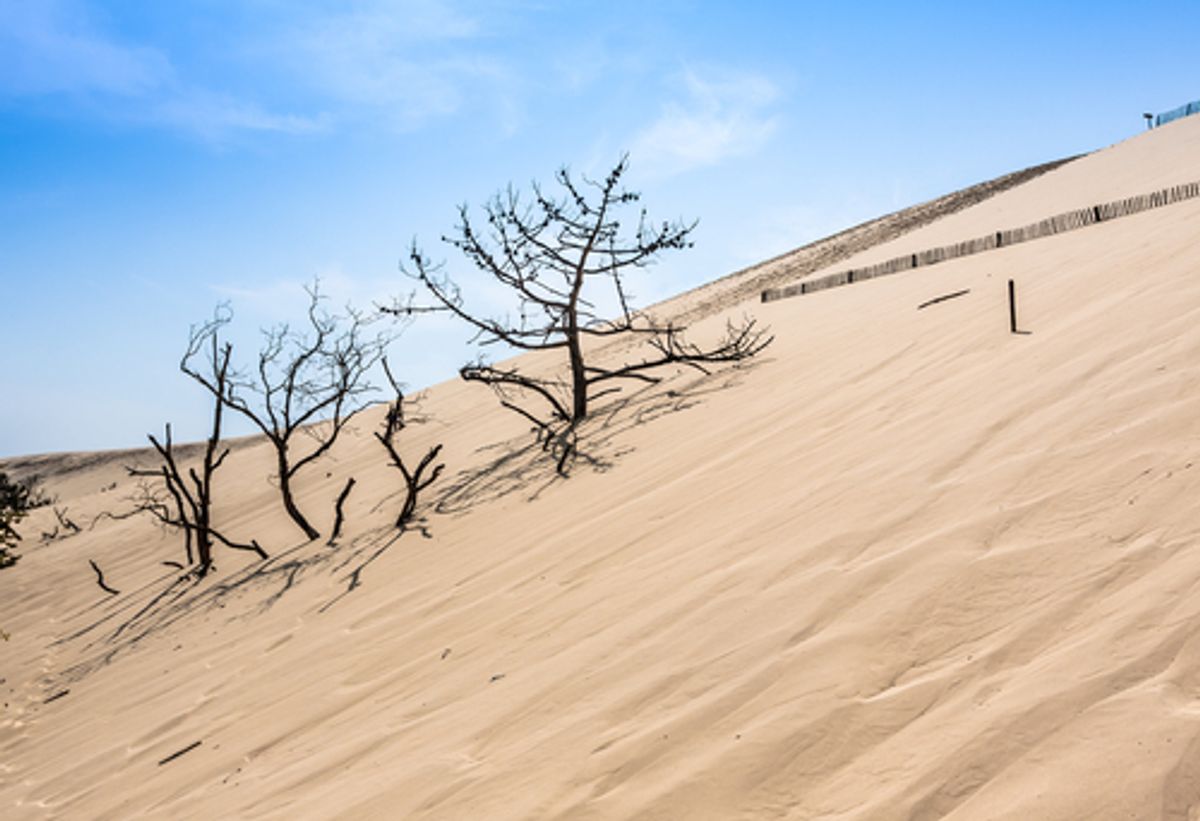 “Firm ground is not available ground,” wrote the poet A.R. Ammons. The line refers to the trouble that beach grass has finding purchase in sand dunes. Dunes, as everyone knows, shift. And as I have learned recently, so does the public’s perception of them.

Before Hurricane Sandy tore up the Atlantic Coast one year ago next week, most people living in beach houses along the New Jersey shore didn’t give too much thought to the sandy humps that stood between their homes and the ocean. In fact, tellingly, more than a few residents of New Jersey’s Long Beach Island refused to sign easements that would allow the federal government to construct a line of dunes, built out of millions of tons of underwater sand dredged from offshore and designed to protect the island’s homes from storms and erosion. At the time, the reason the islanders gave for refusing was that the dunes ruined their views of the beach from their homes’ ground floors.

But times change: now dunes are all the rage. Anyone who dares oppose the building of protective dunes stands the chance of being tarred and feathered by his or her neighbors. If this is an exaggeration, it is only a slight one. At Anchor Produce Market in Surf City, New Jersey, you can buy homemade mozzarella and sweet corn, among other delights. You can buy them, that is, unless you’re one of 35 homeowners who have not signed the easement agreement, in which case you can expect to be shunned and refused service.

I have closely watched the waning and waxing of dune love over the last decade. In 2008, I toured Long Beach Island with Sue Halsey, who worked for many years as a senior geologist at New Jersey’s Department of Environmental Protection (DEP) and has long advocated for dune construction in coastal communities. On Long Beach, she pointed out to me just how table-flat the island actually was, and predicted that without the introduction of large dunes a hurricane’s storm surge would simply rush, unimpeded, from the ocean to the bay.

This past February—five years after that trip, and four months after Sandy—I paid another visit to New Jersey. This time I was travelling with Dr. Orrin Pilkey, the coastal geologist who has long argued that people should cease development on our most vulnerable shorelines. (The journalistic fruit of that visit was the article “Down to the Seashore with Doctor Doom,” which appears in the current issue of Outside magazine.) Pilkey had been Sue Halsey’s professor at Duke University, and while he greatly admires the work of his former student—and certainly prefers the creation of dunes to the infinitely more pernicious building of sea walls, jetties, and metal groins—he takes a slightly more long-term and even skeptical view of the newfound mania for dune-building. As he has often pointed out, dunes can provide a false sense of security: an assurance that it’s okay to get back to business-as-usual, to keep building and living right next to the ocean, to keep whistling along until the next storm hits.

I asked Sue Halsey if she would like to join her old professor and myself for our tour of the Jersey-shore landscape, post-Sandy, and she accepted. As we drove around, I was treated to two points of view regarding the efficacy of protective dunes that manage to complicate one another even as they complement one another.

First the three of us, along with two locals, drove out to the town of Mantoloking, to witness the worst of the destruction that had been wrought by the hurricane. Four months after Sandy, the damage still appeared fresh. Huge beach houses looked like they had been shattered with wrecking balls. From there we drove south and surveyed more of the wreckage. In her role as Senior Geologist for the New Jersey DEP, one part of Sue Halsey’s job had been to tell people living in these beach towns that a hurricane was going to wipe them out, and that water would rush up their streets. Then she would tell them exactly what they needed to do to defend themselves. Unsurprisingly, people didn’t like this news very much, and they weren’t crazy about Sue, either. She didn’t care. She was an acolyte of Orrin’s—and, if it’s possible, she had developed even more of a taste for controversy than her controversial teacher.

We next entered Lavallette: a town that to Sue served as a case in point, although I doubt anyone in Lavallete that day knew that, right there in our backseat, sat their town’s true savior.

“I made them create dunes here after the storm in ’84,” Sue said. “And they hated me. I had death threats. But during Sandy, the dunes took the brunt. They acted like the bumper on a car.”

“Lavallette did really well,” one of our local guides confirmed.

“What do you mean you made them?” I asked.

Sue told us that after the ’84 storm, which took out the town’s boardwalk, she headed the DEP’s mitigation team. In the course of her duties she had informed locals that if they wanted state money to rebuild their boardwalk, they would have to put in dunes first.

“Oh my god—they said, I was the Wicked Witch of the West. They said, ‘What the hell does she know?’ And I said, ‘It’s simple. You do it, or you don’t get your FEMA money. I’m the one writing the report.’”

The first dunes were pathetic, scraggly things—but then they grew, as dunes will. They helped defend Lavallette during a bad 1991 storm, although a storm the next year took them out. It didn’t matter. After that storm—without any threats or cajoling—the town went ahead and built the dunes back up. By that point, the townspeople were believers.

Obviously, Sue Halsey isn’t above engaging in a little I-told-you so. And why shouldn’t she? She had, after all, told them so. And if she came across as a know-it-all, well, the simple fact is that she did know it all—or pretty close to it: FEMA rules, science, local politics, history. If every town on the coast had been forced to listen to Sue Halsey, Sandy wouldn’t have done nearly as much damage as it did.

A short drive out of Lavallette, in either direction, confirmed for us that neighboring towns didn’t fare nearly as well, water roaring down their streets. In fact, we thought, the people in these towns might now be wishing that they’d once had someone like Sue to hate.

Today, support for dune construction in the Garden State is nearly universal. Governor Chris Christie wants to line the state’s shores with dunes, as if Jersey were some sort of medieval castle. But if it’s any kind of castle, it should be pointed out, it’s a sand castle. And that, says Orrin Pilkey, is the chief problem with dunes. As he regularly points out, they can and will be broached, and we should never be fooled into believing that these ever-shifting mounds of sand are impermeable.

And these are facts you can’t conceal—no matter how high you build your dunes.