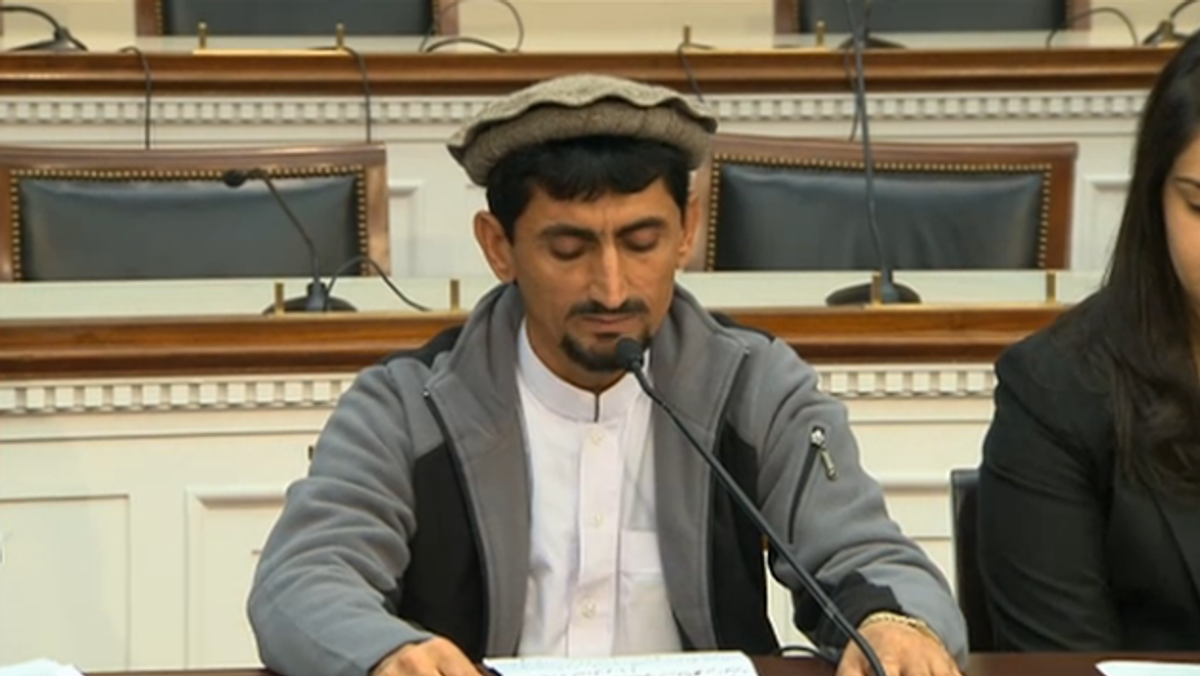 School teacher Rafiq ur Rehman traveled with his family from Pakistan's beleaguered Waziristan region to tell Capitol Hill about a day in October 2012 when his 67-year-old mother was blown to pieces by U.S. drone fire. In the same strike, three of Rehman's children, aged from five to 13, were injured.

Rehman, his 13-year-old son and 9-year-old daughter gave testimony on Capitol Hill Tuesday. The family, who were invited to Congress by Rep. Alan Grayson, D-Fl., told their heart-wrenching story in front of a typically small briefing turnout; Grayson was joined by Reps. Jan Schakowsky, Rush Holt, John Conyers, and Rick Nolan. Grayson assured the family and the media present that this constitutes a good turnout. As my friend and journalist Ryan Devereaux, present at the briefing, noted via Twitter, "This family went to remarkable lengths to share their story... the turnout at today's briefing is shameful."

Rehman's case was among the civilian tragedies noted in a recent report published by Amnesty International, which posited that a number of U.S. drone strikes in Pakistan constituted war crimes.

"Nobody has ever told me why my mother was targeted that day," Rehman testified. He continued:

... My mother is not the first innocent victim of US drones he continued. Numerous families living in my community and the surrounding area have also lost loved ones, including women and children, in these strikes over the years. Dozens of people in my own tribe that I know are merely ordinary tribesman have been killed. They have suffered just like I have. I wish they had such an opportunity as well to come tell you their story. Until they can, I speak on their behalf as well. Drones are not the answer.