"The Pete Holmes Show": A comic's own brand of weirdness, translated for TV

A few hiccups aside, the show features the Holmes fans love -- awkward, earnest, and obsessed with death 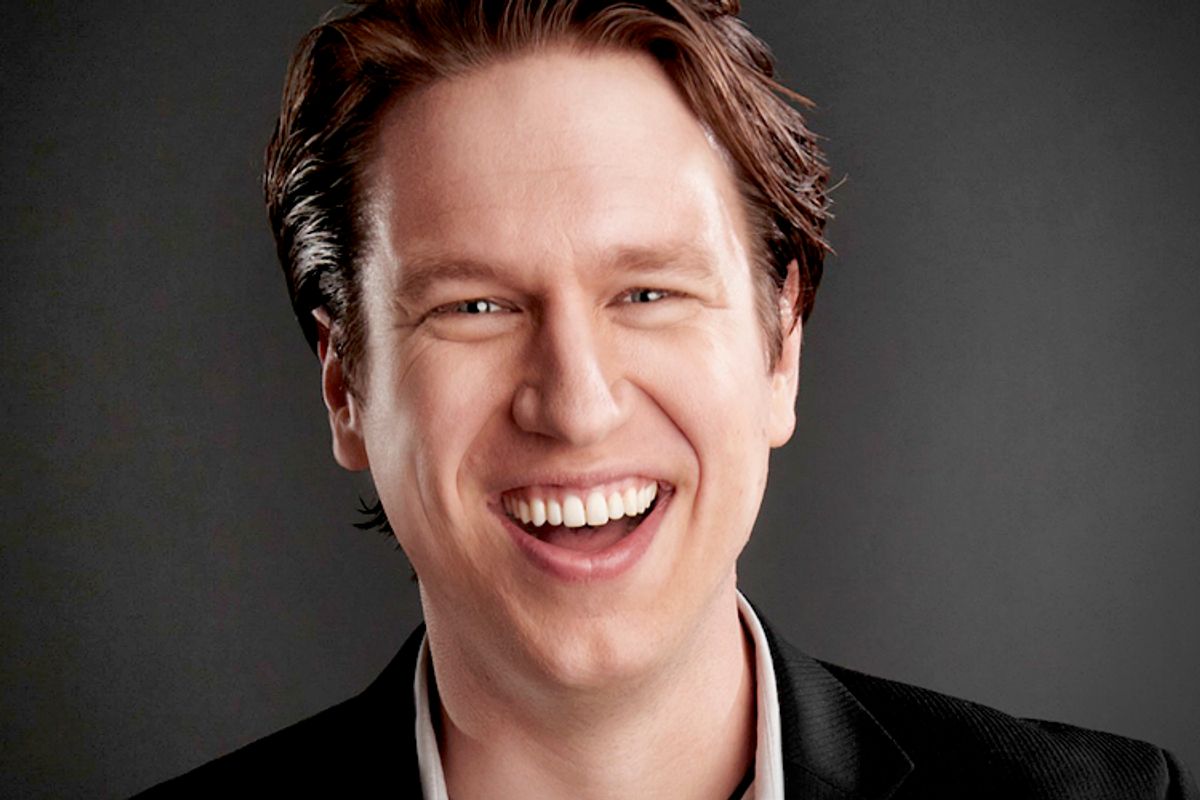 Pete Holmes is quick to point out that you probably don't know who he is. The oversized comic with the consistently giddy energy is probably best known in the rarified world of internet broadcasting where he generally hosts other stand-ups and comedy writers -- even more niche -- on his hilarious "You Made It Weird" podcast (notably, he was also the voice of the E*Trade baby). Last night, or rather this morning, marked Holmes' ascension to on-screen host courtesy of late night impresario Conan O'Brien.

Holmes' sketch comedy/celebrity interview half-hour debuted at midnight on TBS, immediately following O'Brien's own well-established hour.  The show opened with a pre-taped bit about the X-Men's Professor Xavier firing Wolverine for incompetence. The sketch was nerdy and funny and, for me, a little confusing.

Completely unfamiliar with Holmes' stand-up career, I became a fan of "You Made It Weird" sometime last year as a way of tracking the musings and insights of other, better-known-to-me comedians like Jim Gaffigan, John Mulaney, and Sarah Silverman -- also as a withdrawal substitute once I'd ripped through every episode of "Mike & Tom Eat Snacks." (If you've never heard of it, look it up.)

I quickly became enamored of Holmes' vulnerable, utterly transparent approach to interviewing people. Each of his guests -- most of them his friends -- was like Holmes' own personal therapist, sitting down as much to help him work through his issues as to plug his or her own progress. And there were quite a few issues; Holmes' divorce was, for example, a frequent, impromptu topic.

That's not to say that Holmes did not give adequate attention to his guests. And, yes, he occasionally gushed over their success. But that always came across as genuine admiration. Pete Holmes is always happy for his friends. And when he did decide to drill down, his questions were often about personal issues of faith and upbringing and relationships. The unearthed results were sometimes fascinating and often uncomfortable -- hence the show's name.

So, when Holmes opened the show in make-up as a character, I was immediately wary that his foray into television would be oddly impersonal. Ultimately, though, it turns out I was overly concerned. Holmes' opening monologue minutes later was about what I hoped it would be -- not exhaustingly hilarious, but sweet and sort of intimate; Pete at his most natural.

That opening routine -- one of his older ones, I hear -- was about buying a ticket to see Enrique Iglesias because his "joy quota for the month was a little bit low." Fans of "You Made It Weird" will immediately recognize this kind of hyperbolic, emotional transparency on Holmes part. The delivery was filled with all of his usual quirks: self-doubt, manic laughter, a near desperate need for approval, and a dash of childlike wonder.

After that was another pre-taped bit wherein Holmes visited the set of the Daily Show to get tips on hosting a show from Jon Stewart. It seemed both hastily taped and edited -- more awkward than funny, but maybe that was the point. Holmes is a rube next to a slick vet like Stewart, and yet not at all the one to try and hide it.

The following Q&A also seemed diced for time, but Holmes was so much more in his comfort zone. And why not? He was interviewing one of his best friends, arguably lesser-known comic Kumail Nanjiani. The funniest moment might have been when Nanjiani needled his homie for booking him as a guest instead of someone more attention getting like George Clooney.

Their conversation was just that, two friends and colleagues talking about kissing their respective dads on the lips and rehashing the broke days of touring small towns as stand-up comedians -- days not too long ago for either of them. It felt like "You Made It Weird" with a visual component. And, of course, once time had almost run out, Pete Holmes remembered to ask one pre-written question -- one you will most likely not hear asked of George Clooney on any other talk show at midnight or any other time: "Where do you think we go when we die?" Perfectly weird.