"We want to change the world": Inside a white supremacist conference aimed at millennials 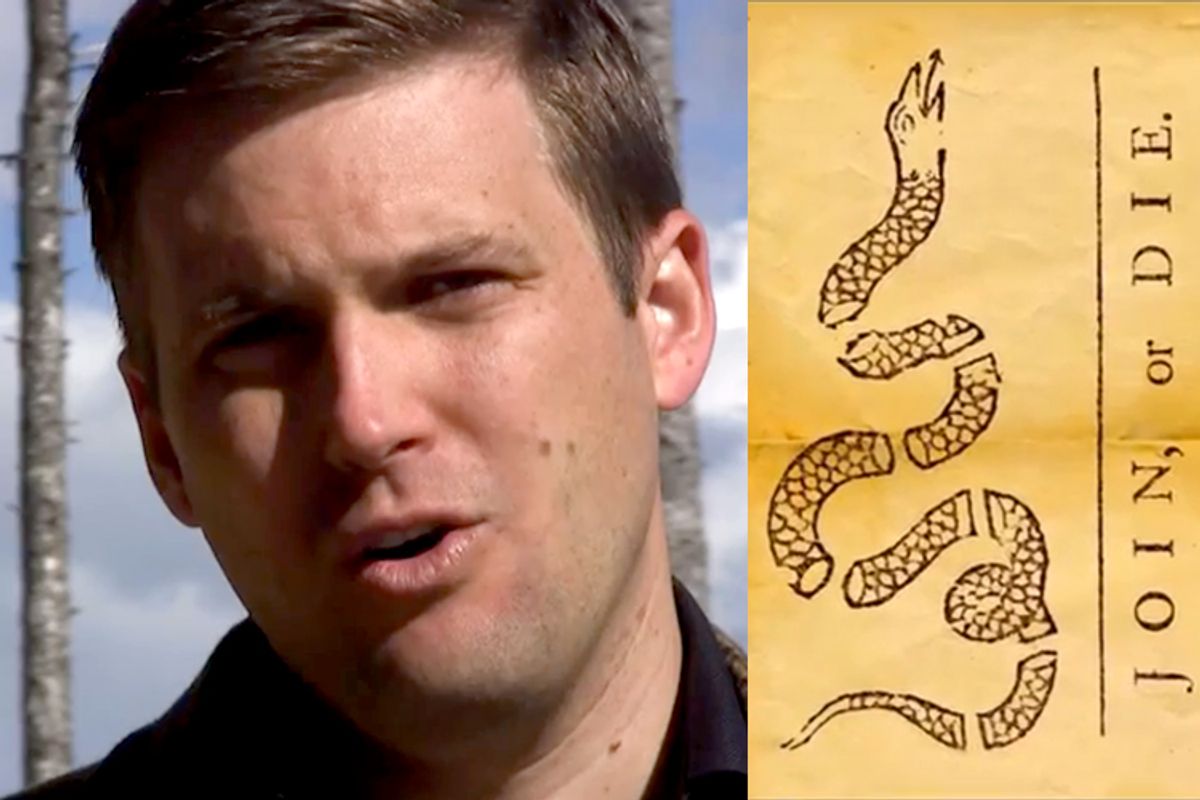 In the basement of Washington's Ronald Reagan building this Saturday,  100 or so preppy white folks gathered to talk about their disgust with modernity and their embattled race. The room felt like a bunker, windowless and cramped.

Near the White House, the men -- and handful of women --  bought books about the IQ differences between races and listened for nearly nine hours, as speakers from the U.S., Switzerland and France carried on about their shared European heritage, the impending financial collapse and the absurdity of believing all men are born free and created equal.

“God did not give people inalienable rights any more than he made them all equal and it is just the silliest kind of thing,” said Sam Dickson, an attorney who has spent decades supporting ultra-right-wing causes from Holocaust denial to Confederate revisionism. “That kind of thinking to the brain is like cotton candy to the stomach as compared to roast beef.”

The conference, titled “After the Fall: The Future of Identity,” was an opportunity to vent about a world that “has begun to crack and splinter under the pressure of mass immigration, multiculturalism and the natural expression of religious and ethnic identities by non-Europeans,” an online announcement explained. The conference comes as much of the white separatist movement is coalescing in opposition to Congress’ push for comprehensive immigration reform.

The host was the National Policy Institute, a quasi-think tank “dedicated to the heritage, identity, and future of European people in the United States, and around the world.” In sessions, speakers carried on about “The God That Failed,” “The Children of Oedipus,” the “Question of Identity.”

“We want to change the world,” NPI leader and conference organizer Richard Spencer announced  to his people. “We feel we are at the end of a certain paradigm and we want to take part in creating a new one.” The conference, in essence, was an opportunity for paranoids to hold a planning session/pep rally for their long-awaited economic or cultural collapse.

For the most part it was pretty small-bore stuff. In the lobby outside of the Polaris room, young men debated whether Ayn Rand’s message of individualism served the white race or fragmented it.

During a coffee break, a discussion about whether whites of different ancestry could ever live together in an ethno-state erupted from one of the tables.

“I don’t think there is any hope of people from old stock German families from the South and the sons of Yankee lawyers from Massachusetts to live together in the same place without a dramatic reshaping of the culture,” Wesley Morganston, a 20-year-old with long brown hair and washed-out black jeans, argued with an older conference attendee.

Perhaps the most surprising thing about the conference were the number of young men present, millennials in search of a political identity.

“I am not a fan of political correctness,” said Andrew Benson, 28, who had traveled from Canada to attend. Wearing a black suit vest, red collared shirt and black cargo pants, he looked more like he’d come to his conclusions as part of a teenage rebellion. “I have always had an odd attraction to things that are taboo.”

Most of the young men were eagerly looking to see NPI’s leader, Richard Spencer, who has transformed into a bit of an icon for those interested in what sometimes calls itself the alternative right. At 35, Spencer is still a young man himself. (I recently profiled him for Salon.)

“I do feel responsible for [the number of young people here] in a way,” Spencer said after the conference. “What we are talking about resonates with a younger people who are growing up in a different world.”

Spencer, a clean-cut and influential thinker in his circles movement, earned degrees from the University of Virginia and University of Chicago and worked as a mainstream conservative writer and editor before he moved to northwest Montana and began to give the white separatist movement a facelift.

“If you cannot be for your own people, who can you be for?” one young man who gave his name as Helmut Schmidt said as a reason for attending the conference. “The reality is when white people are the minority in this country, it is going to be real bad.”

But really the conference was open to any number of overlapping topics that might attract disaffected white youngsters. Jack Donovan, an anti-feminist writer and “advocate for the resurgence of tribalism and manly virtue,” served up his shtick.

Donovan has argued that feminists are trying to create  “gender-neutral utopias” that will make men into “doughy bonobos and chunky Chaz Bonos playing out their endless manic-depressive melodramas in a big bean-flicking circle of sterility, sickness and desperation.”

“Do black people as a group care what happens to white people as a group? Does a Mexican dad with three babies care about whether some white kid from the burbs gets a summer landscaping job? Of course not,” Donovan said during his presentation, adding later, “You cannot play fair with people who don’t care if you get wiped off the map.”

A Hispanic wait staff served every meal, and tended the bar. More black than white police secured the premise at the Reagan building as about a dozen protesters chanted at the young men going inside. Two of the protesters held a cardboard sign that accused attendees of wanting to “kill all blacks.”

During my time at the conference, I encountered a mostly congenial crowd, although one man whose name I didn’t have the pleasure of learning berated me for writing for Salon and asked if I “felt guilty” for writing for a magazine that “attacks people.” Another man, Sterling Spencer, 64 – no relation to Richard – learned I am childless and asked me

“So what would it take, for instance, for you to have a kid?”

Then he suggested that the U.S. should import more childcare providers. “Wouldn’t you like a couple of handmaids, maybe a nanny? So for $900 a month we’d get you the two handmaids and one nanny, and you’d be able to have kids then, right?”

Spencer  said he attended the NPI conference because he feels unsafe. He is concerned about ”being conked in the head” by minorities. (He takes some comfort in a "Ghetto Tracker" app that can supposedly help users avoid bad neighborhoods.) Although he acknowledged that NPI’s conference gave those like him a chance to come together, he worried that they were not the “monolithic culture” they would need to be to turn the tide and keep whites from becoming a minority.

He’s also worried that his five sons won’t have the economic stability he wants for them.  “In some ways, there is a sense of hopelessness,” Spencer said. “I don’t think there is any force on the horizon, any coalition, any group that can stop it.”

One might have expected a gathering like this to be full of swastikas or skinheads committed to a common cause or united in a call for uprising, but that’s not the aesthetic Richard Spencer is trying to cultivate. Not even all of the attendees wanted to talk about race.

A man named Roger Matthews, who attended with his wife, said he’d come to learn more about becoming self-sufficient, a topic addressed by Piero San Giorgio, a former Swiss businessman and author of “Survive – the Economic Collapse,” who encouraged the audience to create sustainable communities, convert their money to gold and throw out their televisions.

Matthews and his wife recently moved to a family farm in Massachusetts where they plan on raising animals, growing their own food and returning to a more sustainable life.

“Some of the people in there I think are a bit weird, some of them I think are a bit crazy, some maybe even evil, but they are interesting,” Matthews said. “ [Most] are a bunch of nerds who probably are not going to go anywhere.”