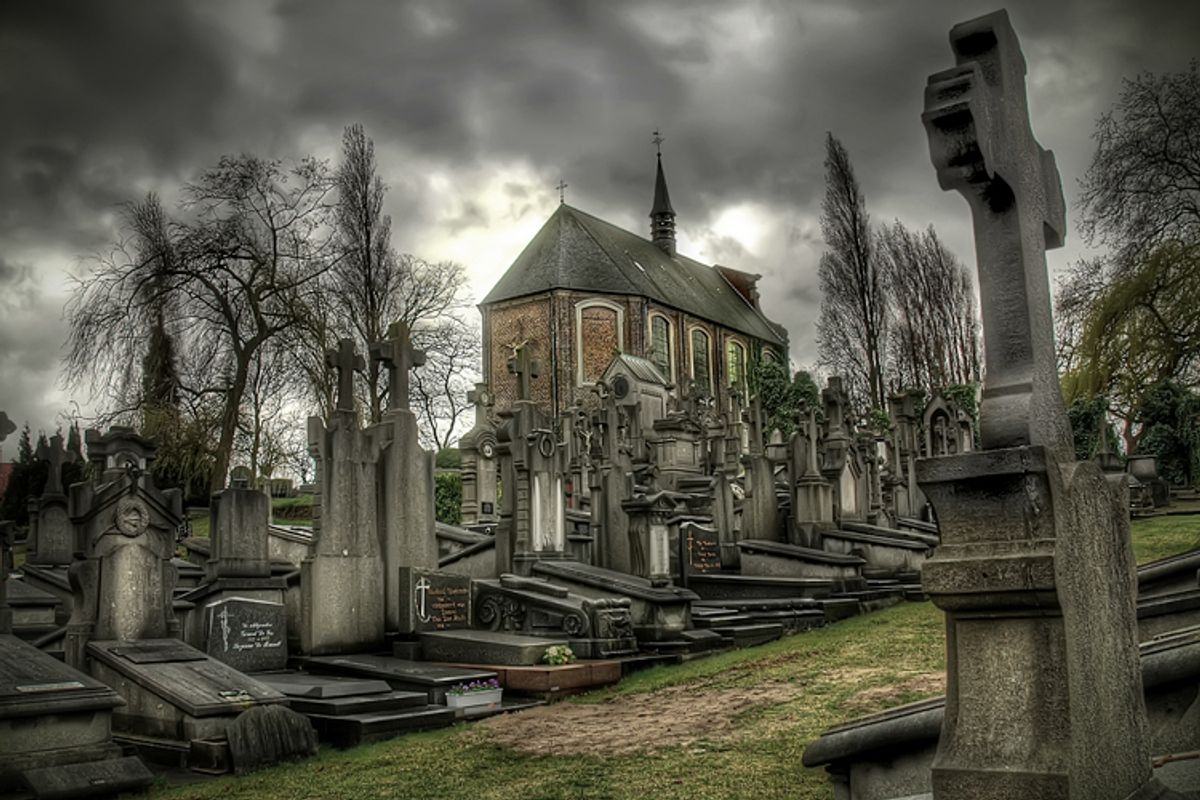 The two-sentence horror story has become something of a genre -- a super-popular Reddit thread this summer spawned numerous compilations. In honor of Halloween, Salon asked 12 novelists to try their hand at the form. Below are their ghostly, bloody, watery and surprisingly pet-focused forays into darkness.

It wasn't what you'd expect, how she knew she was never truly alone. It was the damp trail of moisture she sometimes found--along the arch of her spine, across her shoulders, between her breasts -- that let her know he was there.

Could it be that he really did remember to put the chains on the truck tires, that she came back from the valley with the baby formula as expected, in spite of the freak snowstorm, and nursed the child, nursed him that night and each night for the next three months at the appointed hour, the hour when once again tonight he feels her hand on his shoulder and rouses from sleep to find her standing over him, blankly beseeching, wondering where the child has gone, not realizing that the child is living with her parents now, that he couldn’t raise the child on his own, that he has since that night been incapable even of cooking his own meals in this empty cottage in the woods at the top of the hill their trucked slipped and swerved on, and off of which it tumbled in the snow all the way to the creek below; could it be that he has dreamed these terrible months of loneliness and guilt, that this is not her ghost, that this hand is corporeal, that the cold bed is an illusion and she has touched him only to acknowledge him as she rises to gather the child from the crib?
No, apparently not.

When I was 9, the birds stopped still in the sky and I saw the men that move between moments. They sang silently as they prepared the lake where my little sister was about to drown.

Because my mom was moving houses, she made me come over and go through all my childhood stuff. When I got home, the Raggedy Ann I’d bagged up to be tossed was sitting upright on my bed, smelling of smoke, with her hair half burnt and a charred smile that looked like it meant me no good.

Entranced, he followed her to her door and after she'd gone in, peeked through the keyhole, seeing only what seemed like a deep red lake. Only later did he learn ghosts' eyes are red.

By night on my bed in the Upper Western Galilee I felt a presence under me and feared it was an earthquake or a stray rebel forces’ boy or one of Assad’s men, but as my arm dangled down my kitty licked my fingertips and a great calm washed over my body. By morning I opened my eyes and saw that letters have been written on my bedroom mirror in blood: “Happy Halloween, stupid girl—not only pussy cats can lick.”

They rise, like steam, like gas fumes, from the Brooklyn streets, howling, wailing, their hands reaching for food that won't fall from the sky, their faces contorted, all gaping mouths, frightened eyes, but you don't see them.  "I was here," they say, "long before you arrived with your iced coffee and your yoga mat, I was here just yesterday, please let me stay," but you can't hear them, can't help them, can barely save yourself.

That licking of your toes — usually it's softer, warmer. You see the dog, standing in the other room, staring at you, silent.

For months I've followed you everywhere -- running to catch the bus, dancing with your husband on your birthday, bending (unseen, you thought) to steal a neighbor's flower. But I let you see me only now, my face behind you in the bathroom mirror in the middle of the night, because we're so close to being together forever.

Anna used to joke that ham and cheese on rye would be the death of Martin, and it was funny, because she meant of a heart attack that neither one of them could actually imagine, but then he choked to death one day when she wasn't in the house, and it wasn't a ham on rye at all but a fish bone, such as any normal person might have had trouble with at the wrong time.  And it took a year to solidify but by the year anniversary of his death, the nightly smell was unmistakable: at 2 in the morning would come the cured ham, 15 minutes later the milky, nationalist smell of American cheese, and finally, a half-hour in, the smell of freshly baked rye, a smell that had previously meant comfort to them both.

You crash into the kitchen and yell “Help!” at your grandmother, but you see that she has grown much older now, and that sitting next to her is a woman with a face that’s half snakeskin and half baby Angie’s, and that standing in the corner is your mother (though old now too, and though you still hear her screaming down the hill); you yell “Help!” again — and then an ancient, oceanic darkness is cresting somewhere behind you, and your grandmother finally turns to look at you, her stern eyes saying, “Go back outside, Nell,  and don’t upset your mother: it was after all,  such a very long time ago.”