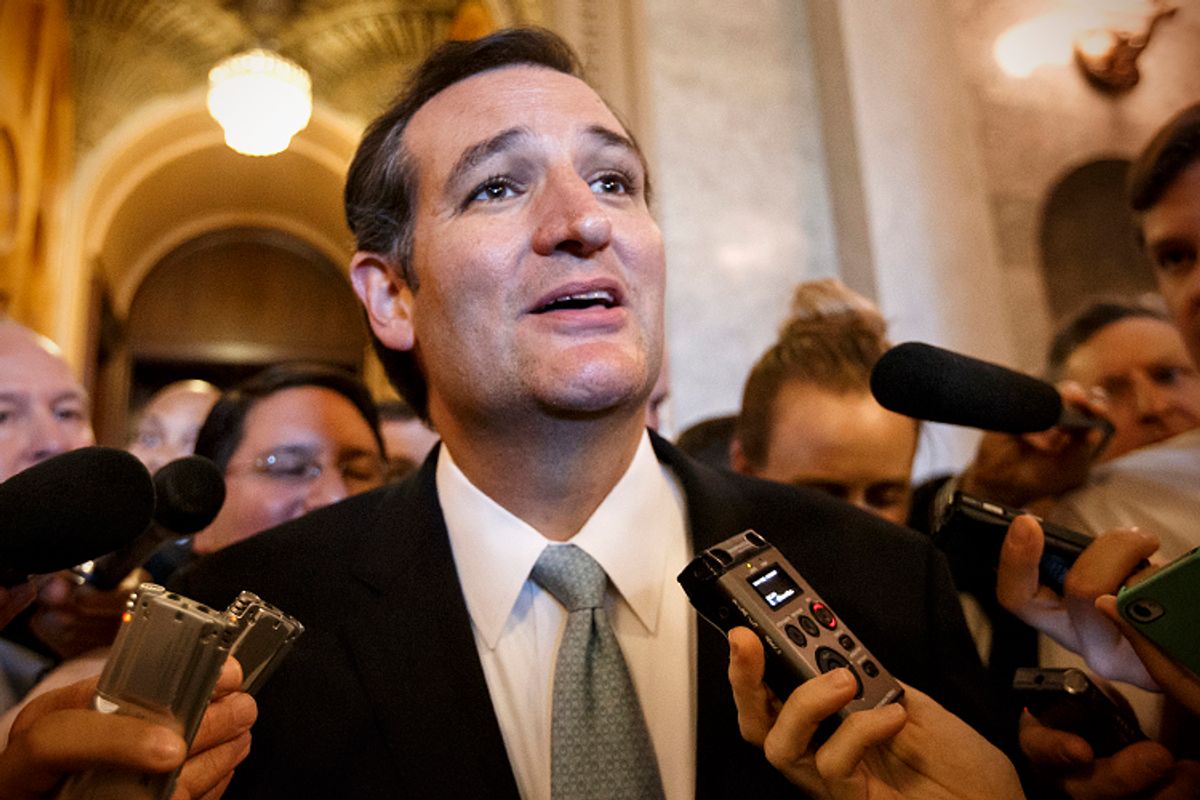 If you're a healthcare reform supporter and have found yourself arguing with a conservative about Obamacare this week you've probably been confronted with three different but related complaints.

1. Millions of people with individual market healthcare coverage are getting cancellation notices from their insurers.

2. People who got those notices are now experiencing "rate shock."

3. President Obama thus lied to the public when he claimed, repeatedly, that under Obamacare "if you like your coverage, you can keep it."

In a way it's a healthy development for conservatives because for the first time they're actually reacting to real testimonials from real people, instead of just regurgitating some derp they invented or read on Drudge.

As always, though, the point of the complaints isn't to address and rectify problems, but rather to deploy them as subterfuge to wreck the entire reform edifice.

We know that because conservatives never weigh the first two complaints against the very clear and obvious good Obamacare promises to do for the uninsured and previously uninsurable. Instead they fuse them into one, and respond to all attempts to clarify the situation by invoking the third complaint. Not everyone's experiencing rate shock, you say? The law dramatically improves the individual market relative to the pre-Obamacare status quo? Well, you're just covering for the fact that Obama lied.

I think it's plausible that Obama will address his past statements so at the very least people can focus on the former two problems, which are the ones that really matter to people. (For an unblinkered retrospective, read this piece by Jonathan Chait.) But in the event that he doesn't, or in the event that he does, but fails to break the cycle of non-responsiveness, here's a quick overview.

Some people who receive these notices will be pleasantly surprised to find that the most similar new plan offered by their current provider is actually cheaper than their old one. Others will be told that a similar plan will cost more. What they won't be told, because insurers don't want to downsell or advertise for their competitors, is that they're likely to find a different plan available through their state exchange that's closer to the same price or cheaper. If they can't find a cheaper one, then there's a decent chance that federal subsidies will reduce their out-of-pocket costs. It's only the remainder -- and it's likely to be a small remainder -- that genuinely will have no choice but to either pay more money (in some cases significantly more) or pay a fine and go without coverage.

That remainder will be higher than it needs to be if people are discouraged from shopping around. Healthcare.gov isn't helping in that regard. Neither are insurers or the conservatives who are pretending to care about rate shock.

And that's really the point I was making on Monday. Conservatives only care about these problems insofar as they can be used to trash or undermine the law in its entirety. That's why they never, ever mention any of the millions of people who will or are already benefiting from the law. If they did, they'd have to entertain solutions to these problems that don't essentially kick a tent pole out from underneath the system.

The disruption we're seeing in the individual insurance market is mostly by design. And it's mostly a good thing. Until October, the individual market existed to sell insurance to people who needed it least. Rates were low for healthy people precisely because their old, sick neighbors were priced or locked out of the system. They were also low because many of the policies on the market didn't actually fulfill the function of insurance, which is to hedge against financial catastrophe.

Obamacare eliminates each of these enormous flaws by 1) regulating insurance so that it covers lots of stuff and genuinely protects people from medical bankruptcy, 2) making plans available and affordable to the ill and elderly by banning price discrimination against sick people, and only allowing insurers to charge the elderly three times as much as the young for equivalent coverage, 3) providing subsidies to the poor and middle class to make coverage affordable.

The first change makes insurance costlier. The second turns the individual market into state-based group plans, like the one you probably participate in at work, where the young and healthy cross-subsidize the old and infirm. The third reduces impact of the first two for most, but not all, of the individuals affected by them.

Taken together, the changes create winners and losers, but almost by definition more winners than losers. That doesn't make it perfect by any means. We could reduce the impact of cross-subsidization on young, healthy people by making subsidies more generous or stretching the age band or loosening minimum essential coverage standards or some combination of the three. We could also create a public option! One of the ironic silver linings around having such a kludgey, complex system is that it's theoretically easier to adjust at the margin.

But conservatives didn't have any interest in helping the remainder when the law was being drafted, and the only solutions they'll entertain for the remainder now are ones that void protections for everyone else. Their tremendous outpouring of grief for young, middle-class people now comes couched in the false premise that the only available solution is complete repeal. You could counter that by any moral standard the system the Affordable Care Act creates is preferable to the one we had before, which subsidized the Ted Cruz family to the tune of thousands of dollars a year and left 50 million people without any coverage at all. But dollars to doughnuts their response will be off-point screeching about how Obama lied. Rinse repeat.