The twisted mind of "Ender's Game"

Orson Scott Card's bestseller is supposed to be an antiwar novel, but its real subject is closer to home 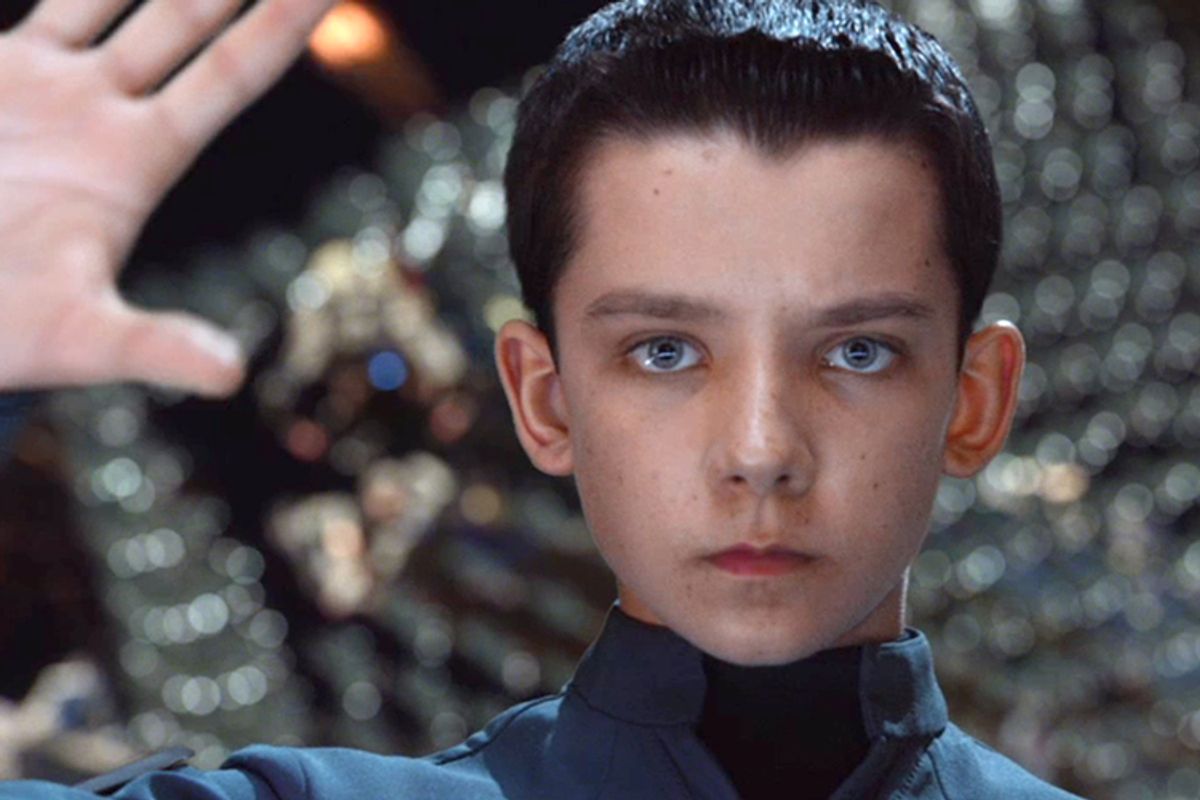 There's a short story by Tom Godwin, famous in science fiction circles, called "The Cold Equations." It's about the pilot of a spaceship carrying medicine to a remote planet. The ship has just enough fuel to arrive at that particular destination, where its cargo will save six lives. En route, the pilot discovers a stowaway, an adolescent girl, and knowing that her additional weight will make completing the trip impossible, the agonized man informs her that she will have to go out the airlock. There is no alternative solution.

This story was described to me by a science fiction writer long before I read it, and since it contains lines like "she was of Earth and had not realized that the laws of the space frontier must, of necessity, be as hard and relentless as the environment that gave them birth," I can't honestly call it a must. The writer was complaining about some of his colleagues and their notions of their genre's strengths and weaknesses. "They always point to that story as an example of how science fiction forces people to ask themselves the sort of hard questions that mainstream fiction glosses over," he said. "That's what that story is supposed to be about, who would you save, tough moral choices." He paused, and sighed. "But at a certain point I realized that's not really what that story is about. It's really about concocting a scenario where you get a free pass to toss a girl out an airlock."

I thought about this conversation often when reading Orson Scott Card's novel, "Ender's Game," for the first time last year, and I thought about it even more when reading "Ender's Game and Philosophy," a collection of essays edited by D.E. Wittkower and Lucinda Rush and published just ahead of the long-awaited Hollywood film version of the book. The essays collected in the book have titles like "Is Ender a Murderer?" and "What Would Saint Thomas Aquinas Do?" (Aquinas, 13th-century theologian who comes up surprisingly often in this collection, proposed a concept called the "principle of the double effect," which essentially says that you can't be held morally responsible for the known but unintended effects of your actions.)

"Ender's Game" has won a devoted following since it was first published in 1985, and people who first read it in the flush of youth seem especially enamored with it. The plot, which involves a future in which very young children are recruited to fight a hostile alien species, centers on a misfit boy who becomes a consummate leader and military tactician after being subjected to a brutal, manipulative training regimen. The novel culminates in a battle that Ender thinks is a simulation but that is, in fact, real and results, at his command, in the total destruction of the alien species. Later, he learns that the now-extinct species had not planned to attack Earth, and he is consumed with remorse.

The genocide of the "buggers," as the insect-like aliens are called, is not Ender's first experience with moral quandary. At the military academy, he is confronted by a bullying rival, and Ender believes he must conclusively defeat the other boy to avoid being attacked by him again and again. He unintentionally kills the kid, although this fact is concealed from all of the students until Ender puzzles it out on his own. Instead of intervening in the fight, the adult teachers (who are constantly surveilling their charges) hold back. "Ender Wiggin must believe that no matter what happens, no adult will ever, ever step in to help him in any way," a character called Colonel Graff explains. "If he does not believe that, then he will never reach the peak of his abilities."

The contributors to the "Ender's Game and Philosophy" anthology -- who mostly adopt the bright, lucid, helpful tone of teachers who believe there are less painful ways to reach the peak of your abilities -- raise a lot of interesting and valid topics. Drone technology, preemptive attacks, just wars, post-traumatic stress disorder, free will and the mind-body split are just some of them, and I do not doubt that young people captivated by the drama of Card's novel would get a lot out of discussing these issues, in class and beyond. Anyone would. Nevertheless, I soon found myself impatient with all the deep thought and searching philosophical rumination to be found in its pages. These matters aren't, to my eye, what "Ender's Game" is really about, in the same way that, to my friend, "The Cold Equations" isn't really about a stern-minded face-up to the harsh "laws of the space frontier."

What exasperated my writer friend about his colleagues was their conflation of a story with an argument. Stories aren't arguments, although they can contain them. If what you want to do is make a point -- about traumatized soldiers or genocide or the principle of the double effect -- it's really far more effective to simply do so directly, in an essay or, if you're feeling industrious, some actual reporting. A story's job, on the other hand, is to take us through an emotional experience, and the experience has to be an end in itself, even if it also leaves us with some ideas to chew on.

If you want to find the true subject of any story, look at where its emotional charge resides. This is often, underneath an otherwise conventional surface, a crazy, self-contradictory fantasy -- the classic case in point being romance novels, in which devastatingly handsome, arrogant, womanizing alpha males suddenly undergo a complete personality reversal upon meeting the Right Woman and become devoted monogamous homebodies. The heart of any work of fiction, and especially of popular fiction, is a knot of dreams and desires that don't always make sense or add up, which is what my friend meant when he said that "The Cold Equations" is really about the desire to toss a girl out an airlock (with the added bonus of getting to feel sorry for yourself afterward). That inconvenient girl, with her claim to the pilot's compassion, can be jettisoned as satisfyingly as the messy, mundane emotions the story's fans would like to see purged from science fiction.

In this respect, "Ender's Game" is less about the ethics of total warfare than it is about wanting to be a hero and a victim at the same time. Is there anything sillier than the idea that the entire planet would entrust its survival to a 10-year-old boy? Despite Card's narrative bushwa about them being somehow more adaptable to warfare, children are simply developmentally incapable of exercising the judgment required to command an army. Only a kid would find the idea of one doing so even remotely credible, in the same way that only as a child did I find it thrilling that Aslan let Peter and Edmund Pevensie (about the same age, or younger, than Ender) strap on armor and take up swords to defend Narnia. Even those people who are so depraved as to use child soldiers do so because children can be completely dominated, not because they make good leaders.

But, again, the plausibility of this scenario isn't really the point. What matters to Card in "Ender's Game" -- and I'm going to presume to think that I understand this better than even he does, given that he hasn't shown much capacity for self-reflection in his public life -- is that Ender has immense power and no responsibility, the mastery of a killer without ever choosing to kill. His remorse, when it comes, only does him credit, since he cannot legitimately be faulted for something he didn't know he was doing. Yet his heart bleeds for the buggers.

All of this serves to underline the specialness of Ender, a specialness that springs from his unique suffering and what we are encouraged to see as a sensitivity that surpasses that of his peers. At home, he is belittled as a surplus third child (families are supposed to keep their offspring to two) and tortured by his sociopathic older brother. At the academy, he's bullied and teased for being small and made to feel abandoned by the authorities, who have secretly selected him as a cadet of unique promise. All of these are familiar devices that authors of children's fiction use to foster identification with their protagonists. Harry Potter, mistreated by the Dursleys, is also targeted by bullies at Hogwarts, even as his status as "the boy who lived" singles him out as something more than an average kid.

But if Harry mostly just tries to keep his head down and muddle along as if he really were an average kid, Ender is wrapped up in his exceptionalism, convinced that he's both better than everyone else and utterly abject and forsaken -- a volatile condition that's not uncommon among adolescents. The difference is, while most children fantasize that the world revolves around them, Ender's actually does. He is both the most despised and the most exalted. The neglect of the school authorities truly is proof that they are obsessed with him. He is mistreated because he is so special. And when he comes to understand his role in history, his understanding is greater and more terrible than anyone else's. The eradication of the buggers (who turn out to be not so bad once you get to know them) matters most in the novel as the occasion for even more suffering for Ender and further proof of his soulfulness.

For all these reasons, I prefer the interpretation of "Ender's Game" that I first heard from the memoirist and critic Donna Minkowitz, whose interview with Card is one of the most memorable Salon has ever published. Long ago, she told me that she viewed the novel, which she loves, as an imaginative portrait of the inner life of an abused child, a fledgling psyche trying to reconcile the unbearable contradiction in receiving both love and gratuitous pain from the same source. She describes it as "the best book I have ever read about violence," and while I don't have much experience with violence myself, I believe that. I don't buy it as a meaningful depiction of the exigencies of war, however. The emotional climate of the novel is too intimate, claustrophobic and brooding, especially when compared to actual accounts by actual soldiers.

Of course, some fans of "Ender's Game" will be outraged at this muddying of what they'd prefer to regard as a trenchant novel about big ideas with the mere stuff of feelings and psychology. If that's the case, you already know what to do -- and, no doubt, just where to find that airlock.

"The Cold Equations," by Tom Godwin