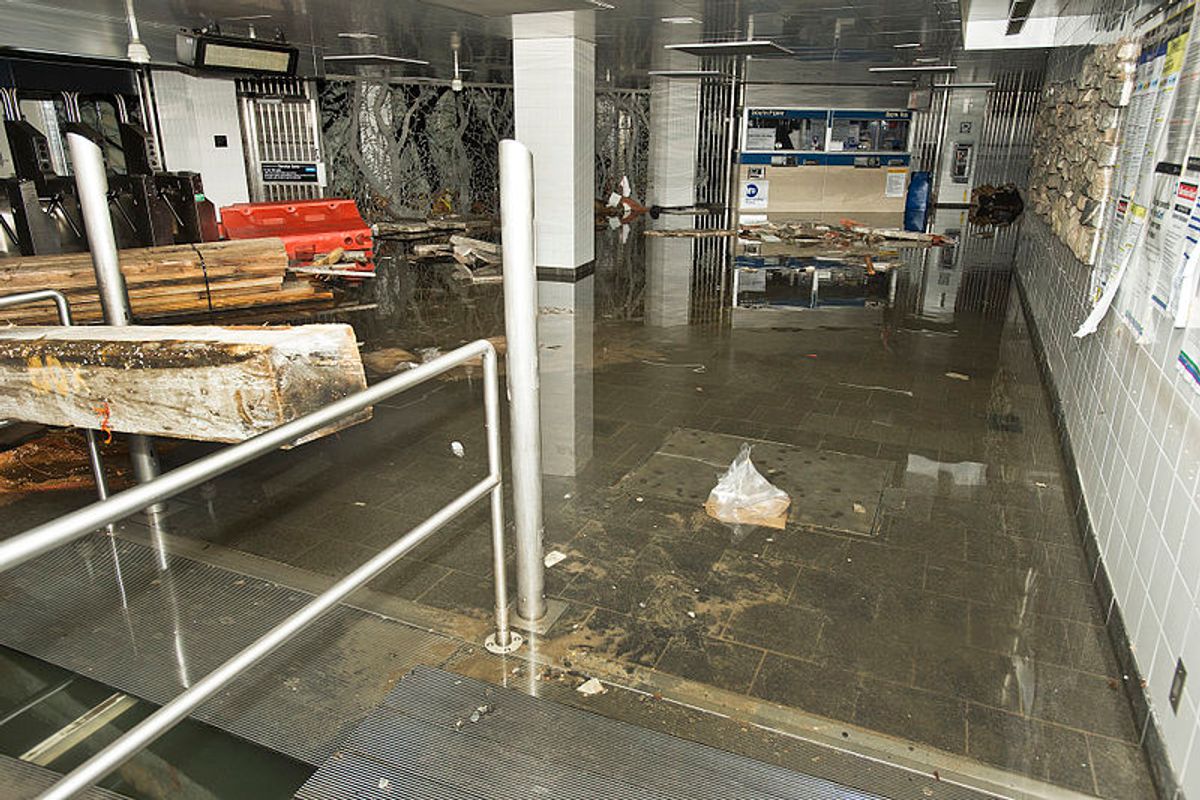 A year ago this week, Hurricane Sandy swept into the New York region—destroying lives and uprooting homes in what became the second costliest hurricane in U.S. history.

But as New Yorkers take stock of what was lost on the first anniversary of the superstorm, one result of Sandy’s destructive fury is only now becoming clear: the huge and still unquantifiable loss of records held by the Federal Bureau of Investigation (FBI) in or near the country’s financial capital.

The storm sent water streaming into several covert FBI file storage locations in New York and New Jersey, damaging between 8,000 and 9,000 cardboard boxes, each capable of storing hundreds of documents from investigations and cases spanning at least two decades.

By the time emergency contractors had drained the buildings, it was evident that many of those boxes —and the files within them—were irreparably harmed.

As the extent of the problem became clear, government personnel raced to salvage as many documents as possible, according to Rachel Ban Tonkin, supervisor of the National Archives’ Appraisal Team 1, which advises agencies on emergency file remediation.

“The FBI had a lot of flooding,” Ban Tonkin told The Crime Report, adding that authorities had only 72 hours to determine whether certain severely damaged files needed to be destroyed.

“It all revolves around whether the files are a threat to human life,” Ban Tonkin said. “With wet paper, you only have a short time to respond before mold and other factors come into play.”

During that time, response teams first needed to pump water from the buildings, Ban Tonkin said. Wet, but potentially salvageable, boxes of files — most of which pre-date digital recordkeeping — were then hauled into freezer trucks and freeze-drying facilities.

The FBI was unable to say just how many individual files were damaged or destroyed, but acknowledged toThe Crime Report that remediation — the time-consuming process of halting environmental damage — for the remaining files is still ongoing.

“More than 80 percent of the boxes of records damaged through Hurricane Sandy have been remediated and returned to the New York Field Office,” claimed said Christopher Allen, an FBI spokesperson. “Remediation efforts continue on the remaining boxes.”

For journalists and other civilians trying during the last year to get copies of files stored in the New York and New Jersey facilities, remediation has meant murky replies to Freedom of Information requests.

In May, The Crime Report filed an FBI Freedom of Information request for files related to Bernard Eastlund, a deceased former government scientist.

Eastlund was a San Diego, CA-based physicist who worked on a variety of defense department projects and whose natural gas patents led to a military ionosphere-research station in Alaska. The station, known as the High Frequency Active Auroral Research Program, is infamous among conspiracy theorists, who claim that the government uses it to cause superstorms.

David M. Hardy, a representative of the FBI’s Records Management Division, replied in a letter on July 24 that the agency had “potentially” kept files on Eastlund.

The FBI would not confirm or deny that the records existed, but in an ironic twist, Hardy said they might have been destroyed by the kind of superstorm conspiracy theorists warned about.

Due to damage from Hurricane Sandy, Hardy wrote, “we are unable to determine if, or when, these records will be available for review.”

The website MuckRock.com, which automates the Freedom of Information request process for journalists, has received enough responses citing Hurricane Sandy that cofounder Michael Morisy decided to submit a request specifically about the storm’s impact on record keeping. The FBI has yet to respond.

“There have been some requests where I thought ‘this should be at Central Records,’ and I’m wondering why it has anything to do with New York,” Morisy told The Crime Report recently.

One particularly surprising example that Morisy cited was a MuckRock user’s request for records about David Copley, the recently deceased publisher of the San Diego Union-Tribune.

The FBI also referenced Sandy in its responses to MuckRock requests on topics such as: the writer Gore Vidal, the novel Fifty Shades of Grey, Boy Scouts of America, and Project PM, a website founded by indicted former hacker Barret Brown.

“It’s frustrating that a storm has really wiped out a wide range of records,” said Morisy, who has also reported for the Boston Globe and the New England Center for Investigative Journalism.

“The FBI’s archiving system always seems so behind the times.”

But when it comes to storing paper files, often dating back decades, government agencies do what most people do, said Susan Long, director of Syracuse University’s Transactional Records Access Clearinghouse.

They keep files in the basement.

Long said that means flooding is a persistent threat to recordkeeping.

She recalled the problems her department had in accessing Internal Revenue Service files in 2006, after a flood left five feet of water in the agency’s basement.

“In the end they were able to locate some things, but they were incomplete,” Long said.

“And there were some (files) that no longer existed, but what are you going to do? They don’t exist.”

Graham Kates is deputy managing editor of The Crime Report. He welcomes comments from readers. He can be found on Twitter @GrahamKates.