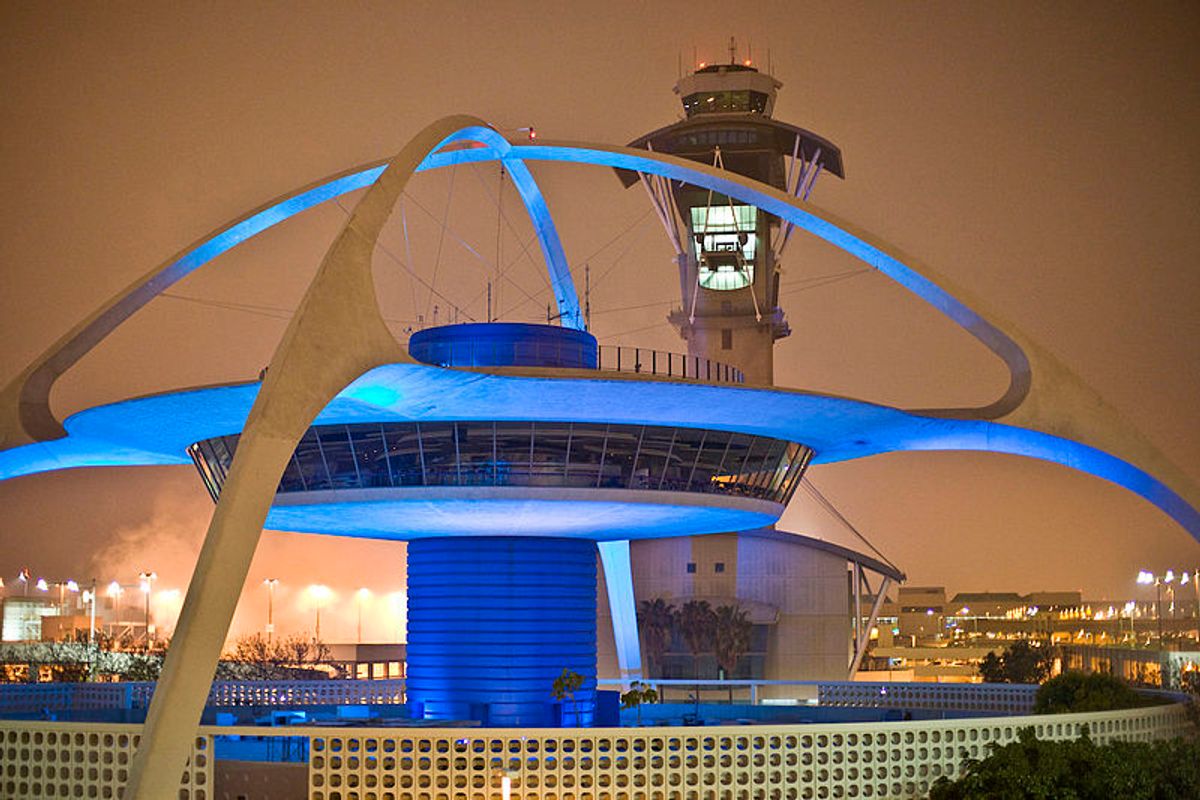 UPDATED, 4:46 pm EST:  According to the AP, the suspect was carrying a bag containing a hand-written note that said he "wanted to kill TSA and pigs."

UPDATED, 4:26 pm EST: The L.A. Times' earlier report that the gunman has died has been retracted: He is reportedly in critical condition.

UPDATED, 3:54 pm EST: NBC News is reporting that the shooting suspect is believed to be Paul Anthony Ciancia, 23, who lives in the Los Angeles area.

The same report suggested that the suspect was carrying writing materials that point to anti-government views.

UPDATED, 3:43 pm EST: Despite earlier reports, officials don’t believe the gunman has ever worked for TSA. A federal law enforcement official said, the L.A. Times reports, that the gunman was a ticketed passenger entering the airport.

A new report from the L.A. coroner's office confirms that deceased victim was a Hispanic male in his late thirties.

UPDATED, 3:16 pm EST: An eyewitness speaking on MSNBC says that the shooter asked him if he was a TSA employee. When he responded, "no," the gunman moved on.

UPDATED, 3:10 pm EST: The chief of airport police said unman "got back very far into the terminal."

UPDATED, 3:02 pm EST: According to latest hospital tallies, seven people have been treated following the incident.

UPDATED, 3:00 pm EST:  In a press conference the LAPD's Patrick Cannon said that the shooter pulled an assault rifle from a bag, opened fire, proceeded past a TSA checkpoint and continued shooting.

Gannon commented that the suspect appeared to be a "lone shooter."

UPDATED, 2:45 pm EST: The L.A. Times is now confirming, based on law enforcement sources, that the gunman was indeed an LAX employee. Some news sources are hearing reports to the contrary, however. Again: the situation remains murky at this early stage.

UPDATED, 2:37 pm EST: The Los Angeles Times, citing law enforcement, reports that the gunman has died from wounds in police custody. All we now at this time was that the shooter is believed to be a U.S. citizen in his early twenties.

"No details about how he died were available. Law enforcement sources said investigators were trying to determine whether the gunman worked at LAX," noted the Times.

Of the wounded victims currently at UCLA medical center, one man is in critical condition, two other men in "fair condition.'

UPDATED, 2:30 pm EST: A number of news sources are reporting that the gunman used an AR-15 semi-automatic rifle.

UPDATED, 2:10 pm EST: According to sources speaking to CBS News, the gunman is believed to be an off-duty TSA agent.

UPDATED, 1:50 pm EST: One TSA agent has reportedly been killed in the incident -- it is not clear whether shot by the gunman or in crossfire. Another agent and one other individual reportedly injured by gunfire. "A federal law enforcement official said that a TSA officer was shot and killed at a passenger screening checkpoint," the Los Angeles Times noted.

Reports that former NSA chief Michael Hayden was a shooting victim have been discredited as a Twitter hoax.

This tweeted image is speculated to show the gunman's rifle, guarded on the ground after the shooting:

UPDATED, 1:35 pm EST: Via the Los Angeles Times: "The LAPD would confirm only that two people were injured and that the suspect was in custody. LAPD Commander Andy Smith said "multiple shootings" occurred and that officers are still sorting out how many people were hurt."

UPDATED, 1:15 pm EST: Reports from KTLA suggest police have detained the suspect and are holding him on roof on Terminal 2's parking structure.

No flights are arriving or departing the airport. The president has been briefed, the White House announced.

An eyewitness told NBC that the man looked like a "younger man", wearing a blue flannel shirt.

UPDATED: Latest reports suggest that there were only two shooting victims -- the TSA agent and the shooter himself. The active shooting situation has ended.

Reportedly, a man carrying a rifle got through security at Terminal 3. At least one shot was fired and a TSA employee has been injured, reportedly in the leg.

NBC News reported that there may still be an "active shooter" at the airport with law enforcement at the scene at the time of writing.