The government did drag its feet on AIDS study, but the film's take is perilously close to endorsing pseudoscience 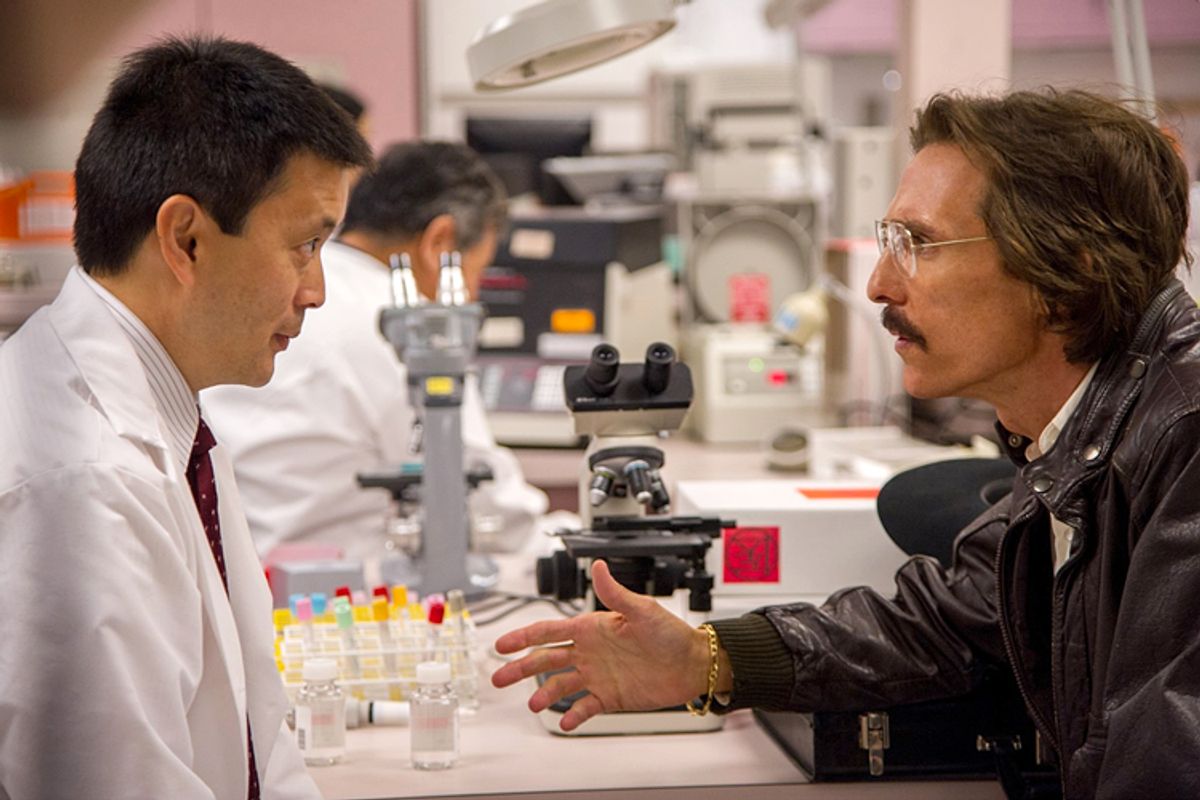 The film "Dallas Buyers Club," opening today, has, perhaps predictably, been tipped for Oscar nominations for its two lead actors, Matthew McConaughey and Jared Leto. Both play AIDS patients in the 1980s who simultaneously fight the disease and the bureaucracy that keeps them from medications for that disease. McConaughey's character starts the "buyers club" that imports all manner of experimental medications into the U.S. as the FDA drags its feet on trials for drugs other than AZT, the one AIDS medication it has approved. The fact that the club the movie chooses to focus on is one run by a straight man with AIDS indicates how carefully "Dallas Buyers Club" curates details to tell an audience-friendly story. Both men are heroic in the extreme, in a manner that's always appealed both to Oscar voters and to moviegoers.

But movies have a way of selectively dealing with reality. By focusing on a discrete period of time in 1986, the film's presentation of the FDA as stonewalling potential breakthroughs may unduly paint the government agency as villainous. There's a whiff of Suzanne Somers-style pseudoscience about the proceedings.

As the journalist David France, director of the documentary "How to Survive a Plague," pointed out to Salon, AZT is not useful taken alone, but was the first element of a cocktail of drugs that ended the era of AIDS-as-death sentence. Characters in "Dallas Buyers Club" rail against AZT as poison and seek to fill their bodies with alternative and in many cases all-natural medicines as the FDA -- very slowly -- attempts to use the scientific method. "'Dallas Buyers Club' ends on a note of real doubt about AZT, and the feeling that the monsters at the door were not interested in doing anything," said France, who has read the film's script. But "AZT was in use until three or four years ago."

Nothing in "Dallas Buyers Club" is wrong, per se, but its focus is so laserlike upon a particular character, and a particular time period, as to create a simplistic impression of a remarkably complicated time. The FDA was not entirely operating in good faith, France believes -- "There was no leap to a sense of urgency, because these people were undesirables" -- and yet the government agency did eventually, after the period the film depicts, become much more nimble in its response to the AIDS epidemic. "With the intercession of activism, the scientific method took much less time," said France.

The activism he describes was not happening in the buyers clubs across the U.S. Indeed, while activists petitioned outside the FDA and worked within it -- a combination of infiltrators and "an outside army of activists who were the stick to their carrot," per France -- the buyers clubs were more focused on bringing hope to the dying. "The buyers clubs imported drugs willy-nilly and gave them to anyone who wanted them. That all made sense. Why not give people an element of hope," said France. But though the film frames McConaughey's character's dispute with the FDA as a defining struggle -- and though it may have been for him -- the buyers clubs came before the turn in attention to working within the FDA, the turn from spreading hope that herbal remedies and the like might halt AIDS to putting the scientific method into practice.

"We try to cast that period into a context that lends itself to policy analysis, but it wasn't a time that lends itself to policy analysis," said Denise McWilliams, who in the 1980s was the director of the AIDS Law Project. The film treats the FDA as wrongheaded and unwilling to consider promising options; a doctor played by Denis O'Hare callously dictates to his colleague (Jennifer Garner) that she must stick with the program even despite her belief that McConaughey's medicines might, maybe, be worth pursuing. Neither she nor he is wrong, exactly; stasis was death, but it wasn't the foreign medications buyers clubs imported that put a stop to AIDS.

Buyers clubs provided hope and a sense of control to people in a truly unimaginable situation. But the movie goes along with that sense of hope -- leaving the viewer in some suspense as to just how long McConaughey will stay alive on his self-styled cocktail so that there can be some drama -- to the degree that the scientific method itself starts to seem untrustworthy.

The delay in expediting trials of AIDS medications was horrible -- and very much of its time, given the Reagan administration's infamous inaction in the face of so much death. But a framing that suggests buyers clubs were the story of the AIDS crisis, the vehicle for scientific progress rather than a tangent to activists forcing real scientists to get to work, is as misleading as a story that positions AIDS as the vehicle by which a straight person learns that gays aren't all bad.