"Boardwalk's" Dr. Narcisse is just one of many refined black criminals on TV now. What's behind the trend? 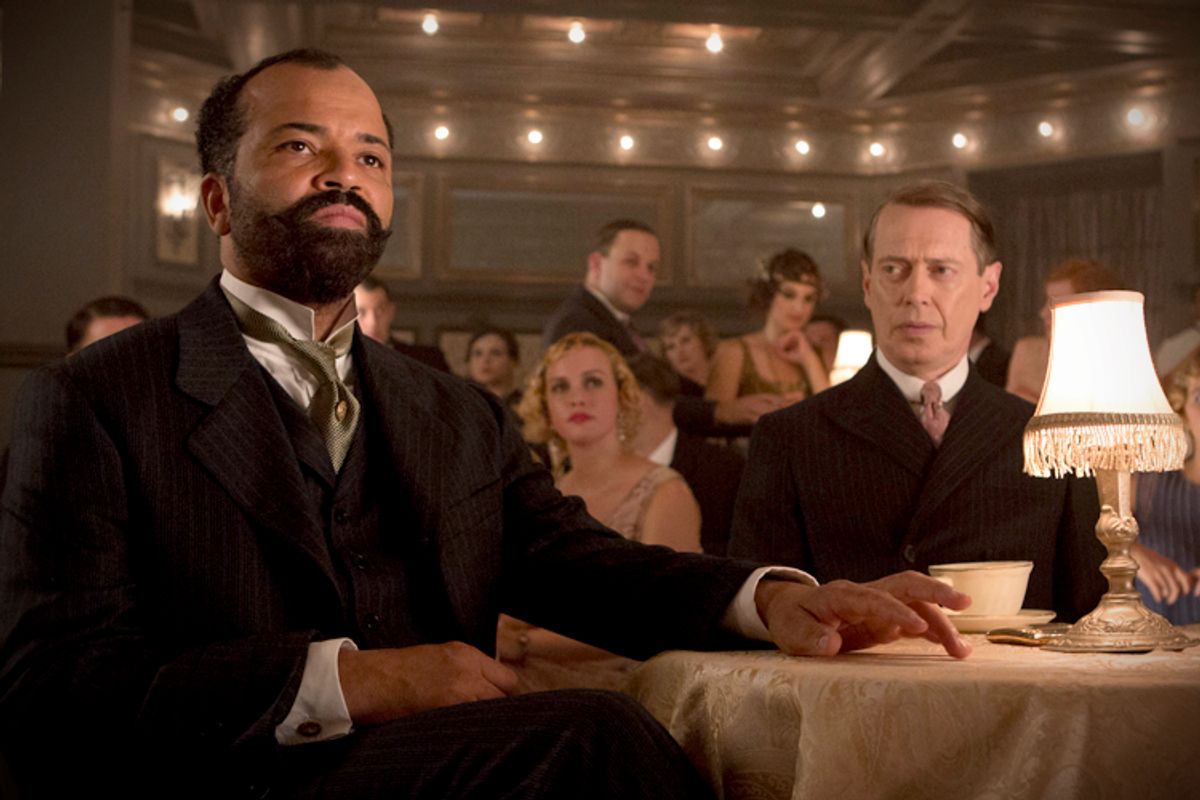 Dr. Valentin Narcisse was an unknown variable when this season of "Boardwalk Empire" began. His name was mentioned, his formidable presence felt, but he remained unseen until the second episode. Even then it was difficult to deduce that the Harlem racketeer was actually a criminal, so refined, so above the fray did he seem. During Episode 3, in one of my favorite scenes of the season so far, Narcisse sits down with the consummate criminal gentleman, Andrew Rothstein. Rothstein, a white, Jewish male, is the show's most untouchable gangster, highly intelligent, extremely calculating -- even his biggest vice is math-based -- and extremely cautious. He never gets his hands dirty. Rothstein and Narcisse are meeting to discuss the latter's purchase of a large portion of heroin from the former when Rothstein insensitively requests payment in large bills only.

"Why would you expect otherwise?" bristles Narcisse. "My understanding [is] you control the local numbers racket," replies Rothstein calmly, used to always being the smartest man in the room. Narcisse, played by the fantastic Jeffrey Wright, fires back gleefully but with purpose, "And therefore I conduct my business like a schoolboy, dealing in pennies, nickels and dimes?" Rothstein relents, "It was not my intention to offend you." Narcisse: "Nevertheless, you succeeded despite yourself."

Dr. Narcisse quickly makes it clear that, as criminals go, he is no less organized than the Jews in New York, the Italians in Chicago, or anyone else conducting illegal business in this world. In addition to being a numbers runner and a burgeoning heroin distributor, Narcisse is also a businessman, a theologian, an educator and a community activist. He is discreet and his affairs diverse. He is also black -- Trinidadian, to be more specific.

Besides being products of the African diaspora, these fictional characters all share similar aspirations. Bell was from "the streets," the aspirational flip side of his unapologetically coarse partner Avon Barksdale. Narcisse is from the islands, his deeper history as yet unrevealed. Fring was born in Chile. And, though his past was also cloudy, it is likely that he was in some way involved in the Pinochet government. Regardless of their backgrounds, all of these successful drug traffickers crave greater legitimacy. Their transactions and affiliations with respected white businessmen, politicians, aristocrats -- even better-insulated criminals -- have led them to believe that the best way forward is to invest in vanilla businesses, not just as fronts but as taxable revenue sources with which to build a legacy and for which they cannot necessarily be jailed indefinitely.

To that end, Stringer Bell opened a copy center and took business classes when he wasn't keeping street corner upstarts in check. Fring owned and ran a chain of fast food restaurants. Dr. Narcisse oversees traveling nightclub acts while motivating young men in Harlem to embrace responsibility and strive to uplift the race. (The irony is delicious.) On "The Good Wife," the reputable firm of Lockhart Gardner represents and consults on all of Lemond Bishop's various and numerous legitimate enterprises, its attorneys constantly fearing that his more questionable affairs will become a concern.

These hustlers are not anomalies. They are merely following the blueprint of organized crime -- at least as we all know it from popular fiction: invest, diversify, insulate oneself against discovery and prosecution, amass greater wealth through ventures that can be broached in broad daylight rather than discussed in the cellar with the radio blasting. Tony Soprano had the Bada Bing. Walter White opened the car wash. The gun-running, drug-smuggling Sons of Anarchy operate a garage and recently expanded into the (relatively) tame porn industry. Even Bill Henrickson, whose only crime was polygamy, invested in a casino to give his extra-large family greater security.

The notion that Bell, Narcisse and the others come across as unusual has to do entirely with race. Black characters, while disproportionately portrayed as criminals in television and film, are far less frequently depicted as being organized, calculating, discreet criminals with ambitions beyond an immediate score. It would be pointless -- and quite possibly ridiculous -- to overstate this development in the context of the struggle for racial equality and declare this as some sort of progress. But it does feel new and raises questions about the trend's origins.

At first, I wondered if it might be a reaction to the relatively more erratic thug image as perpetuated throughout the '90s by hip-hop music and culture. On television, this is most clearly illustrated weekly by police procedurals on which a new and ineffectual low-level drug dealer or mugger lurking about to some anonymous rap score is snatched up and shaken down for exposition by some surly, dogged cop or another. However, this connection actually belies the message in a lot of the most crime-oriented hip-hop lyrics now and going back as far as I can remember. That message is, come up -- regardless of your origins, whether you're from the 'hood or the projects, start your own record label, create a clothing line, launch an energy drink. The goal is, ultimately, to legitimize.

This idea is even more prevalent now than it ever was. Think Jay-Z: Early on, the guy was never shy about his illicit past. Then came the Nets, the president, and Picasso, baby. So perhaps, the sophisticated, diversified hustler is not a reaction to hip-hop, but rather the natural result of one of its core tenets. Of course, this is all conjecture. It would only be slightly more theoretical to suggest that these articulate, ambitious black men -- especially Narcisse who doubles as a community organizer -- are somehow a skewed reflection of the ascendancy of a black president. (Yes, I toyed with this idea.) Isolating the causes behind this trend is as fraught with uncertainty as labeling it a trend.

In the end, though, the best possible cause may be a purely artistic one. It has been reported widely (including by me) that "Boardwalk Empire's" Dr. Narcisse is based on the real-life Harlem hustler Casper Holstein. Creator and executive producer Terence Winter maintains that, in fact, he and his writers devised the character prior to learning of Holstein's existence. So why write Narcisse? The show is already brimming with a colorful collection of white gangsters nesting up and down the East Coast. There was already another black character, Chalky White, a coarse, provincial tough with limited dominion over the black population of Atlantic City. So why introduce this refined alternative with designs on the whole world?

"For us Narcisse was a breath of fresh air," Winter told me, "a way to explore Chalky's world from an entirely new perspective.  In Narcisse, we had a gangster who gave us entree into the worlds of politics, jazz and race relations, both in Atlantic City and Harlem.  A quasi-religious figure who was full of contradictions, a man every bit as zealous in his quest to become a criminal  kingpin as he was in his desire to uplift his race.   As storytellers, my writers and I found him irresistible."

I like to think herein lies the most likely reason for the emergence of this new character type -- the Sophisticated Black Gangster -- into the public consciousness. Experimenting with different characters of every race, orientation, configuration simply opens up the possibilities for broader, more interesting storytelling. Though he may be a villain of the worst ilk -- a hypocrite and a murderer -- Dr. Valentin Narcisse is, as Winter says, a breath of fresh air. Until someone greenlights a show about Casper Holstein as a compelling and conflicted antihero in the vein of Anthony Soprano, the slick, sophisticated Narcisse will certainly suffice.