I gunned my Daddymobile around the Las Vegas Motor Speedway at 85 mph. It was so much better than driving to Costco 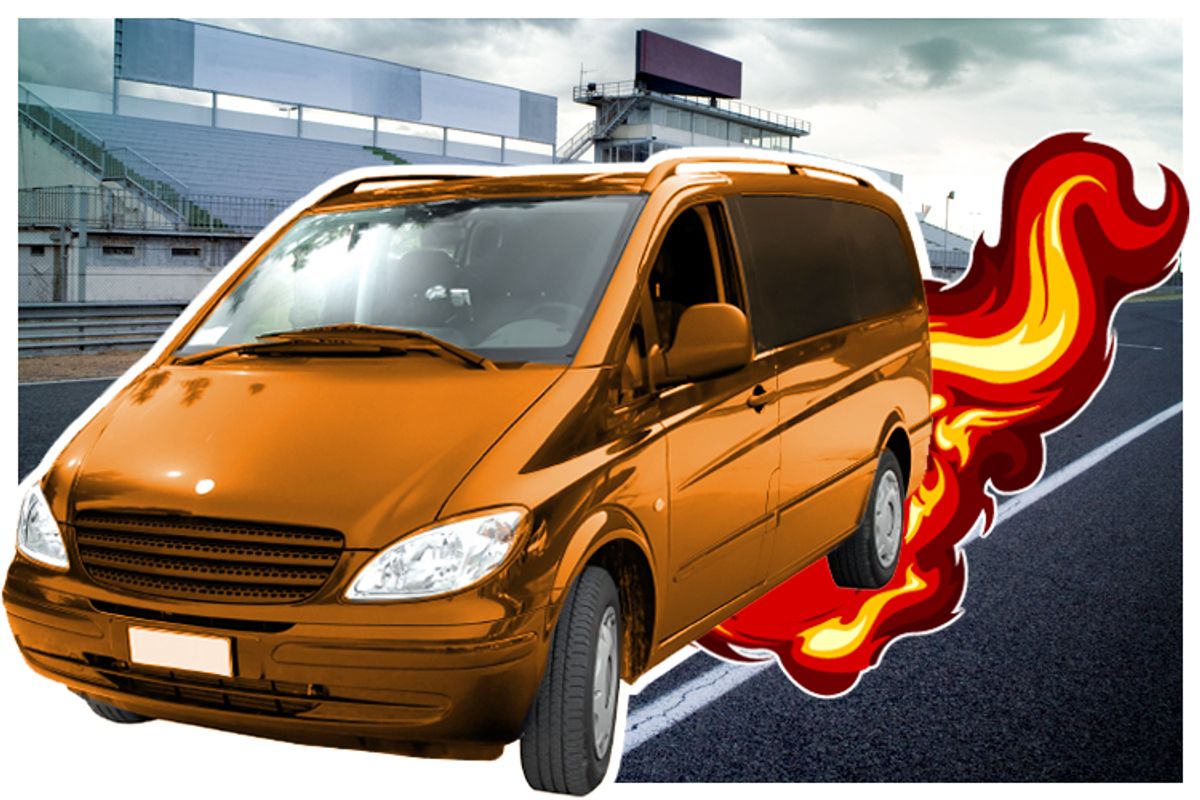 On the road from couplehood to fatherhood, my minivan has taken me places I never dreamed I would go: Chuck E. Cheese's; the pediatric ear, nose and throat clinic; flag football and figure skating (all on the same day). But now, in a promising turn of events, I've added a new destination to my list: the Las Vegas Motor Speedway, where I gunned it with a G-force that sent my innards from the cockpit to the collapsible third row of seats.  It was way cooler than driving to Costco.

Bringing together the words "minivan" and "Vegas" was the bold brainstorm of the folks who make the Toyota Sienna I've dorkishly driven around suburbia for years. Clearly deranged, they thought it would be fun to round up a bunch of dads and let us take turns joy-riding their latest models at 85 miles an hour, careening around nine hairpin turns and an 1,100-foot straightaway normally reserved for vehicles that don't display window decals of annoying, stick-figure families.  This was their way of showing us that minivans are macho -- a conviction that I, for one, could really get behind.  Surveying the fleet of souped-up SEs that awaited us on the racetrack, I couldn't help imagining how badass they'd look back home in the carpool lane. Mesh and chrome front grills, rear spoilers, 6-spoke gunmetal alloy wheels. The only thing missing were Harley flames for the remote-control doors.

"Gone are the days when minivans were one in a long series of compromises men had to make when we started our families," a hip-looking marketing guy told us (with a perfectly straight face). "Once you get behind the wheel, you'll be surprised at what these babies can do."

As an early adopter, I already knew what these babies could do, as I often merge my own onto Interstate 95 at velocities that showcase its 266-horsepower V6 engine. Note to wife: I only do this when the kids are not present in the automobile. When they are, I know something else these babies can do: prevent sibling rivalry from escalating into sibling homicide. Comfortably reclining in their La-Z-Boy "captains chairs," their muddy cleats up on foot rests (yeah, you read that right), they're as quiet as mice. Mice who have wireless headphones strapped on their mouse ears so they can hear the movie they're watching on the built-in DVD player I swore I'd never buy them. You wanna talk about the long series of compromises men make when they start families? Trust me, I know.

One thing I didn't know, however, was how to maneuver my manly Daddyvan on the Las Vegas Motor Speedway. Our training began at the on-site "simulator room" of Dream Racing, an afternoon fantasy camp for the kind of guys who waited in line to see Rush on opening night.  Granted, those guys get their fantasies fulfilled by racing Ferraris instead of minivans, but, hey, a car's a car, right?

Our instructor, a former Formula One pro named Enrico Bertaggia, began by sitting each of us dads down at the wheel of our own simulator -- pedals on the floor, high-def racetrack projected on a screen in front of us. It was pretty much your basic Chuck E. Cheese race-car game, except this one should have come with a Dramamine. I experienced actual motion sickness (and simulated fire-engulfed death) before we even got outside to the track. Calmly, Enrico repeated the basics of racing, each of which sounded more counterintuitive than the next: "Accelerate into the turns instead of braking"; "use as much of the track as possible";  "relax."  As we headed out to the blazing hot track, wearing jumpsuits, head socks and helmets, he offered one last bit of advice: "Don't wreck the cars."

The surprising news is that I didn't. But that's just because my helmet came equipped with an earphone, and the earphone was connected to a microphone, and the microphone was attached to a coach who was fearlessly seated shotgun in the minivan he was making me drive at 85 miles an hour. OK, "making me" is too strong. Let's say, "encouraging me." And if I had to describe how it felt going full-throttle in a car the size of an aircraft carrier, a few words come to mind. Words such as "petrifying"; "chilling"; "sphincter-tightening."

Which is to say, it felt mind-blowing. It felt exactly the opposite of how it usually  feels to be driving around in a minivan: like one in a long series of compromises men have to make when we start our families.

So listen to me, my fellow fathers. Before we start shopping for some convertible midlife crisis car to show the world we're still studs even though we have juice box stains on our sleeves, let's not forget what I learned in Las Vegas: Size matters. Any schmoe can drive a Maserati, but it takes balls to man a minivan.

Dan Zevin is the author of "Dan Gets a Minivan: Life at the Intersection of Dude and Dad," which won the 2013 Thurber Prize for American Humor. His other books include "The Day I Turned Uncool: Confessions of a Reluctant Grownup.