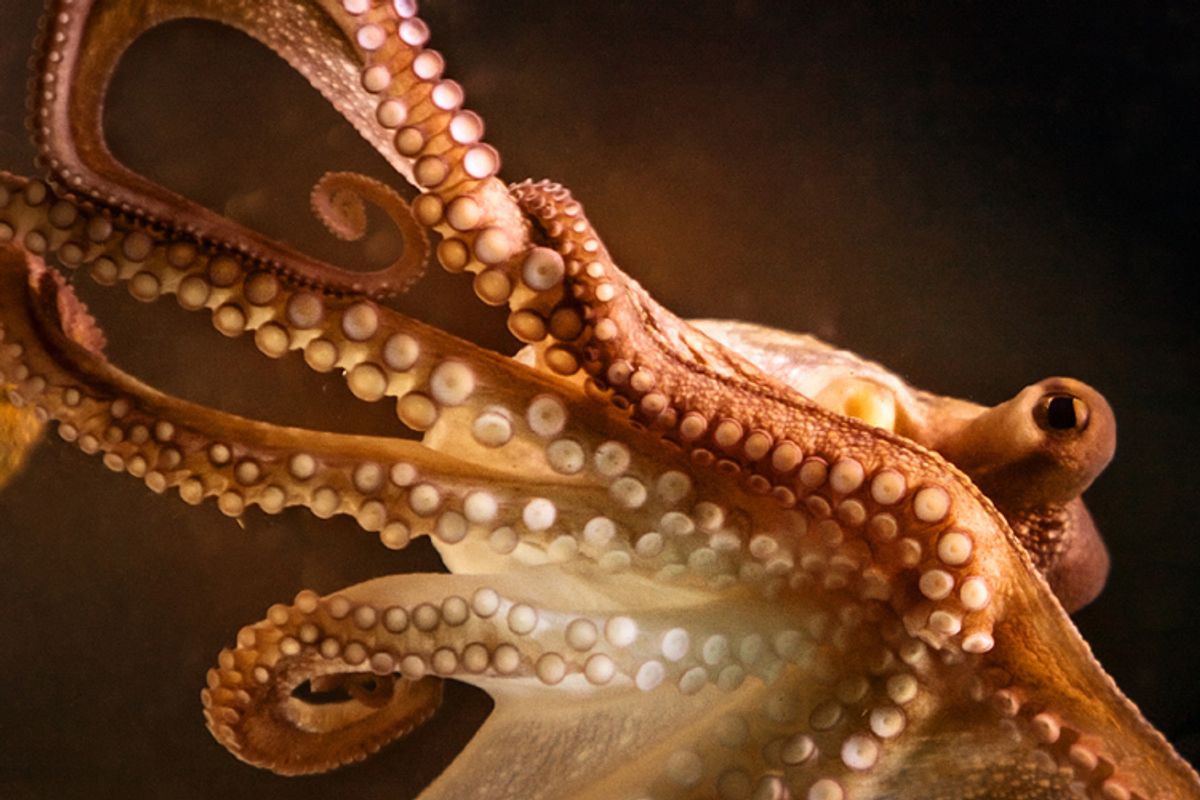 Octopuses, the eight-armed mysteries of the deep, are the smartest of invertebrates and, in the opinion of journalist Katherine Harmon Courage, among the most fascinating animals, period. There's enough that we're still trying to figure out about their larger-than-life personalities, uncanny intelligence and ability to disappear in plain sight to fill an entire book -- as Courage has done in "Octopus!". The book follows Courage as she delves into the wide world of octopus research -- and cuisine -- to try and figure out what it is about the sea creature that so captures the imagination.

"Everybody asks, once you’ve been working on a book for a while, 'Well aren’t you tired of it?'” Courage told Salon. "And I’m like 'No, I could never actually be tired of talking about octopuses or learning about them.'"

Courage spoke to Salon about her boundless enthusiasm for the cephalopods and some of the many things humans can learn from them, along with some mysteries that seem as if they may never be solved. This interview has been edited for length and clarity.

Here's the question I'm sure you get all the time: Why the octopus?

My obsession really started a few years ago. There was a study that came out that showed them using coconut shell halves as tools, and there was video, so I blogged about it for Scientific American. I was a reporter at the time, and ever since then I’ve just been totally fascinated, because it’s just amazing. They’re these crazy invertebrates that are using tools somehow -- they’re not social, so how are they figuring this out individually? It’s pretty remarkable.

You still blog about octopuses for Scientific American. What kind of responses do you get? Is there more interest than you would have thought?

Yes! I mean, I always kind of thought that they were really fascinating, and then once I started working on the book I was totally blown away -- and still, even after having written a book I learn something new every day, and it’s incredibly amazing. But anyway, people just come out of the woodwork to say they’re so excited because they just love octopuses, it’s their favorite animal, they’ve loved them forever… it’s just really cool that everybody seems to have a secret fascination with or obsession with octopuses.

They seem so removed from us, and yet kind of easy to anthropomorphize…

I think that’s one of the big scientific lessons that we have to learn from them: that there’s this big intelligence there. They interact with us and look at us and kind of examine us -- one researcher actually likened it to a dog. Your dog will look at you and engage with you in a way that most animals don’t, and octopuses will do the same, which is just really weird because we’re used to dogs that live and work with us, but octopuses are not social and they’ve been living in the ocean for hundreds of millions of years. So the question of why they can engage with us that way is really interesting.

Do people keep them as pets, or is it mostly just researchers who have discovered this kind of thing?

That’s a good question. Some people do keep them as pets. They’re not great pets, unfortunately, because they’re pretty sensitive to water conditions, and also because they don’t live very long. It’s the tragedy of the octopus, because they’re so smart and people do bond with them -- even keepers and researchers. But most of the laboratory octopuses will only live for maybe a year or so.

That’s what everybody told me when I started researching the book, actually: ”Oh, you have to get a pet octopus!” I looked into it briefly and it just probably is not a good idea.

When you say they’re smart, is that just for invertebrates? Or is there a case to be made for them being one of the more intelligent animals?

I would say definitely the latter. I think they are one of the more intelligent animals on the planet, at least that we know about. Of course, they probably are the smartest invertebrates, at least by our definition. Researchers who study their intelligence will place them in with the birds -- some birds can use tools and some aren’t as quick. Octopuses really hold their own against vertebrates.

But they’re not actually psychic, right?

As far as we know, but I don’t know if they’ve been testing them on that. They can do mazes and open bottles.

I guess it’s just another one of those mysteries.

There’s some dissonance in the book between all these anecdotes about how smart they are, interspersed with descriptions of how delicious they are.

Did you have any trouble reconciling that?

I have to say, I strategized. I tried to front-load my research with the culinary aspect, and then do the more in-depth biology and intelligence stuff later so I wouldn’t feel too guilty after learning it. I have to say, it’s been a while since I’ve eaten any octopus.

At the end of interviews, I would ask researchers who studied them, kind of cautiously, if they ever eat them. And, actually, most would say, “Yes, here’s my favorite recipe.” But that’s not all the researchers. A lot of them won’t even touch cephalopods, won’t have any calamari or anything.

It can make you wonder where their greatest value lies -- as cuisine, or as something to be studied?

Right, exactly. And it’s interesting, when I was in Greece, looking at the cultural and culinary sides of things, and I would explain to people, “Oh, I’m writing a book about octopuses.” And it seemed so boring to them because they have octopuses hanging out all over the street drying. They’re like “Why would you want to write about that? It’s just food!” Even in New York, it’s still kind of an exotic dish, or people are intrigued by it, while here people have been catching and eating them their whole life and it’s kind of an essential, fundamental element of their cuisine.

What would you say are some of the biggest misconceptions in the popular imagination about octopuses?

Other than them possibly being psychic, I think one of the things is that there are a lot of stories and legends about them being these kind of large, malicious sea creatures. They don’t actually get that big -- the big ones are the squid. An octopus can get pretty big, but they’re not going to pull down a boat, that’s for sure. And they’re not -- I mean, they’ll obviously fight back if they get attacked, but mostly they’re just very curious. So, divers will sometimes have trouble with them, because the octopus will come up and check out their regulator or suction off their mask, which can be dangerous, but the octopus isn’t really trying to kill them. It’s just curious, just checking out this other animal that’s in its area.

So what’s their situation in the wild? Are they one of the populations we have to be worried about preserving? Are they endangered in any way?

That’s actually another one of the big mysteries of octopuses -- we have no idea how many there are out in the ocean. They’re just really hard to track because they’re solitary and they live in these secretive dens. So unlike fish, where we can kind of cast out a net and put out cages and study the populations over time or even tag them with radio transmitters, we can’t do any of that with octopuses. People estimate their populations by how much the fishermen are bringing in, so that can change wildly based on climatic conditions and other factors affecting ocean life.

A lot of places aren’t well-regulated, like the Philippines or off the coast of Africa, where a lot of octopuses are coming from today. So they are worried about their populations out there. And I think the key is regulating how many octopuses can be caught and which ones, because people often catch the little ones. If they haven’t had time to reproduce, then that’s a problem, obviously, for that population moving forward.

Aside from them just being cool and tasting good, in the book you get at some of the bigger things we can learn from them, that make them worth keeping around.

Absolutely. There are a lot of different aspects that researchers are pursuing. Of course, there’s the intelligence question. They have a lot to teach us about how we think about intelligence, because in an octopus two-thirds of its neurons are in its arms. So what’s it like to be an octopus, where not all of your intelligence is concentrated in your central brain?

Then their skin can blend perfectly into the background in milliseconds…

You reference this amazing video in the book:

Yeah, so crazy! Obviously the military is interested in developing that kind of advanced camouflage, so it’s funding research with nanotechnology researchers and other engineers to try to develop these sensors that can change color and light instantaneously.

On the robotic side too, there are different labs trying to build soft-bodied robot octopuses, which are cool, but they also have a lot of promise for developing more advanced robots that aren’t just hard components, and are developing the intelligence to go along with that. You can teach a robot with a stiff arm to move it up and down, but if a robot has an arm that moves in an infinite number of directions, figuring out how to control that is a big challenge.

So do you have one favorite octopus fact that you learned?

I think one of the most amazing things to me was that on top of the camouflage, they can use their changing skin to do other bizarre things. I don’t know if you saw this passage in the book, but they can create what they call a passing cloud display. So if they’re hunting, say, a crab, the crab will freeze if it senses it’s being pursued because it doesn’t want to attract more attention, and the octopus kind of loses track of where it is. The octopus will hold still and then create this light patch on its body, and on the light patch will be this dark cloud that kind of moves around -- it’ll startle the crab so it starts moving, and then the octopus can find the crab and smash it up, which is totally amazing to me.

I did see that -- once you start looking at the book it’s kind of just cool story after cool story.

And that’s what was almost frustrating about writing the book, because you only have so much space and they’re such cool animals! That’s why I’m glad I have the blog -- so I can keep researching and keep adding stuff that didn’t make it in.

Two other misconceptions: the plural of octopus [it's "octopuses"], and what the limbs are called ["arms," not "legs]. But hopefully I got that out there early in the book.

I’d say that’s the most important thing I learned.