Sheryl Sandberg: "Men need to do more childcare and housework" 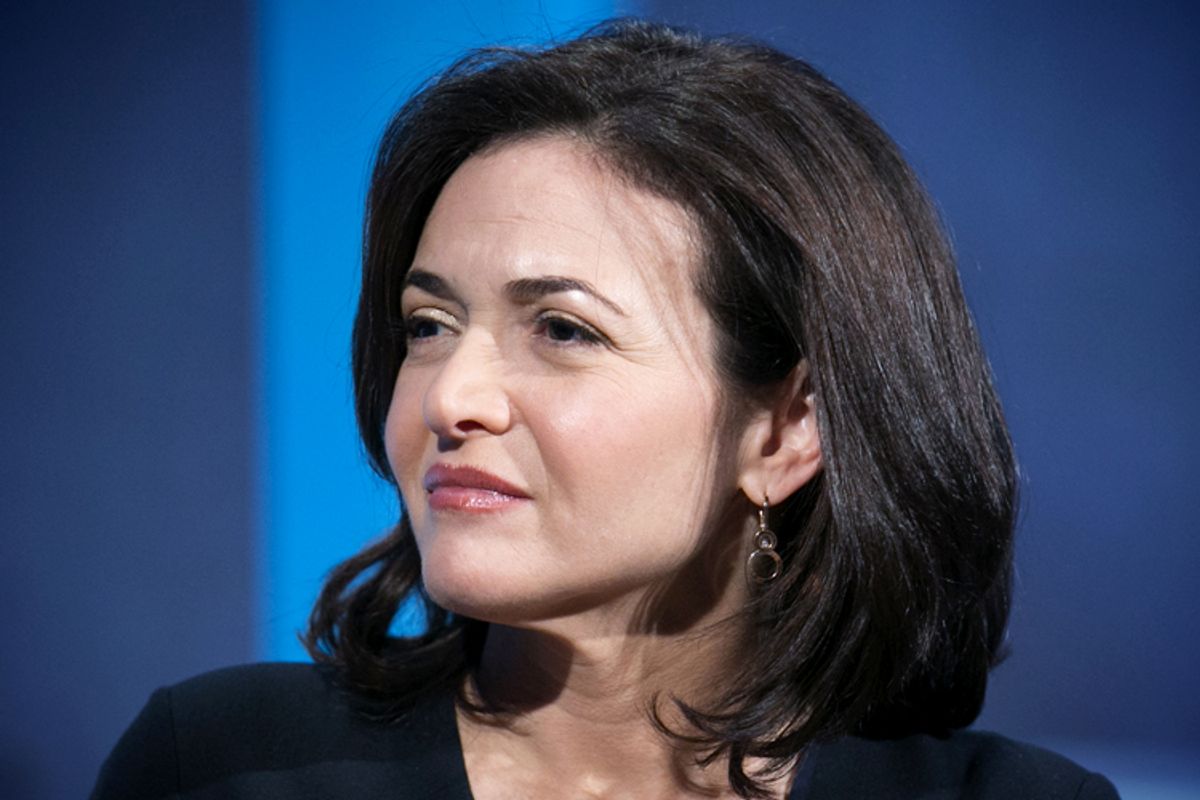 Excerpted from "What Will It Take to Make a Woman President?"

For her new book, "What Will It Take to Make a Woman President?," veteran journalist Marianne Schnall interviewed high-achieving women about why the highest glass ceiling in the land is still in place. The following is taken from her talk with Sheryl Sandberg, Facebook's chief operating officer.

Marianne Schnall: Why do you think it is that we’ve not had a woman president so far?

Sheryl Sandberg: I have a great story for you. There’s a song that has all the names of the presidents, and so my kids were learning the names of all the presidents and my daughter, at four, looked at me, and her first question was, “Mommy, why are they all boys?”

MS: What can we do to change that?

SS: It starts young. Girls are discouraged from leading at an early age. The word “bossy” is largely applied to girls, not boys. I think we need to expect and encourage our girls and women to lead and contribute. And I think we are so focused on supporting what we call “choice,” that we don’t mean real choice. When we say choice, we mean women get to choose to work or have families. We don’t mean men choose to work or have families. Real choice would mean that people were choosing based on their interests and personal passions, not based on their gender.

MS: There is also the impact of how we treat women leaders. For example, some of the sexist commentary when Hillary was running, or some of the comments that are always made about women leaders like Nancy Pelosi. When women are in positions of power, or seen as confident or ambitious, they’re often portrayed as unlikable.

MS: Where is the entry for change? Is it in the media? Is it in our educational systems? Where can we fix some of these problems?

SS: It’s the classic chicken-and-egg problem. We need more women leaders to show more women they can lead ... and we need to show more women they can lead to get more women leaders. I think the first thing we need to do is decide that the status quo is not okay. When I say women have been 15 percent or 16 percent of the leadership in corporate America for ten years and it hasn’t moved, people are astonished: “Really? It hasn’t moved in ten years? We’ve stopped making progress?”
So the first thing is acknowledging there is a problem and deciding we want it to get better. In our society, we don’t talk about gender, at all. I don’t understand how you fix a problem if you can’t acknowledge you have one.

MS: One of the things in particular that I think affects the political sphere—in terms of the dearth of women running for office—is the fact that it’s such a hostile, mud-slinging experience where candidates are subjected to so much criticism. Do you think that’s part of the reason that sometimes women are deterred from entering politics, because women are less likely to want to subject themselves to that?

SS: Yes, but also because women are less liked by running. It is all self-reinforcing, all of which we can change. I really believe we can change it. I think the dialogue on whether or not women can do it—can we have it all—is incredibly harmful. We need to recognize that we can’t do it all, that we face trade-offs every single minute of the day. We have to stop beating ourselves up for not doing everything perfectly.

MS: What I think is so important about what you bring into the whole equation is the connection between a woman’s personal and family life, just the realities of balancing that and how that impacts this whole conversation. How do you see the influence of gender roles? Some of this is not just specific to women, but it involves men changing their gender roles as well, yet we rarely talk about it.

SS: I know. I think that is a problem. We are stuck in our gender-specific roles and so it’s just reinforcing. In my book, Lean In, I tell the story of my friend Sharon. She said that her daughter went to school, she was seven or something, and she was introducing her parents. She said, “This is Steve. He builds buildings and he loves to sing. This is Sharon,” and she shows pictures of her parents, “She works full time. She wrote a book, and she never picks me up.” Steve never picks her up! Sharon picks her up more than Steve, but that’s what kids see.

I wrote a lot in my book about being identified as Facebook’s female COO, and I actually did a Google search for “Facebook’s male CEO” and there are no results, zero. I don’t wake up in the morning and say, “What am I going to do today as Facebook’s female COO?” But that is how I’m viewed by the world. I wrote at the end of my book, it’s one of my favorite lines in the whole book, “One day there won’t be ‘female.’” The word “female,” when inserted in front of something, is always with a note of surprise. Female COO, female pilot, female surgeon—as if the gender implies surprise, which it does. I am a female leader. One day there won’t be female leaders. There will just be leaders. I personally think it’s a numbers game. I basically think the system is broken and there are all kinds of institutional barriers, but if we can get enough women into jobs like yours and jobs like mine, that changes.

MS: There are a lot of generalizations out there that women are more collaborative and less confrontational. Do you agree with that? Why is this important? Not just as a fairness thing, but why do you think it’s important that we make equality a priority, and what would women bring to the table that you think Washington and the world needs most now?

SS: There’s been a lot written about what the world would be like with more women [leaders]. My view is that if all the players play, that creates more competition, and more records get broken. I just think we would perform better as a society. Plus, I want to live in a more equal world.

MS: You have worked in Washington as the chief of staff for the United States Treasury Department. What was that experience like, being a woman working in Washington?

SS: You know, I’m forty-three now. I was only thirty at the time I worked in Washington. At the time, the more senior people were men and the more junior people were women, but that was going to change as my generation progressed. And that, for me, has been the biggest disappointment: that it hasn’t changed nearly as much as I hoped it would.

MS: Are you seeing progress? Certainly in this last election, it did seem like everybody was talking about women, and women did break some records in terms of representation. Do you think that something has happened and there’s a shift?

SS: I think there has to be a shift, because you can’t win elections just with Caucasian men anymore. You have to have minorities and women. The numbers just don’t work anymore. So I think there will be a shift. But the women have to run in order to get elected. And right now, they are less inclined to do so.

MS: What generally are some of the most concrete and constructive changes that we can do as a culture, or a society, to improve things for women to become leaders in the political and corporate spheres?

MS: Do you think there is also a problem about not only getting women into leadership positions, but once they are there, making sure women are emboldened to trust their own natural wisdom and instincts, so we’re not just perpetuating old paradigms of power and leadership? Because I think sometimes part of the problem is that women try to do it in a way that’s not authentic to them.

SS: I don’t think it’s that women try to do it in ways that are inauthentic. I think we don’t have a basic construct of women in leadership. It goes against what we expect of women, which I think is the basis of the problem.

MS: I think we also need to encourage women to honor and value their own vision and thoughts, to make sure they know that they have something unique and valuable to offer the world. How did you do it? How did you tap into your own inner leader to give you the courage to follow your calling and speak out?

MS: In terms of the type of leader that you are at Facebook, what have you learned being a manager of men and women? What ingredients do you try to instill in your own leadership in terms of managing your employees?

SS: I try to teach people about the likability penalty women pay for success, so when they hear, “Oh, this woman’s doing a good job, but she’s just not well liked by her peers,” they have enough sense to question that and ask why. I talk to people about the value of talking about gender, because what’s happening is women are not navigating through their careers or learning the ways they can stay in and lean in, and we have to change that. I think both male and female managers need to be able to talk to female employees about this. It’s not easy. These are complicated things for people in companies to do, saying, “Are you thinking about having a child? We should talk about it.” A lot of the legal advice everyone gets is to never mention it. Well, never mentioning it is not going to solve a problem. So I talk to people about being very explicit about it.

MS: There are also obviously policies that corporations and Washington could implement that could make it more family friendly—helpful policies that employers can do on their end, whether it’s maternity leave, parental leave, or some other policy.

SS: I think all of those policies are really important. I think equal maternity and paternity leave are hugely important. How are we going to teach men to be equals if the average woman takes three months and the average man takes two weeks? People forget that there’s a huge gap in our coverage.

MS: Do you feel hopeful that in your lifetime that we will have a woman president? Does that sound like something that is possible?

SS: I’m hopeful that Hillary’s going to be that woman.

Excerpted from "What Will It Take to Make a Woman President? Conversations About Women, Leadership and Power," by Marianne Schnall. With permission from Seal Press, a member of the Perseus Books Group. Copyright 2013.