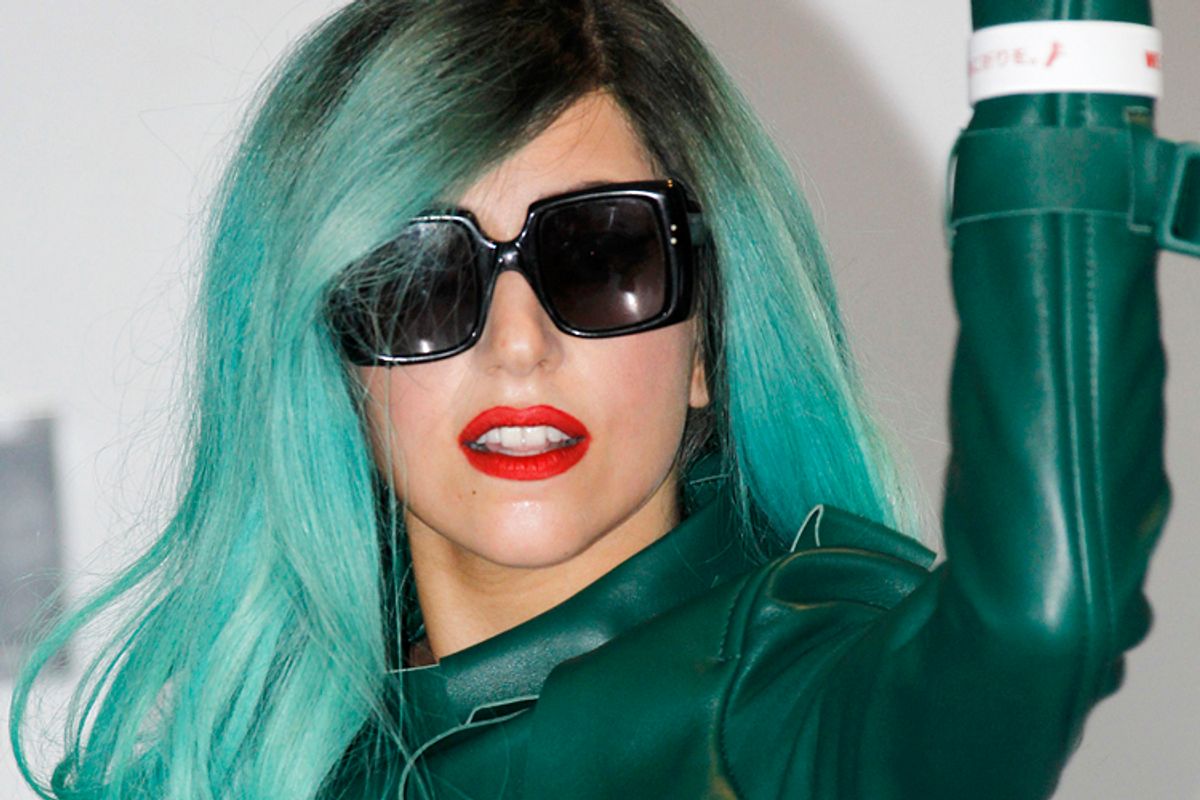 How many times does Lady Gaga need to come out to us? Gaga first opened up to Barbara Walters about her sexuality in 2009, revealing that “Poker Face” was written about her attraction to women. According to Gaga, she’s had sex with both men and women, and in a recent interview with Andy Cohen, she joked about “taking a few dips in the lady pond.” As a queer person, Lady Gaga gets to define her sexuality however she chooses, and she’s repeatedly labeled herself as bisexual.

However, Gaga’s pronouncements about her orientation tend to be forgotten about or outright dismissed as a ploy to gain acceptance with an LGBTQ fanbase. The out singer addressed her critics last week during a question and answer session at Berlin’s Berghain Club, while promoting her forthcoming album, ARTPOP. The singer sounded off: “You know what? It's not a lie that I am bisexual and I like women, and anyone that wants to twist this into ‘she says she's bisexual for marketing,’ this is a fucking lie. This is who I am and who I have always been.”

The sentiments here recall the singer’s lyrics in “Born This Way,” reminding LGBTQ youth that their sexuality wasn’t a mistake. They were born to be the people they are. At the time, though, the media framed Gaga’s pronouncements as a message of allyship rather than a chronicle of lived experience. No matter what she does, Gaga’s musical activism gets billed as the work of an outsider, not someone who is a part of the community. Bilerico’s Amy Andre reminds us that gay musicians like Elton John don’t have to face the same scrutiny, and the out singer has never been billed as an ally. He gets full privileges as a member.

This reflects a culture where bisexuals are too often erased in the LGBTQ community, despite contributing one of the letters to the acronym. Because Gaga is currently dating a man ("Chicago Fire’s" Taylor Kinney) and doesn’t present a butch identity, her sexuality is rendered all but invisible. Anna Paquin is likewise married to her "True Blood" co-star Stephen Moyer, but being married to a man doesn’t negate her sexuality. The actress came out as bisexual in a PSA in 2010 to address the stigmas around bisexuality. “It’s not being greedy or numerous other ignorant things I’ve heard at this point,” Paquin told Zooey Magazine. “For a bisexual, it’s not about gender. That’s not the deciding factor for who they’re attracted to.”

Paquin’s message wasn’t just that bisexual people exist, but that they have relationships just like other people do, except that they have more options. But as someone who identifies as queer, bisexual or pansexual, I disagree with her contentions on the issue of gender. Statements like these frame bisexuals as somehow above attraction, as if genitals weren’t a concern, but sex and gender will always be a part of the equation. Writing about Paquin for "In Our Words," bisexual writer Raechel T. hit the nail on the head: “I am consistently attracted to masculinity. Whether that masculinity takes shape in a cisgender man, a woman, or a transman, makes no difference.”

As Raechel reminds us, the disparity between how she and Paquin define their sexualities only illustrates the many ways one can be queer. “Being queer looks really different for everyone,” Raechel T. writes. Despite my identification, I haven’t pursued a woman in years, simply because I’m not read as available to most women I know. I dress and live flamboyantly, hoping that my queerness can be seen from space, and the need to qualify my sexuality is a constant barrier to entry. Even if you’ve been out as bisexual since what feels like the dawn of time, it’s often assumed that you’re lying, harboring internalized homophobia or making your way toward homosexuality. This is nothing but a “phase” you’re going through -- just a really long one, I guess.

Biphobia manifests in a number of different ways in the LGBTQ community, where getting into a heterosexual relationship is a form of betrayal. My last girlfriend was an oddity and a curiosity amongst my friends, as if I were the gay best friend she just happened to be dating, and her friends assumed we were dating for the threesomes. Such stigmas and misconceptions around bisexuality are so rampant that I don’t often disclose my sexuality to the partners I date. If I feel comfortable “coming out” to them, sometimes it’s a non-issue, as if I were telling them I had blue eyes. However, it’s more often than not a dealbreaker. A guy I was dating once told me that he “could never date a bi guy,” because he felt like he could never be enough for him. A bi guy would always want something more.

I’ve also heard that bisexuality is a “hippie new age affectation” and a “cheat,” as if you only have to come out halfway -- but bisexuals will have to continue coming out for the rest of their lives. They will have to repeatedly explain themselves, which can be exhausting when you have to deal with prejudice both outside your community and from the people you expect to support you. Unfortunately, this won’t be the last time that Gaga will have to remind us that she’s bisexual, fighting for her place in the spectrum. Lady Gaga belongs in the LGBTQ community, waving a flag alongside the rest of us. It’s biphobia that needs to be erased.