America's anti-Greenwald hypocrisy: Is the New York Times a "terrorist," too?

The UK government has just done to Glenn Greenwald's partner what the U.S. often condemns authoritarian regimes for 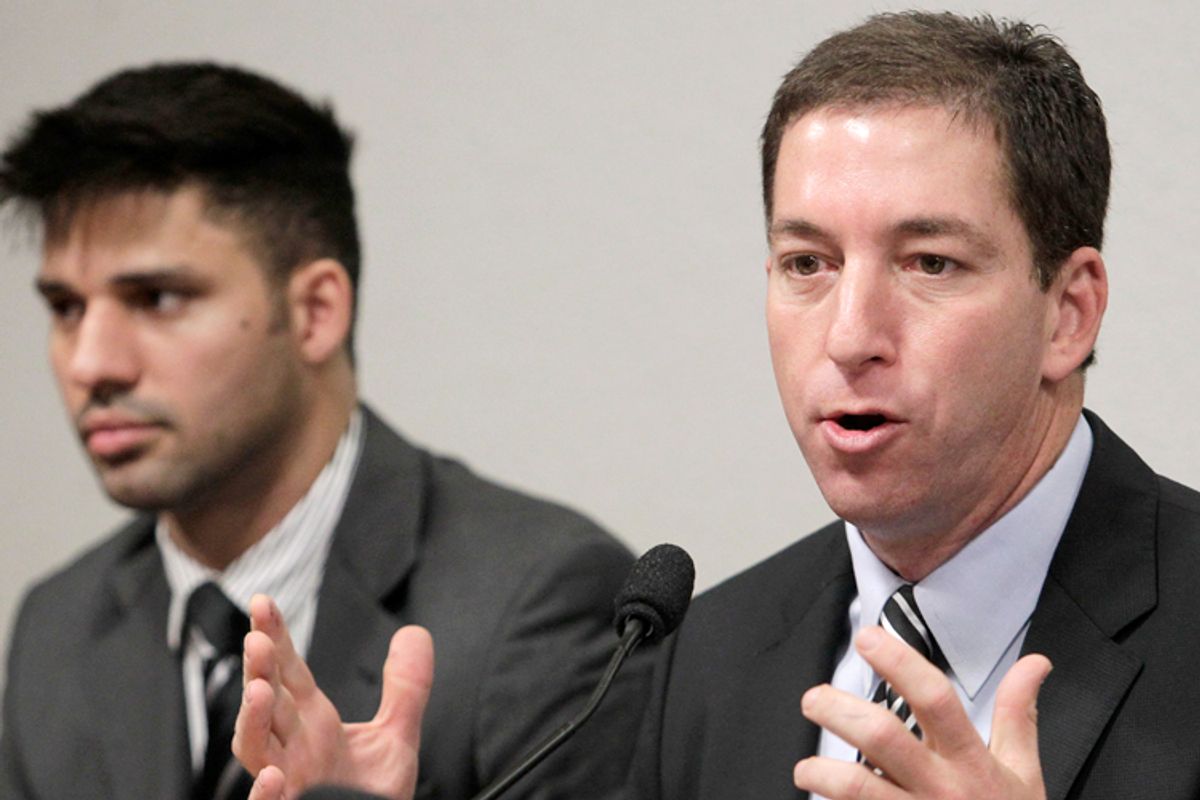 This post originally appeared on the web site of the Freedom of the Press Foundation.

In a shocking court filing this week, the U.K. government accused journalist Glenn Greenwald’s partner, David Miranda, of “terrorism” for allegedly transporting leaked (and heavily encrypted) NSA documents from documentarian Laura Poitras in Germany to Greenwald in Brazil, on a journalistic mission paid for by the Guardian newspaper.

In a statement that should send chills down the spine of every reporter, the government made the unbelievable claim that merely publishing information that has nothing to do with violence still “falls within the definition of terrorism.”

"Additionally the disclosure, or threat of disclosure, is designed to influence a government and is made for the purpose of promoting a political or ideological cause. This therefore falls within the definition of terrorism..."

Think about the sheer breadth of that statement. Not only are several Guardian reporters and editors also guilty of engaging in “terrorism” under the U.K. government’s logic, but so are New York Times or ProPublica journalists who have received the same news-worthy documents for publication. If publishing or threatening to publish information for the purpose of “promoting a political or ideological cause” is "terrorism," then the U.K. government can lock up every major newspaper editorial board that dares write any opinion that strays from the official government line.

No matter one’s opinion on the NSA, the entire public should be disturbed by this attack on journalism. In fact, this is exactly the type of attack on press freedom the U.S. State Department regularly condemns in authoritarian countries, and we call on it to do the same in this case.

For example, in January 2012, in response to Ethiopia jailing award-winning journalist Eskinder Nega, the State Department expressed “concern that the application of anti-terrorism laws can sometimes undermine freedom of expression and independent media.” Again in June State Department released a statement saying, “The Ethiopian government has used the Anti-Terrorism Proclamation to jail journalists and opposition party members for peacefully exercising their freedoms of expression and association.”

The 2012 State Department human rights report on Turkey criticizes the country for imprisoning “scores of journalists … most charged under anti-terror laws or for connections to an illegal organization.”

In April 2013, the State Department cited Burundi for imprisoning radio journalist Hassan Ruvakuki and three of his colleagues for “acts of terrorism.”

Just last month, in response to respected Moroccan journalist Ali Anouzla being arrested under an anti-terror law for linking to a YouTube video, the State Department said, “We are concerned with the government of Morocco’s decision to charge Mr. Anouzla. We support freedom of expression and of the press, as we say all the time, universal rights that are an indispensable part of any society.”

As the Committee to Protect Journalists noted in its excellent report on the misuse of terror laws, “The number of journalists jailed worldwide hit 232 in 2012, 132 of whom were held on anti-terror or other national security charges. Both are records in the 22 years CPJ has documented imprisonments.”

Warping “terrorism” laws to suppress journalism is the hallmark of authoritarian regimes and deserves to be condemned by all. The Miranda case is a classic example of, as the State Department has put it, “misus[ing] terrorism laws to prosecute and imprison journalists.”

The State Department should apply the same principle it's applied to these authoritarian regimes and condemn the U.K. for misusing its “terrorism” laws to suppress journalism and free expression.