Moving in with polyamorists 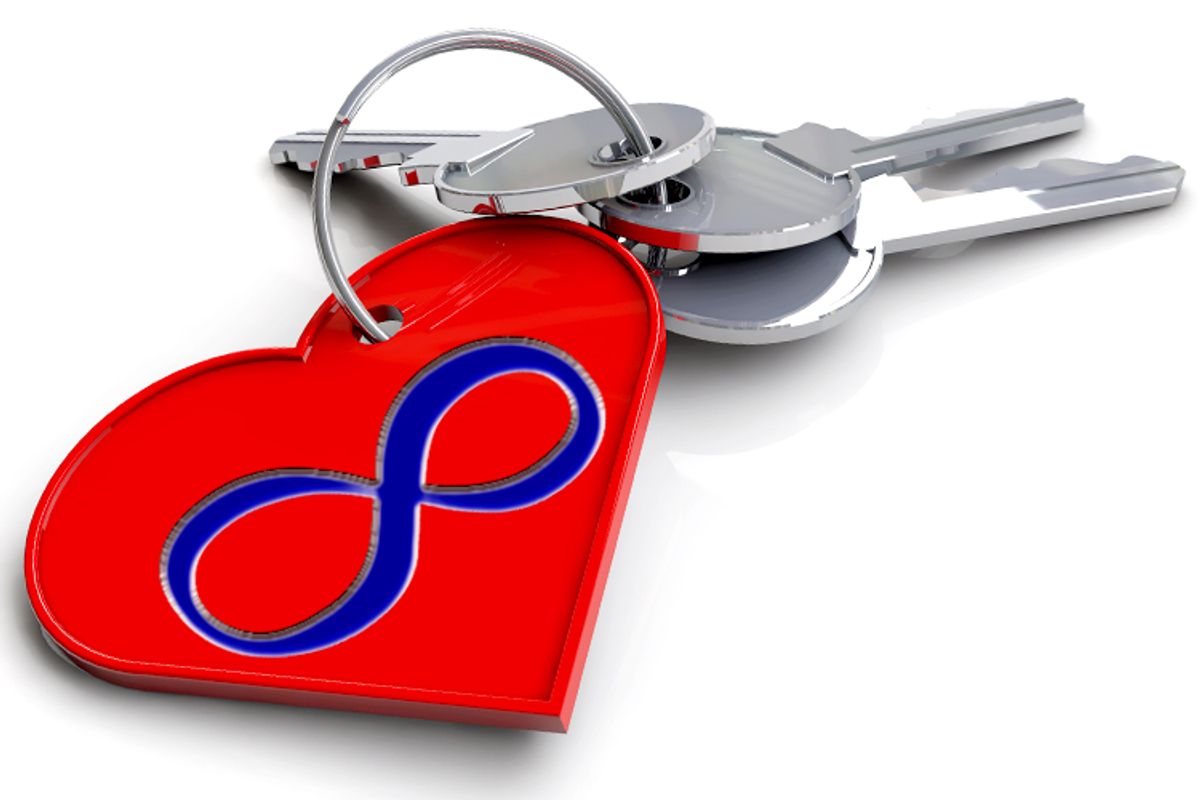 Three things happened the year we lost our love. We got married, we went bankrupt and we moved into a house with a polyamorous family.

I’d like to trace it back to one event, say definitively "it was moving into the poly house!" when the dropped stitches started to appear. It would be easy to blame the cracks in a monogamous relationship on proximity to friends committed to loving more than one person. But just as gay marriage probably isn’t the reason for your divorce, polyamory wasn’t the reason for our problems. By then we’d been broke and bickering and living in a van for three months, the romanticism of our itinerant life frozen by a bitter Pacific winter. By the time we limped into the home of our friends -- the only ones who’d offer us shelter when the cold and the van became too much -- we were already so deep into a knotted pattern that we either had to unpick completely and start again, or continue and pretend the holes weren’t getting bigger.

We kept on going.

We argued through Christmas and the van shuddered into the New Year, where it, like me, promptly collapsed. By February, at a loss about what to do, we moved the van into the backyard of our friends’ home. We became a newly married monogamous couple, living with a polyamorous family in their new home.

In the face of our distressed and suffering love, living with a family who had committed to loving more than one person was not challenging to our monogamy and commitment to each other; it was simply a depressing example that we were, both of us, malfunctioning beings incapable of any relationship that wasn’t incredibly painful. It reminded us daily that we were failing at love. Here we were, just two people, struggling to communicate and make it work, and yet we were living with a family of four who put daily, exhaustive effort into making their relationships with each other and their multiple other partners work.

Caroline was in a committed relationship with Laura, and also with Mike, a transgender male. Allegra was married to David, but was also in a committed relationship with Laura. But Allegra was insecure about David’s secondary relationships, and so David’s primary partner remained Allegra and he didn’t, like her, have a secondary partner, although, with her consent and presence, they could occasionally have casual sex with another couple to spice things up. And then there were the other members of the family who did not live in the house: Laura’s partner Jonas, who lived in Oregon with his wife Mary, and Caroline’s partner Dean, who was touring the country as a drummer in an indie band.

So many misperceive polyamory as either "cheating" or free love -- some strange kind of permissive, boundaryless no-man’s land where curious sex-mad creatures can suck and fuck and screw and lick whomever they choose, without repudiation from their "committed" partners. In reality, polyamory is the practice of loving more than one person at a time, with the consent and agreement of all partners involved. It’s the polar opposite of "cheating" -- it involves an incredible amount of introspection, self study and communication skills. And free love? Love is never free. Love always comes with the promise of pain. It’s merely asking yourself, seriously, whether the pain is, in the end, worth it.

Our daily existence, which had become punctuated by crying and arguments shivering in a freezing van in the mountains of Topanga Canyon, took on a new tone as we became sucked into the practical daily chores of the house: gardening, cooking, cleaning and participating in a larger community than just us two. We’d wake up in the morning, the man and me, untangle each other from twisted sheets on the cramped futon we shared, wander out of the tiny spare room we’d been loaned, crammed with books and clothes and college papers, into the kitchen for coffee, and find four people, still in their pajamas, deep in a long and involved discussion over whether Laura should continue seeing Jonas, and whether her ambivalence toward their relationship was a sign that it was over, or that she was suffering from PTSD after a recent bereavement.

The man and I would watch and feel quietly ashamed that our efforts to communicate were shrill, giddy, high-pitched and panicked, that unlike the hours of calm, often emotional, discussion which our friends patiently devoted to their love, we tried to plaster over the cracks of our pain with mutually silent pleasure: the joy of eating sushi without resorting to crying, the achievement in watching a movie together without hurting the other, getting through an entire day without a personal Chernobyl.

“Do you think it would help our relationship if we were poly?” I asked the man once, about a month after we’d moved in, after another fight. “Maybe we wouldn’t have a chance to hurt each other so much if we had two other lovers as well.” He looked sad. “Having more people involved wouldn’t fix our problems, it would just distract us. I don’t want anyone else. I only want you.”

I felt the same.

Polyamory directly challenges institutions that we hold dear: sexual fidelity and monogamy, the ownership we feel over one another’s bodies. To poly folks, compersion trumps propriety: the notion that your partner’s pleasure and happiness is just as important as your own. This is why poly folks must directly confront jealousy on a regular basis: a partner might, at any given time, request to have a relationship with someone who is not you. Compersion means asking yourself if you truly believe that a relationship with another person might benefit your partner. Of course, compersion isn’t limited to sex. Compersion means directly challenging your own assumptions and plans for your partner. Compersion meant that I had to question whether my desire for my own home and stability trumped the man’s desire to live in a van, always challenging the norms of society.

I felt often, that we -- the boring, married couple with our dysfunctional arguments and inadequate communication methods -- were like zoo animals to our poly friends. Allegra would question us deeply about our monogamy, curious as to how and why two people might only want to be with each other when it was so obviously painful for both of us. David would launch into a long and complicated evangelizing argument about why everyone should be poly, and why poly was the "better" way. Laura would yell at us to “challenge our monogamy!” whenever we became too couply -- meaning, not stop sleeping with each other and choose other partners, but avoid the insular and isolating conversations we would have without choosing to invite other people into our discussions. No one had ever been interested in why we argued before. Living in a poly house, it was required that we share our thoughts and our feelings, however shameful and disgusting they felt.

When we talk about trust in the here and now, the 21st century, our minds always flee to sex, the ability of a person to give another human being the power to harm them through a physical act of intimacy. We trust that this betrayal will not happen, and the physical act of sex becomes the marker by which we judge someone’s loyalty to our love, as if betrayal is only something that happens between the mouth and the genitals.

But our mistrust -- me and the man’s -- was never about whether we loved one another, whether or not there might be contenders for our love, whether or not we wanted to fuck anyone else. It rarely is. Our mistrust was about whether either of us two selfish beings could ever be happy with the necessary concessions and hard work and disappointments and small victories and tiny, intimate pleasures that forging a life together brings. Our mistrust was forged from the suspicion that we weren’t quite the same people we’d fallen in love with. We may not have had airbrushed wedding pictures, but in our minds we’d created idealized versions of the other, photoshopped reality into romantic, sepia-tinted memories of us two as lone rangers, Hunter S. Thompson figures with American Spirits dripping ash out of our mouths as we drove along the Pacific Coast Highway in a battered VW surf-van. We weren’t sure if the other would still like us, never mind love us, when the rain stopped falling and the music stopped playing.

After three months in the house, I left my husband for several weeks while I worked abroad in Afghanistan. I was five weeks pregnant at the time, by accident and not design, but I never once worried that while I was away he would break our commitment to our monogamy. What threatened us was simply ourselves and our own love, inadequately defined and hopelessly immature.

When I came back, husband and I left our life shuttling between the spare room and the van in the backyard. We left cleaning toilets and cooking group dinners and tending vegetable gardens and long intense debates about Allegra’s temper or Laura’s apathy. We left drunken conversations until deep into the night, tears, tempers and tantrums. We left laughter, exhaustion and the intricacies of other people, and we rented our own apartment, with enough room for us and the baby and all our unsorted issues to finally stumble out from deep within where they’d been metastasizing or sleeping, we couldn’t tell.

Our interactions with our friends had become tense and awkward by this time, as if the baby, this symbolic creature swimming deep in my uterus, represented something more insidious they could not quite articulate -- a betrayal of some kind, a broken promise the terms of which were murky to all. They never offered to help us move, invited us over a few times, visited us just once, asked us back to a painful and disastrous lunch that only highlighted our new alien status, and then -- prolixity removed, curiosity dampened, written off as just two more people lost to hideous social conventions --  we did not hear from them again. With our tasks and responsibilities for their household relinquished, no one seemed interested in helping us make ours.

We grieved painfully for a long time.

And then, as the baby grew, my husband and I slowly fell back in love.

Ruth Fowler is a British author and screenwriter living in Venice Beach. Her first book, "Girl Undressed," is published by Penguin.