I've hated Card's politics since I interviewed him in 2000. But I love the book, and the movie ruins its story 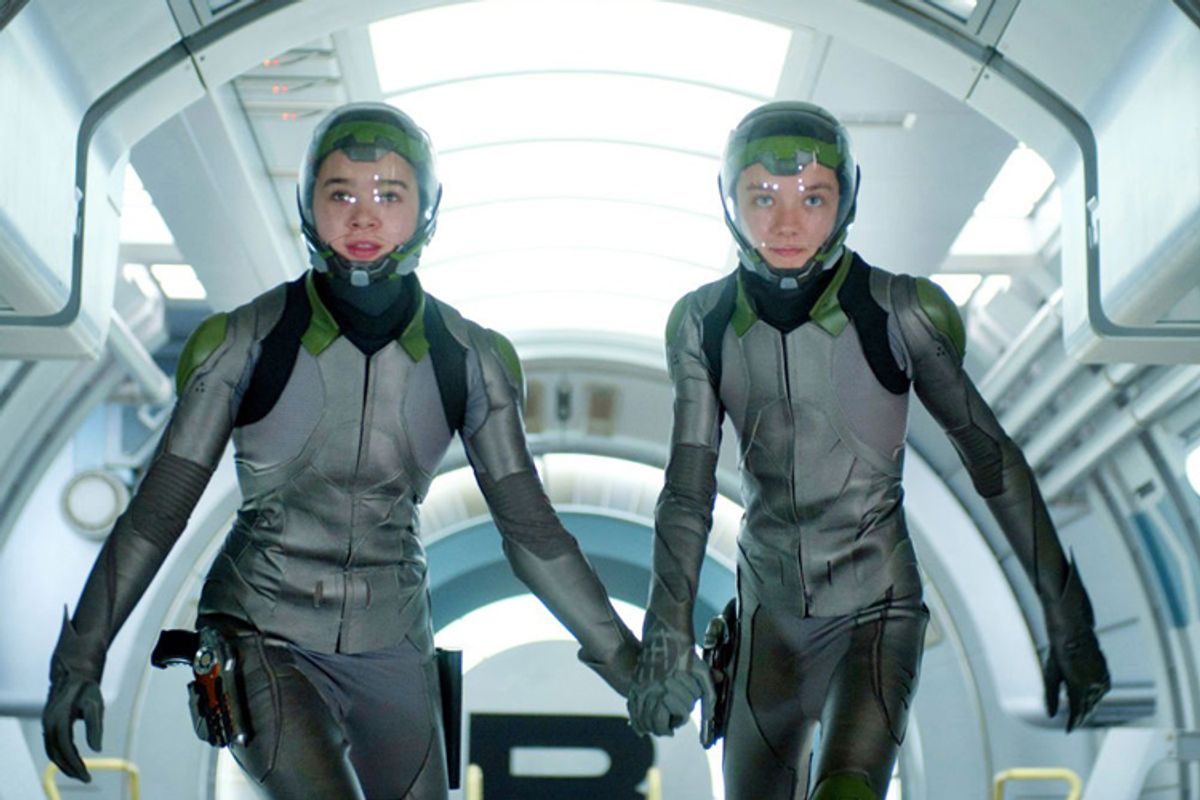 There was one moment in the film "Ender's Game" that made my pulse quicken: early on, when a group of other children are attacking Ender, when he is still in a regular grade-school in the suburbs, not yet translated to the world of small-fry commandos. The children, little boys like Ender, are terrifying, and he will do anything to avoid their punches.

This may have been the only moment in the film that had anything like the emotional acuity of the book, bravely delving into a world that quite small children experience all the time but almost all mass culture ignores: the real, psyche-altering violence many kids experience every day from either other kids or adults.

Unfortunately, Gavin Hood's movie fudges even this scenelet a little, turning the book's threatened and threatening 6-year-olds into 12-year-olds and thereby making the cosmic sense of threat somewhat easier to watch.

When I say mass culture ignores child physical abuse, I don't mean the entertainment-driven, entirely distancing depictions on police procedurals. In most TV and film, the battering of children is at once sensationalized and minimized because it is never shown from a child's perspective: violence against kids becomes a crass horror show, an easy spectacle of outrage and helpless victimhood. The brilliance of "Ender's Game" the book was that it took us right into the experience of a child who is physically abused by his older brother (and other kids), and repeatedly put in danger by adults, often deliberately, who want to use him for their own purposes. What is it like to be such a child? The novel "Ender's Game" knew (I'm assuming here that novels can "know" things their authors, perhaps, can't) that the experience of child physical abuse is common, not singular, and it set out to explore the effect of this early terror and violence on one of its survivors.

The book's author, the terrifying-in-his-own-right anti-gay Obamaphobe Orson Scott Card, acknowledged to me in a 2000 interview in Salon that, like Ender, he himself had been repeatedly hit and threatened as a child by his own older brother (before backtracking and saying he'd only "thought" that he'd been abused). Still, he correctly (and surprisingly) noted the "revolutionary" thrust of his own novel in an introduction he added to the book in 1991, because it "asserts the personhood of children" in a world where few adults do. Neither leftists nor Card's fellow paranoid conservatives - he recently predicted that Obama would send "urban gangs" of "young, out-of-work, urban men" out to beat and even "disappear" hostile journalists - typically put child abuse into any kind of political context, but on this issue, Card is ahead of most of us. "Children," Card wrote, "are a perpetual, self renewing underclass."

Unlike the book, however, the bloated, wooden, exploding-spaceships-obsessed "Ender's Game" movie could not be called "brilliant" or "revolutionary" in any even minimal respect. Halfway into the flick, I finally knew how I felt about the boycott called by Geeks Out!, the staunch group of LGBT nerd/activists who are calling on people to skip the film because of Card's over-the-top hateful homophobic statements, including the claim he made to me in the same interview that gays and lesbians "hurt people" simply by existing.

Here's my vote on the boycott: "Ender's Game" is a big, stinking pile of crap, so you shouldn't see it. If it were a good movie, I would almost certainly tell you the opposite.

But it's not. Let's start with Ender himself: Asa Butterfield's character, at 12, is not only far more innocent than the six-year-old in the book, he is also geekier, and weirdly, friendlier. This Ender is sweet, earnest, and full of scientific factoids, extending his hand and saying hello to the other boys and girls in Battle School, like a pint-sized Sheldon or Leonard from "The Big Bang Theory."

This Ender is helpful, and he doesn't make waves: like a little Marine, he agreeably tells Colonel Graff, "I'll do everything I can to win this war." No such line is uttered in the novel, and it would be absurd to imagine the real Ender saying it, for he, unlike Asa Butterfield's version, is tortured, conflicted, and both furious with and suspicious of the adults, like Graff, who want him to destroy the aliens (whom the movie is too cowardly to call Buggers, which was Card's paradoxically anti-homophobic name for them in the book).

This series of transformations underlines precisely what makes this movie such a giant pile of shit: this "Ender's Game" has been reverse-engineered as a run-of-the-mill wish-fulfillment fantasy of nerd-boys from middle school getting to command space armies and blow stuff up, the very opposite of the novel's thoughtful examination of violence and its link to deep, personal fear. I gagged when I saw real middle school and high school boys in the movie theater grooving on Ender and his pals' blowing up the giant female space bugs, thrilled when they saw Ender and his little friends receive the respect and admiration of adult generals in real time for committing genocide.

And there's the rub. The movie is so fake, so nakedly a bid for the young male dollar, that it completely neglects both the genocide and the child-abuse aspects of the plot. Oh, Ender cries a little the at end when he realizes he's unwittingly (and needlessly) destroyed an entire sentient species, but I don't believe the tears for a minute. They come right after the film's real climax, when five children (they now look around 15) command battleships electronically to excitingly blow up a planet. There is even a girl in the mix, a ridiculously sexual-looking Hailee Steinfeld playing Petra. In the book she's a little girl who ages from 6 to 10, but in this film she becomes a quasi-love interest who holds hands with Ender and maternally helps him learn how to conquer.

The Skip Ender's Game movement is right in one respect: the only purpose of this terribly written, horribly produced film is, as the activists say, to "make money" for Card and the producers. (Yes, The Wrap has reported that Card got his full payout from the project when he inked the deal for this movie back in 2003, so he will not be sharing in box office proceeds, but he still stands to profit enormously from the film's publicity, which has launched his novel to the top of the New York Times bestseller list.) And of course, Lionsgate Entertainment will make scads of money from it, especially if they jim up an entire series of Ender films, based on Card's sometimes beautiful and deep series of Ender books.

I admit I did have a momentary twinge of guilt, plunking down money to buy my ticket for a film for which a boycott had been duly called by some members of my community. (I couldn't make the press screening because of a conflict.) And I'm annoyed by all the press reports that simply say Orson Scott Card "opposes same-sex marriage," without noting that he's actually supported laws criminalizing gay sex. Still, I'd never give up reading Ezra Pound (who did radio broadcasts for Mussolini and wrote anti-Semitic poems), never stop reading William Burroughs, who killed his wife, and, perhaps closer to home, never abandon my beloved Tolkien, who not only spoke up for Franco in his letters but consciously gave his gold-obsessed, ugly little dwarves a "Semitic"-sounding language, and invented mentally-challenged "Wild Men" who read like indigenous Africans and are meant to be ruled by his white, "Western" King.

I believe decisions like this are ultimately personal, arbitrary, and based on something like taste or quite internal emotional responses. After Woody Allen began an affair with (and married) his quasi-adopted daughter, I couldn't watch any more films by him. But that's me. And I can't watch any new Roman Polanski films (though I did enjoy "Rosemary's Baby" before I knew it was by him, and will still grandfather in the film as something to watch).

I don't pretend those predilections of mine arise from a considered political position - they are profoundly personal responses. My position here as an activist, or a critic, is that we'd be culturally impoverished if we prevented ourselves from reading (or watching) all the works of beauty made by artists with revolting politics.

So don't see "Ender's Game." But not because of Orson Scott Card; boycott Gavin Hood.