Holy carp! The Great Lakes are under siege 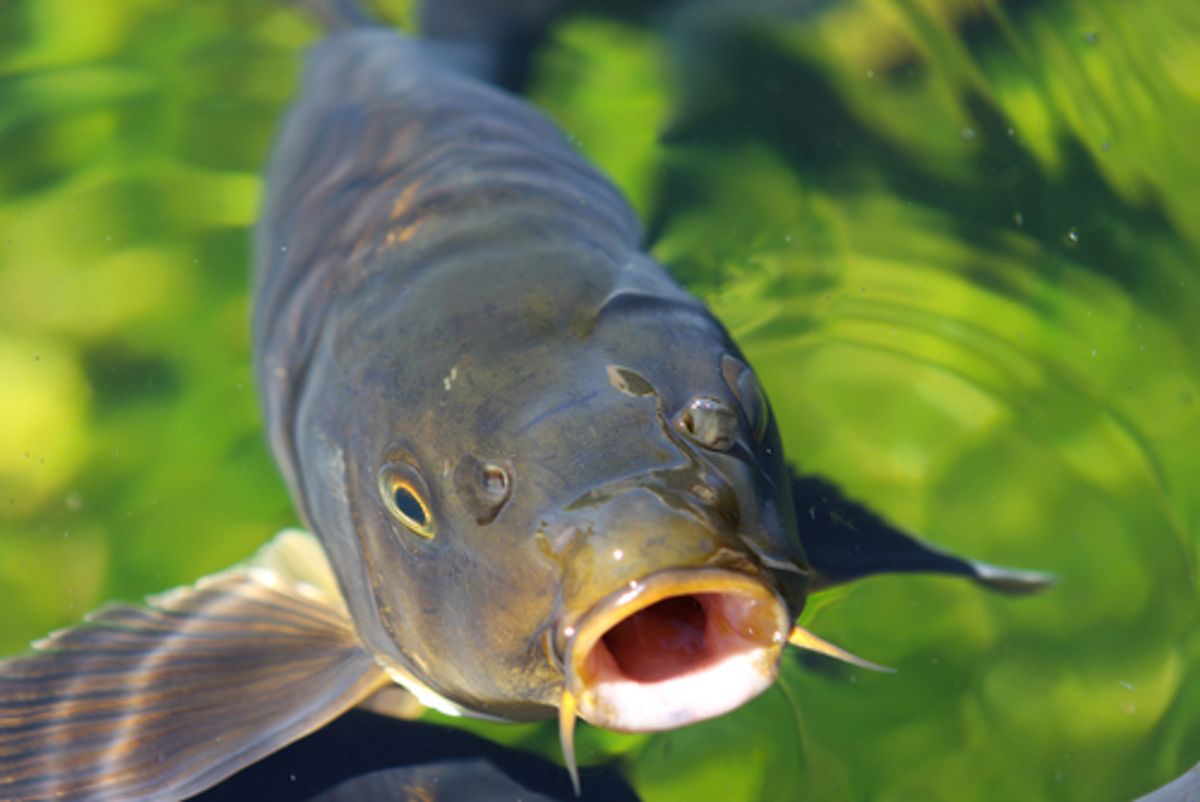 Fifty years ago, the U.S. Fish and Wildlife Service imported a species of Asian carp to Arkansas as part of an initiative to control aquatic plants in reservoirs and fish farms. The foreign fish performed well, and managers in other states adopted the strategy. Unfortunately, an accidental release in 1966 set the invaders loose in the Mississippi River, and they’ve been eating their way north ever since. Today, four species of Asian carp dominate the Mississippi and its tributaries—outcompeting local species for food, disrupting the ecological balance, and even injuring boaters bylaunching themselves into the air like slippery torpedoes.

So it’s decidedly bad news that scientists say at least one species, the grass carp, has now successfully reproduced in the Great Lakes watershed for the first time.

For starters, if grass carp can breed close to or within Lake Erie, its three cousins probably can, too. “Grass carp are a lot less threatening than the bighead and silver carp species that have raised alarm bells,” says Meleah Geertsma, an attorney for NRDC (which publishes OnEarth), “but this news is just the latest sign these resilient invaders require us to take action quickly.”

The fish invasion would be a nightmare for the Great Lakes’ native species, as well as for the many Midwesterners who make a living off of the $7 billion fishing industry. Successful breeding might make it even harder to stop the scaly scourge from overtaking the ecosystem. And oh, how we’ve tried.

The Army Corp of Engineers spent $10 million to erect a 130-foot electric barrier at the Chicago Sanitary and Ship Canal (see “Cry Us a River”) to keep carp out of Lake Michigan. The electricity stuns the fish and prevents them from making their way through the canal. Unfortunately, studies have shown that although the zappers work on big fish, the electric current is less effective on small fry around 2 to 3 inches long. According to the Associated Press, the costs of this and other measures to prevent carp from getting into the Great Lakes total nearly $200 million.

This very expensive problem is one that took us a bit by surprise. You see, these fish weren’t supposed to be able to breed at all. When the government introduced the foreign carp into our environment way back when, it took care to use triploid fish. The term “triploid” refers to a rare chromosomal disorder that results in infertility. Scientists learned they could create triploid fish by shocking eggs in hot or cold water. The thinking went that since triploid grass carp are sterile, they would make great weed-eaters with little environmental liability. Alas, if Jurassic Park has taught us nothing else, it’s that life always finds a way.

Until recently, all the grass carp found in the Great Lakes have been of this sterile variety—which means those fish either escaped from aquaculture farms, which still stock the fish, or had been released, possibly by fishermen using them as bait. Butresearch announced this week revealed that grass carp caught in a tributary of Lake Erie had spent their entire lives in the wild—meaning they were born there, not bred. So, is it time to declare Threat Level Midnight?

“It’s bad news,” says Duane Chapman, a fisheries biologist with the U.S. Geological Survey and a member of the research team. “It would have been a lot easier to control these fish if they'd been limited in the number of places where they could spawn. This makes our job harder. It doesn't make it impossible, but it makes it harder.”

If the fish can breed within a striking distance of Lake Erie, then scientists may have underestimated the number of other tributaries conducive to carp reproduction. The recent findings have enormous strategic implications for the Great Lakes’ Last Stand.

“We need to keep the carp out of out of environments that they haven’t contaminated yet. We need hydrological separation,” says NRDC’s Geertsma, referring to a strategy of constructing physical barriers in order to keep the Great Lakes separated from the surrounding lakes and rivers where carp are already at large. Hydrological separation will require large commitments of time and resources, and so far, the government has resisted calls for more aggressive action.

Perhaps the news of breeding grass carp will be the wake-up call needed to realize current measures are failing, and the time has come to enact a new strategy. Carpe diem, as they say.