My unconventional therapist saved my life

I've seen counselors since I was 6. But I'd never worked with one who was so direct, challenging -- and effective 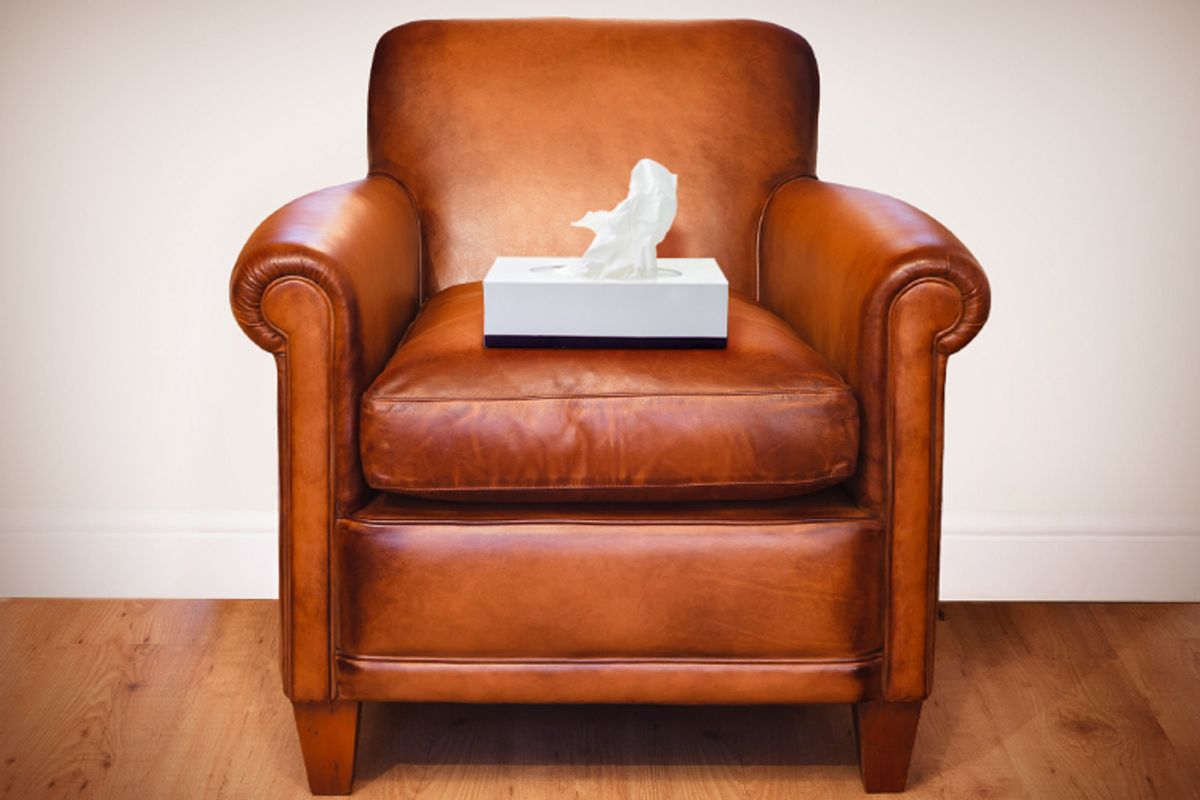 I saw my first cognitive behavioral therapist when I was 6 years old. I was convinced that my mother would die if I let her out of my sight, and each time she left the house (to work, to go to the store, to enjoy the one hour she got to herself doing aerobics at a local school), I attached myself to her like an unyielding barnacle. I kicked and screamed and cried and begged her not to leave my sight. These tantrums began after my parents were an hour late coming home from dinner one night. I imagined their car overturned on a snowy road, dead. I drove the baby sitter wild, howling in my bed, obsessing, throwing up, sure that something disastrous had happened to my parents, without whom I would be completely lost. In those weeks of my hysteria, when my mother did manage to break free of me, I waited by the window like an anxious dog. My mom was alarmed by my behavior, and also felt like a prisoner in her own home.

The therapist I talked with had a lovely rhyming name and lived in Cheyenne, the city nearest our small town in Wyoming. “It sounds like,” she began, and that was the first of thousands of times over the next 30-odd years that I heard this phrase. A series of colored wooden blocks were scattered on a table in front of us, but I don’t remember what they were for, or if I was asked to arrange them into shapes that might reveal something about my state of mind, or if other scenes transpired that might take place on an episode of “Law & Order” when the doctor patiently asks questions to determine the possibility of abuse or trauma.

“It sounds like you feel like the world is an unsafe place,” my first therapist postulated. Yes, that was true. I had lost my leg at 4 to some stupid “fluke” in the body that nobody could adequately explain to me because it couldn’t actually be explained. One day the body was whole, the next day I was in traction and something was missing. Yes, I thought. The world is unsafe. If someone can thieve away with your leg in the dark of night, what’s to stop another thief from taking your mother or anyone else who mattered to you? I wanted an answer to this question. She didn’t have one, of course, because nobody did.

After our session the therapist told me, and then my mother, that I was a perfectionist. At the time, this seemed perfectly acceptable to me. What was wrong with that? Perfection = control = nothing bad will happen to you or anyone you love. I kept seeing this therapist, but she never pushed me out of my ardent belief in this erroneous equation. I don’t blame her. I was 6 years told, stubborn and in full possession (I believed) of a worldview that worked for me. It was my truth. The therapist recommended more sessions, reading more books where “things turn out well,” and periods of calm and rest. I dutifully agreed to the first two suggestions, but I had a library card and a lot of energy, so the others were difficult to enforce.

An attempt to be perfect has been an overriding theme that has resulted in self-destructive behaviors (eating disorders, obsessive exercise, occasional alcohol abuse), unhealthy relationships, and ruinous attitudes about my essential goodness.

I wanted to feel better. I knew this wasn’t a great way to live. So over the years I went to numerous therapists who, through patient and board-certified methods, attempted to shake me from body hatred, anxiety and trauma. When I was a student at Harvard, a therapist tried to teach me deep breathing techniques. (This was before yoga became the default recommendation for mental stress.) When I had a nervous breakdown at 21, I went to a woman who simply repeated the word “relax” for an hour in her living room (there was an unseen fountain trickling softly), and then gave me a tape to listen to at night that repeated the instruction to relax. She also introduced me to Xanax, which was a staple in my life until seven months ago.

Years later, a therapist in Pennsylvania tried tapping my right and left kneecap in a prescribed rhythm, a technique designed to release trauma. It didn’t work. I felt the same old hyper self-loathing, the same old pit of fears that I was ugly and worthless and horrible and unsafe. “Try to open your mind,” she said as she adjusted her chair in front of me, but I could not. These therapists were patient and skilled and had helped other people, but I never took steps to change anything about my attitudes or behaviors, because it was too hard. “Maybe you should try this,” someone might suggest. But I never followed through, and nobody ever held me accountable.

In 2011, a rupture in my life forced me to seek alternative methods. After my son Ronan was diagnosed with a terminal illness at 9 months old, and my second marriage quickly fell apart, I was approaching 40, abjectly miserable, howling with grief, and nothing was helping me. This disease would take my child and there was no way around it, and this was not bearable. I was told by some, and not in a compassionate way, that I was a “crazy person.” While I think going crazy with grief is the appropriate human response to learning that your child will die, it also became clear to me that if I didn’t change particular patterns in my behavior I would not be able to care for my son and I would literally lose my mind. A close friend of mine from divinity school, a woman, a writer and an artist whose intellectual and emotional aptitudes I trusted completely, recommended a therapist whose approaches were both effective and, as I understood, “off the chain.”

I called this therapist – Juliana Jones-Munson – on a frigid afternoon in November, from my car in a Santa Fe parking lot (my Toyota has since become the site of many therapy sessions), and after one hour I had a plan of action. This is what I want you to do, she said, and when she’d make the suggestions included in this plan, none were a surprise. Other therapists had never been as forceful, never asked probing questions and kept asking until I unearthed the truth. She pushed me and held me accountable, and she did so in ways that would most likely not be approved by some licensing boards. Working with her was uncomfortable and painful and it worked.

Over the course of the next two years, through the most challenging period of my life, over a time when I watched my son slowly die a stupid and agonizing death to a horrifyingly rare and devastating illness, I felt deeply sad and wrecked, yes, but I also felt clear and empowered. I did not feel happy, and I was not without panic, but I also felt in control of something crucial: the truth. About my life, about what I wanted, about my marriage, about the mistakes I’d made, about what I could do to choose a different path in the future.

Even during the most terrible days, Juliana reminded me, “You have a beautiful life, and you’re going to keep building a beautiful life.” I believed her. It was by no means a perfect life, which I finally accepted did not exist; it wasn't a controlled or easy life, but it was mine, in all its jagged beauty. As all our lives are. I wasn’t trying to arrive at a prescribed destination where all would be “perfect.” I was only trying to be in my life, to fully live it. Through her guidance (which is not always patient, and I deeply appreciate this), I have been able to grieve, make strong career choices, and build a relationship with a man to whom I can reveal my whole, messy self and trust that I will be loved and accepted, a serious first. I can sit with the loss of Ronan, I can cry and howl and and not feel like these emotions will overtake me.

My therapist never says, “it sounds like.” Instead, she says, “This is what you need to do,” and then she makes suggestions. When I fall into the same old habitual thinking, she asks, “How is that working out for you?” and waits for an answer. When I have followed her advice, which usually has to do with approaching conflict without being afraid that I’ll be rejected, an insistence to speak my mind without apology or expectation, and allowing other people to have their own experience without trying to guide it to fit my own neurotic template of how they should act or be, I feel shifts. I feel alive.

At 6, I didn’t want to be convinced out of what is true: that the world is a dangerous, unfair place, and that people die. Although I completely understand why a therapist would not necessarily affirm this interpretation of a child’s vision of the world, I can see Juliana sitting across from my 6-year-old self and saying, “Yes. It is. And you’ve got two choices. You can trust, or you can crawl in a hole and give up.” Of course I cannot imagine how I would have reacted then, but I already knew some hard truths; I believe I would have appreciated some equally tough answers.

It is thanks to Juliana that I have avoided giving up and am learning daily how to trust not as much in the world, which did take my son, but in my ability to bear it and find (or make) beauty in it when there seems to be none. It doesn’t sound like anything. It simply is.