No, a massive "island of debris" isn't heading toward the U.S.

Some debris, yes. But not a "mass the size of Texas." 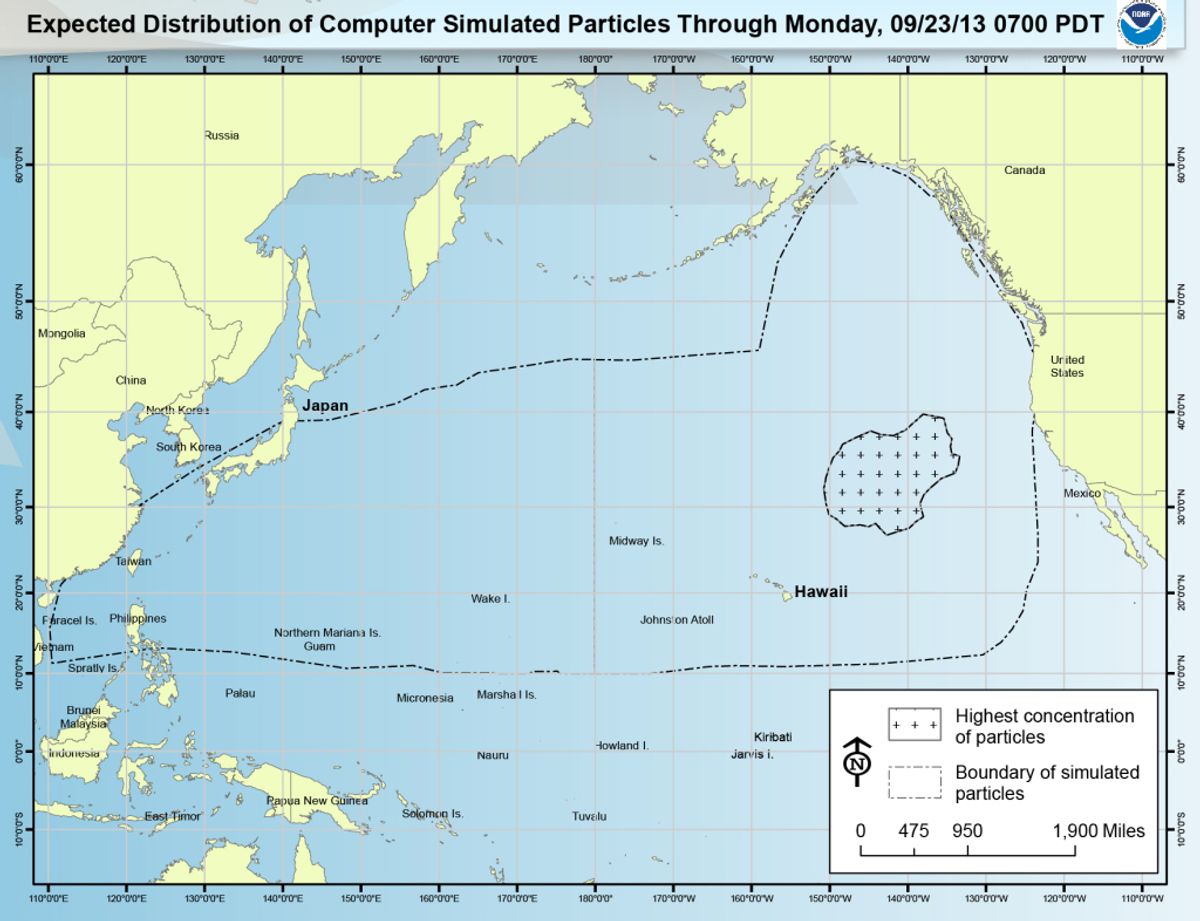 An important alert from the National Oceanic and Atmospheric Administration:

It's easy enough to see how the above map, released by the NOAA, may have confused people. Japan's 2011 earthquake and tsunami swept an estimated 5 million tons of debris into the Pacific Ocean. It sure looks like a massive heap of that trash is on course to hit California. And that's how a number of news outlets -- including Discover Magazine, Mail Online and RT -- are reporting it. As Quartz put it:

Where did that 5 million tons (4.5 tonnes) of debris go? Some of it formed a pile of debris the size of Texas. Just as that state once annexed itself to the US, this floating Texas-sized trash heap is about to join borders with the American West Coast. Nearly 32 months after the tsunami hit, it’s now around 1,700 miles off the Pacific coast, according to the National Oceanic and Atmospheric Administration (NOAA).

But according to the NOAA's Marine Debris program, we're not about to get a 51st state. As they explain on their website, 70 percent of that original 5 million tons of debris sank off shore. While it's impossible to estimate how much of the remaining 1.5 million tons is still floating, an NOAA spokesperson told Salon that "there is no mass 'flotilla' of debris headed toward U.S. coasts." The part that looks like a Texas-sized island merely represents where there's a higher concentration of it. And the map only shows data for one date in September -- because wind, waves and ocean currents make it next to impossible to forecast where, precisely, the detritus might end up.

Only a few of the 1,500 reported debris sightings have been definitively traced back to the tsunami (the red triangles on this map), and none of it has shown signs of radioactive contamination from Fukushima: So that's the good news. The bad news is that the debris has scattered across the North Pacific, with a total area of roughly three times the size of the continental U.S.  Some of it -- including boats, a 185-ton dock and and a Harley -- has already reached Hawaii and the west coasts of the U.S. and Canada, and the NOAA expects more will arrive over the next several years.

The NOAA also confirmed that the trash appears to be providing a free trip to invasive species, which is a concern. Marine biologists at Oregon State University told Fox News that 165 species native to Japan have already been found on debris that made it to the West Coast.

Marine debris in general, not just Japan's runoff, poses a threat to our oceans, an NOAA spokesperson said. A major reason why this specific flotsam is getting so much attention is because the tsunami gives them a precise date and location for its release into the ocean -- and so can help them better understand the way marine debris travels. Not to mention, they also just want to help victims of the tsunami get back some of their belongings, like those boats, after their ocean journey.