The wonderful and absurd story of "Minecraft" 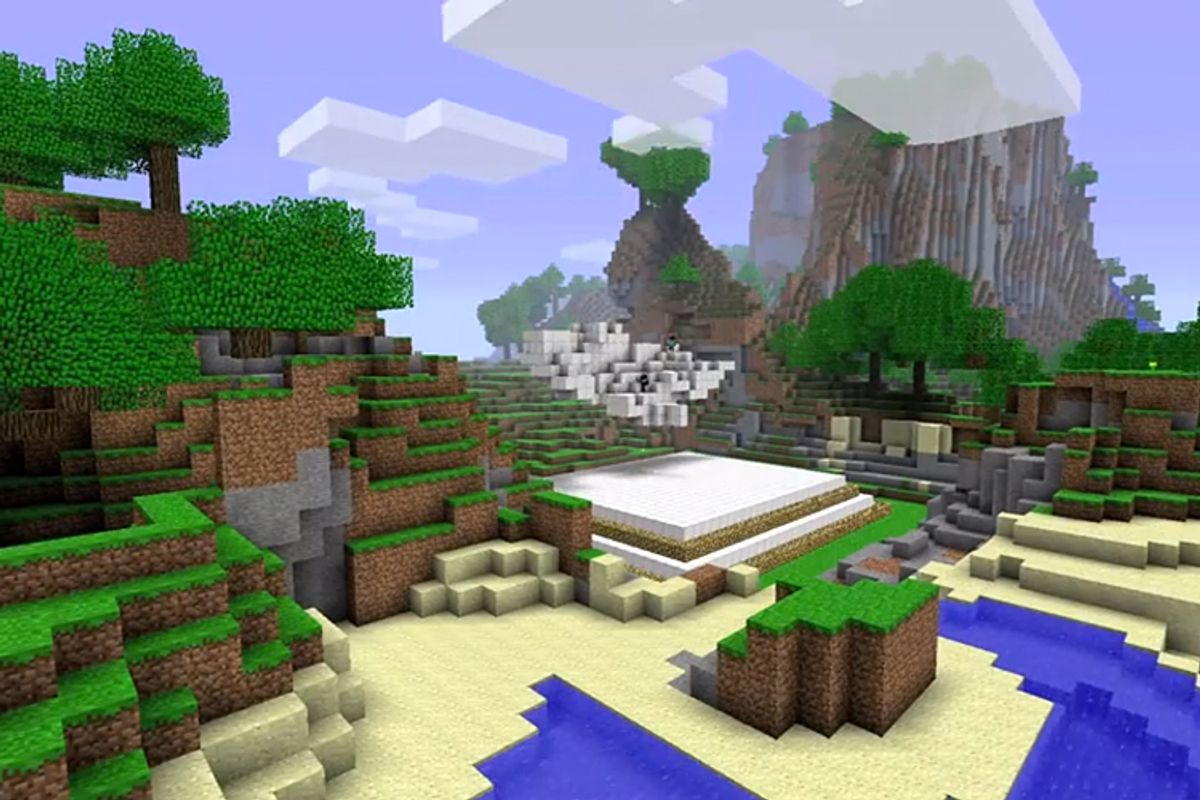 If you've watched any television in the last couple of weeks targeted at the male 18-49 demographic, you have been exposed to multiple commercials pushing the new or upcoming blockbuster video game releases "Battlefield 4," "Call of Duty: Ghosts" and "Assassin's Creed IV: Black Flag." Holiday season is here, and that means big budget marketing campaigns for big-budget games. A lot of shit is getting blown up.

These games will sell millions of copies, most likely justifying the immense investment of developer man-hours and financial resources and state-of-the-art graphics technology poured into them. In entertainment culture, it doesn't get bigger business than this.

But if recent past history is any judge, many of the purchasers of those games will buy them, play them obsessively for a few weeks, and then, once bored, return to devoting their hours to another game, a game called "Minecraft." A game that they purchased for a pittance several years ago, and that is supported by only the most minimal marketing budget. A game that, by any civilized standard, boasts horrible graphics. A game that is basically impossible to "win." OK, you can blow things up in "Minecraft," but it's not necessarily the point. You certainly don't have to.

The tale of how a Swedish computer geek created a low-budget graphically primitive game that took the world by storm, earning himself millions of dollars and a devoted cult fandom, is a great story. It is told well in "Minecraft: The Unlikely Tale of Markus, 'Notch' Persson and the Game that Changed Everything." Written by two Swedish journalists, Daniel Goldberg and Linus Larsson, "Minecraft," the book, does a very good job of placing "Minecraft," the game, in the context of Internet culture and the evolution of the gaming industry.

"Minecraft" is important because it proves that independent games can hit it big; that a single programmer (or handful of programmers) can come up with an idea, distribute it over the Internet, and strike it rich. It's a dream come true: Indie game developers can follow their own vision as creative auteurs without having to sell out to the man. Persson didn't need a big marketing budget when he had the world's greatest word-of-mouth communications medium ever invented to spread the "Minecraft" gospel.

"Minecraft" is important because it demonstrates the power of community. "Minecraft" fans trust Markus Persson to do what's right by the game, not what's right by a focus group or a quarterly earnings report. Goldberg and Larsson do a great job of showing how Persson cultivated the support of "Minecraft" players, remaining attentive to their suggestions and desires, while never trying to crack down on the culture of "modding" that grew up around "Minecraft" -- the community of independent coders who created their own extensions to "Minecraft," adding capabilities and functions that beggar description.

But perhaps most important, "Minecraft" is a celebration of the power of imagination and creativity. You don’t need photorealistic graphics if you give players enough room to have fun. "Minecraft" is a world-building game in which anything is possible.

The most popular analogy compares "Minecraft" with Lego. You build stuff out of blocks. This analogy is not wrong. Marcus Persson was a big Lego fan. At the same time the 7-year-old was learning how to program a Commodore 128 computer, he was obsessing over his Lego bricks. The fact that the influence has now completed a full circle -- you can buy Lego "Minecraft" sets! -- must be extraordinarily gratifying.

How replicable is the story of "Minecraft"? That's hard to say. Persson himself seems pretty clear that he is unlikely to ever create another game that goes instantly viral and generates a fountain of cash from tight-fisted gamers across the world. For every "Minecraft," there will undoubtedly be thousands of indie games that never break big.

But at the core of the story of "Minecraft" is the lesson that success is possible, if you have a good idea and the passion and skill to pursue it. You don’t need the backing of a major gaming studio. You don't need the best graphics or the most button-pushing violence. You don't need multimillion-dollar ad campaigns and teams of programming drones. Just code it, and they will come.

"Minecraft" is indeed an unlikely tale. That's what makes it so great, and that's why this little book will make a terrific holiday gift for the gamer in your life. Instead of the next iteration of "Call of Duty," get him or her the story of Markus "Notch" Persson. Who knows what might happen next?