Can China make us better recyclers?

Once the leading buyer of US scrap, China has raised its standards -- forcing us to reevaluate our waste disposal 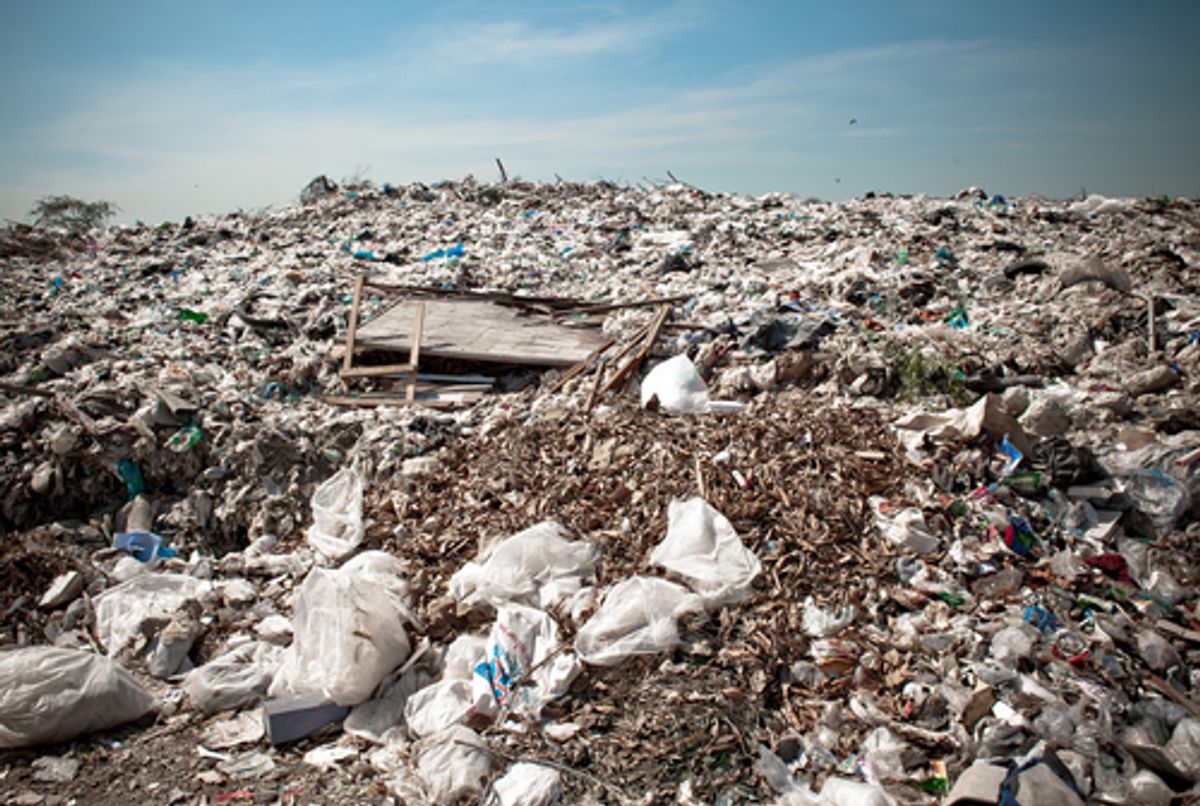 As you dutifully deliver your recyclable soda bottles and soup cans to the curb each week, you’re probably not thinking they’ll soon be embarking on an intercontinental voyage. But there’s a good chance that they are. The United States ships 50 to 75 percent of the material collected from curbside recycling programs to China each year, along with such scrapyard staples as junked cars, wire cables, broken motors, and other industrial and commercial castoffs. Add it all up, and that’s 46 million metric tons—enough to fill 4.6 million garbage trucks—of scrap metal, paper, rubber, and plastic, valued at roughly $11 billion.

Without China as a market for our recycling and scrap, U.S. landfills would fill up a lot more quickly, and this country’s recycling industry would lose a key source of revenue as hauling companies instead routed our bottles, cans, and newspapers to dumps and incinerators. The U.S. actually got a taste of what that would be like earlier this year, when China began rejecting scrap material at its ports.

What’s wrong with our waste? America and other nations have been exporting scrap to China for more than a decade. After laborers sort and clean the material, processors sell it to manufacturers (most of which are located overseas) who use it to make new appliances, packaging, computer clamshells, stop signs, engine parts, and other durable goods. But in recent years, the amount of unrecyclable material—stuff like food, concrete blocks, poop, and medical debris—cocktailed in with legitimate scrap has been creeping ever upward.

For years, importers were lenient, tolerating as much as 40 percent contamination per bale.  But last February, the Chinese government—under increasing public pressure to clean up its air and water pollution—cracked down. All of that extraneous or poorly sorted material was proving costly to Chinese buyers. Anything they couldn’t use, they would burn or bury, fouling China’s environment.

Under the new directive, called Operation Green Fence, Chinese port inspectors allow no more than 1.5 percent contamination per bale of scrap. By September, China had suspended nearly 250 companies’ import licenses and rejected thousands of scrap containers. Some of them were delivered to more permissive ports in Vietnam and Malaysia, which also covet raw materials for manufacturing. Other ships headed for Hong Kong, where workers cleaned the loads of contaminants, re-baled them, and sent them back to China. Still other containers never left the U.S.: vast tonnages of plastics and paper went straight from materials recycling facilities (known as MRFs, pronounced “murf”)—which sort and bale metals, plastics, and paper collected through curbside recycling programs—to landfills and incinerators in this country.

But what sounds like a disaster for community recycling programs, and for landfills running out of space, may ultimately prove to have many benefits.

China first started importing scrap in large quantities after 2001, when it joined the World Trade Organization. Almost immediately, importers began to pay more for scrap than some U.S. industries were offering. It was also cheaper, much of the time, for American sellers to ship their material to Asian buyers than to send it overland to U.S. manufacturing or processing plants, thanks to discounted rates on ships that would otherwise be sailing for China empty. In 2012, for example, shipping a container from Los Angeles to China cost around $600, while sending the same container to Chicago via rail cost four times as much.

There are other reasons that U.S. scrap migrated overseas: Chinese labor is far cheaper than American, and Chinese handwork—unwinding copper wires from motors, for example, or extracting steel screws from aluminum chair frames—wrings more value from scrap material than our automated systems can. And then there’s supply and demand, the single most important driver of recycling. The United States, which manufactures comparatively little, generates far more recyclable material than it can incorporate into new products.

“Exports have been a relief valve for scores of years,” says Scott Horne, vice president of government affairs for the Washington, D.C.-based Institute for Scrap Recycling Industries, a lobbying group. Without China, our junked cars and old motors would pile up, and our water bottles and soup cans would be landfilled.

Now, with Operation Green Fence reducing the demand for U.S. scrap and recycling, prices for those materials have dropped. Before the Green Fence went up, reports Adam Clark, of the Northeast Resource Recovery Association, a bale of mixed plastics in his region could fetch upwards of eight cents per pound; after, it brought 2 cents, or less, per pound. Paper, pre-fence, netted $80 to $90 per ton; post-fence, it dropped to between $40 and $50. That’s not so great for MRFs, but it’s good for domestic mills and processors eager to manufacture new goods from old. (Until now, with all of the scrap going to China, processors haven’t been operating at full capacity because they couldn’t get enough material.) Now it’s a buyer’s market.

Even better, tighter Chinese inspections and the threat of severely limited markets have forced some U.S. MRFs to clean up their acts, hiring extra labor, slowing down their sorting belts, or buying optical sorters, which use lights, lenses, and cameras to differentiate among different types of plastic, and then air guns to blast them into separate chutes. The result is cleaner bales of material that can make it through the Green Fence. Domestic processing facilities, which buy material from MRFs, also have more, and better, material to choose from, says Jerry Powell, publisher of Resource Recycling magazine.

To be sure, China still wants the world’s scrap. Clean scrap is the feedstock for many of those shiny new goods that China manufactures and exports to the rest of the world. It’s also the feedstock for China’s own rapid industrialization: you can’t build cities and the systems that run them without an abundance of metals and plastics.

Operation Green Fence has temporarily altered the scrap landscape in China, but it’s been a game changer for the U.S. recycling industry, which relies on exports for profit and had grown sloppy over the years. If its central lesson holds—“Don’t send us garbage”—everyone will be better off.

Yes, improving bales of recyclable material will cost more time and money, but there’s a great deal riding on the integrity of the process. Not only will the Chinese villages that break open and sort these bales be cleaner, but more metals will remain unmined; more oil will stay in the ground; and more Americans will believe that the system that keeps these materials cycling actually does some good.