The celebrated intellectual unloads on the U.S. government for shirking the international community 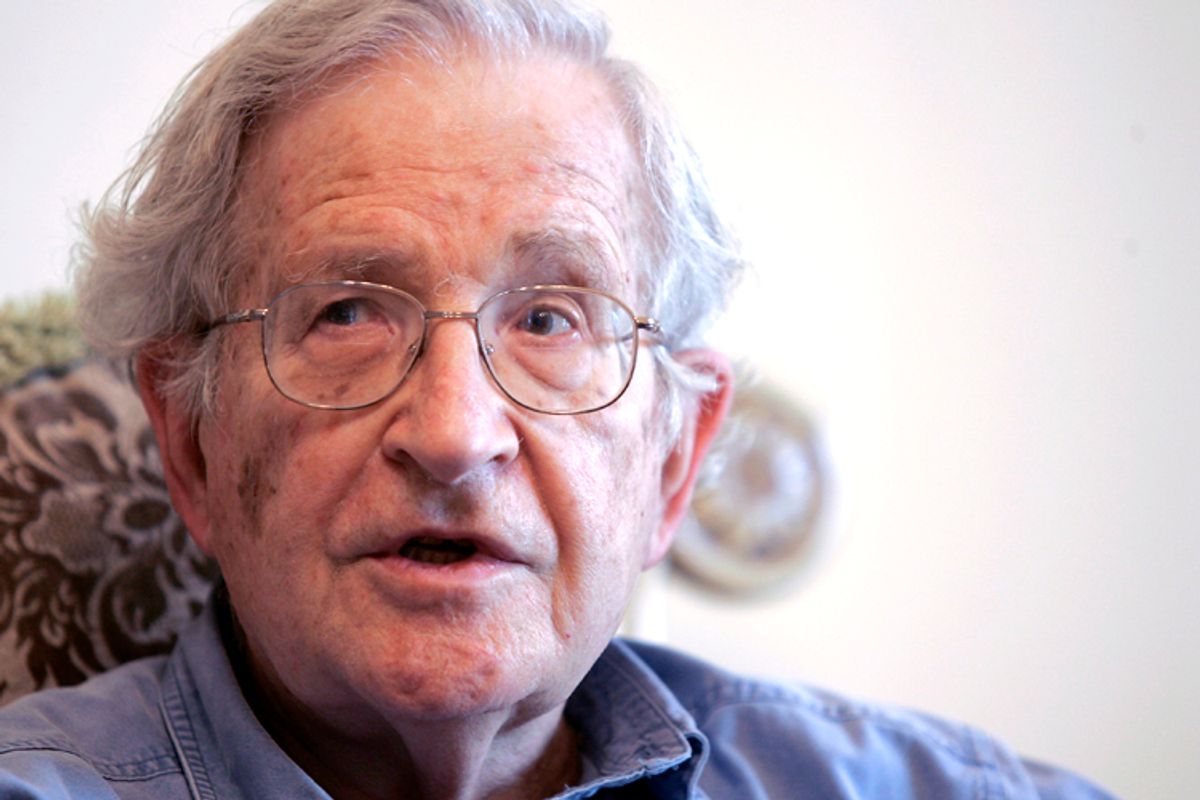 In a new article at AlterNet, Noam Chomsky describes the United States as a "rogue state" operating under the leadership of a "one-party" system. He recommends that the global community "de-Americanize" itself by separating from a "reigning military power [that] is losing credibility in other domains."

Chomsky describes the U.S. as an ill-functioning and unruly hegemonic power, stewarded in large part by a coalition of business interests that can no longer control the populist forces they've unleashed as a "battering ram in the neoliberal assault against the population." The GOP establishment has had some success, Chomsky grants, "but now finds that it can no longer control its base, much to its dismay." He cites the virulent response to Obamacare, and the recent government shutdown, as cases-in-point.

Chomsky saves his greatest indignation, however, for the U.S.'s recent capture and interrogation of the terrorist suspect Abu Anas al-Libi, seized by U.S. forces in the Libyan capital of Tripoli. "U.S. Secretary of State John Kerry informed the press that the actions are legal because they comply with American law, eliciting no particular comment," Chomsky writes. "Principles are valid only if they are universal," he continues. "Reactions would be a bit different, needless to say, if Cuban special forces kidnapped the prominent terrorist Luis Posada Carriles in Miami, bringing him to Cuba for interrogation and trial in accordance with Cuban law.

More from Chomsky at AlterNet:

Such actions are restricted to rogue states. More accurately, to the one rogue state that is powerful enough to act with impunity: in recent years, to carry out aggression at will, to terrorize large regions of the world with drone attacks, and much else.

And to defy the world in other ways, for example by persisting in its embargo against Cuba despite the long-term opposition of the entire world, apart from Israel, which voted with its protector when the United Nations again condemned the embargo (188-2) in October.

Whatever the world may think, U.S. actions are legitimate because we say so. The principle was enunciated by the eminent statesman Dean Acheson in 1962, when he instructed the American Society of International Law that no legal issue arises when the United States responds to a challenge to its "power, position, and prestige."

Cuba committed that crime when it beat back a U.S. invasion and then had the audacity to survive an assault designed to bring "the terrors of the earth" to Cuba, in the words of Kennedy adviser and historian Arthur Schlesinger.