Can a hipster trend also be practical? 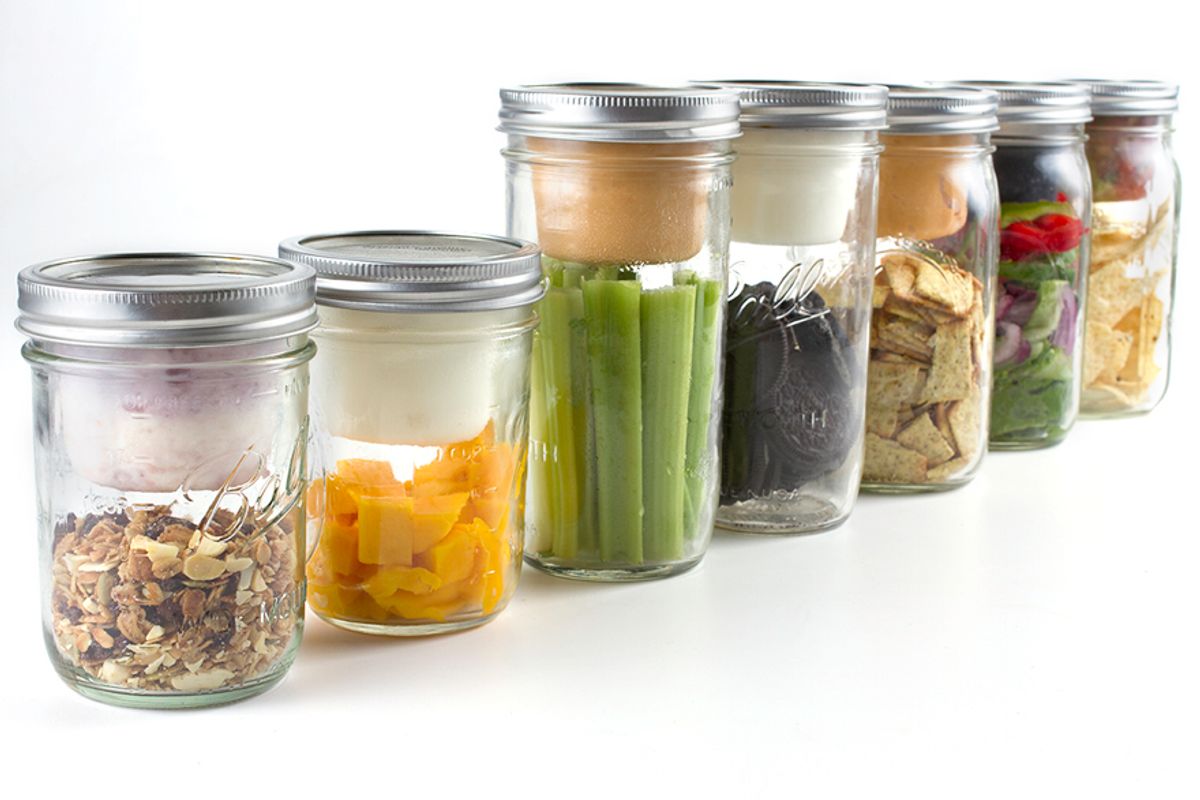 Here’s a mildly embarrassing confession: Every morning this week, I’ve sipped my morning coffee from a Mason jar. In my bag I’ve packed two more -- a small one, with yogurt and granola, and a 1-liter jar with a salad layered neatly inside. My meals have been pretty enough to post pictures of to Pinterest, with the entire effect coming off as a bit more ... precious than I might prefer my lunch to be. Or, as my editor put it, “That’s very Brooklyn of you.”

The Mason jar, designed for home canning, has been around since the mid-1800s, but it’s currently in the midst of a cultural revival. I first saw them used for something other than storing jam at my small liberal arts college, where a certain type of student (the Brooklyn type) sipped herbal tea from them during class.

They’ve since popped up in restaurants as creative barware. A cursory Google search show that San Francisco has been leading the way on that front (like most trends, people are divided on whether they love it or hate it). They’re just about everywhere in New York, too -- the last time I was at Smorgasburg, the Brooklyn foodie market, the line for juice served in 1-liter jars was three times as long as those queued up for vegan bahn mi or pour-over coffee. In the American South, there’s some murmuring that they’ve already jumped the shark.

Aaron Panone and Joshua Resnikoff, who designed the Cuppow lid and BNTO lunchbox adapter, came by Mason jars more organically: Resnikoff’s wife had a homemade kimchi business, and as a result, they had plenty of extra canning jars lying around. According to the legend now inscribed by the New York Times, Resnikoff was attempting to drink from one while driving. He hit a bump, his coffee spilled, his wife said, “I wish there was something that would make it easier to drink out of the jars,” and Cuppow was born. BNTO came about in response to a similar desire: Making it easier to use the jars as lunchboxes. Both products succeeded in solving those very specific problems.

The products themselves are simple: a reusable lid that makes it easier to drink from a jar, and a 6-ounce container that attached beneath the jar’s lid, allowing the user to “separate the wet stuff from the dry stuff.” In my case, they keep the dressing away from the lettuce, and the yogurt away from the granola, until it’s time to mix.

But what they accomplish goes beyond their form: They’ve taken something trendy and made it more functional. Acknowledging that yes, they already are functional for canners, and yes, people were already packing their lunch in them before Cuppow came along, they convinced me that Mason jars have something to offer – even for someone who hasn’t yet moved to Brooklyn.

OK, I do still feel a little self-conscious about drinking out of a Mason jar, and I didn’t find a clear advantage to it over my usual reusable coffee mug. But the BNTO-equipped jar is a major improvement over the way I usually pack my lunch: a leaky plastic container wrapped in a plastic shopping bag, with extra accouterments stored in sandwich baggies, and individual servings of yogurt. Not to mention the fact that the container, after months spent in the dishwasher and the microwave, has probably been leaching chemicals into my food.

While the Cuppow products are plastic, they’re BPA and phthalate-free, dishwasher-safe and made from 100 percent recycled materials.  Panone and Resnikoff went through a lot of trouble to make their supply chain small-scale and local to their base in Massachusetts. Plus, 5 percent of their proceeds from the colored lids go to domestic charities selected for their focus on “engaging people on environmental stewardship, recycling, and social awareness.” In other words, they take a green product – the Mason jar – and make it even greener.

I feel greener, and I also feel more like a hipster, but the green feelings are winning out.

-The effect of the plastic pink lid (proceeds go to Living Beyond Breast Cancer) was less hipster and more “sippy cup.”  Greg Ralich, who runs social media for Cuppow, said this is something they’ve definitely noticed. He sees the “instant throwback” to the type of mug favored by 2-year-olds as a selling point: It calls back to the idea of them being easy and comfortable to drink out of.

-Cuppow aims to convert people from all lifestyles. “It’s just as good for tailgating Nascar” as it is for drinking your morning coffee at the canning factory, said Ralich. They do sell to canners, but a large percentage of their customers probably got their jars from Target or Whole Foods (as I did).

-Their customers do skew female – Pinterest probably has something to do with this.

-You can buy jars with handles that were specifically designed for drinking. But they don’t count as “real” Mason jars. To stay authentic, stick to Ball and Kerr, which are guaranteed to be food-safe.

There are other lunch containers out there with separate compartments for liquids, but the BNTO plus Mason jar combo is likely one of the least expensive – and most substantial – options.

Both the lids and the BNTO retail for $7.99, and are designed to last as long as Mason jars themselves (which only cost a couple of dollars).

Despite their reputation, Mason jars are pragmatic. Fitting them with adapters only makes them more so.