In New York, Republicans and the police commissioner kept invoking the bad old days, but this time it didn't work 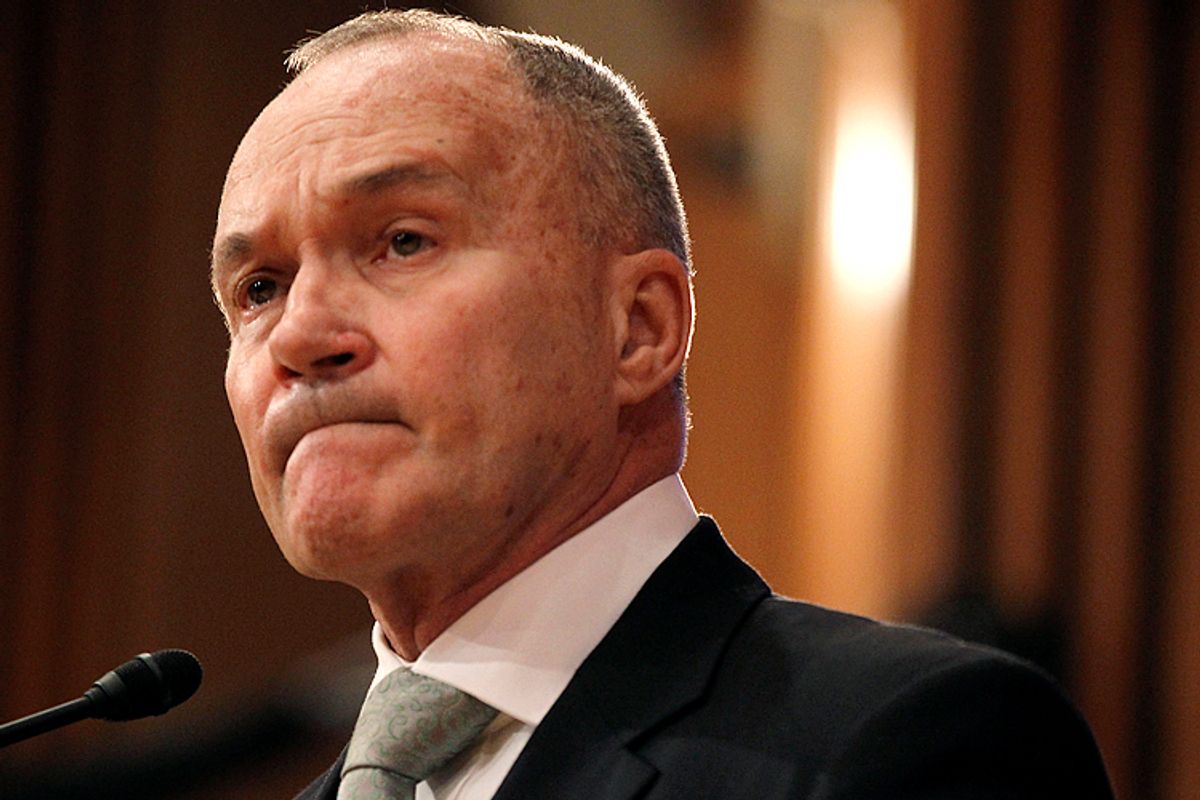 Bill de Blasio is officially the next mayor of New York City. He won yesterday's election decidedly and rather easily. Just a few months ago, he was considered a long shot, in large part because one of his main campaign promises was that he'd fire New York's broadly popular and nationally respected police commissioner. That promise turned out to be crucial to his success. Here's hoping that this victory means the end of "scaring white people" as a viable and common New York City political tactic.

Republican mayoral nominee Joe Lhota's general election campaign theme was, basically, that a vote for de Blasio is a vote for race riots. The theme, established in Lhota's ads and echoed by his media allies in the New York Post, was that de Blasio will return New York to "the bad old days" of high crime. De Blasio will do this, apparently, by firing commissioner Ray Kelly and limiting stop-and-frisk, an NYPD policy that is little more than institutionalized minority-harassment. Once we stop stopping them, according to Lhota, they'll return to causing trouble.

Lhota is, basically, a harmless, mild-mannered New York Republican from the corporate wing of the party, not a dedicated "law-and-order" nut like race-baiting crypto-fascist Rudy Giuliani. So his decision to allow his campaign to be fought on this issue above everything else is a curious one. Obviously one of his problems was that New York Republican political operatives, consultants and strategists are pretty stupid and bad at winning elections. But not entirely stupid: The white vote is still nearly large enough on its own to win elections in New York, and scaring them has, traditionally, worked.

The key to all of Bloomberg's victories was the white vote. His base, broadly, was Republicans, outer borough "white ethnics" and rich liberal whites. Bloomberg's victories depended on Democratic votes, obviously, because this is a Democratic city, and as CUNY's Center for Community and Ethnic Media shows in this analysis of New York elections, Bloomberg did particularly well, in 2009, in "white ethnic neighborhoods in the outer boroughs as well as more liberal white areas." That wasn't a fluke: "This 2009 general election pattern is not new — it has presented itself to some degree in each of the last three mayoral elections and even stretches back to the Koch elections of the 1980s."

Rudy Giuliani, naturally, was the master of scaring white people. Bloomberg never quite campaigned like a Giuliani -- or even a Koch -- but he was still the beneficiary of Giuliani tactics. Bloomberg won in 2001 not just because of Rudy's endorsement (and 9/11), but also because Latino and black New Yorkers were disillusioned with Democrat Mark Green, who'd Sharpton-baited primary opponent Freddy Ferrer. In 2005, other Bloomberg allies made the case: If you vote for the other guy, it will be a return to the Dinkins era. In 2009, Rudy Giuliani returned, with Bloomberg by his side, to make the same argument.

For some reason, David Dinkins, New York's only black mayor and the man under whom the crime decline began, is always used as shorthand for "the bad old days." No one ever says "a return to the Koch days" or "the Beame days." During his single term in office, Dinkins was faced with a level of white rage that made the Tea Party look a bit soft. Decades after his defeat, his name lives on in attack ads and campaign speeches, all arguing that New Yorkers can't make the mistake of allowing them to be in charge again.

That was Lhota's message this year, and no one cared. Not that it was entirely ineffective: de Blasio won a slim 52 percent majority of the white vote. But that's a 23 percentage point improvement over Bill Thompson's 2009 share. (De Blasio even won rich people, defined as those making $100,000 or more. Though in New York City, there are plenty of people making $100,000 or more who think of themselves as residents of the left-behind city in the tale of two cities.) Maybe things would've been different if Bloomberg had convinced Kelly to run for mayor, though I'm not sure that Kelly the candidate would have been more convincing in his defenses of the NYPD than Kelly the commissioner has been. It's easy to imagine that Kelly would've run a very Giuliani-esque campaign, with a heavy dose of terrorism, but New York may finally have revealed the limitations, and the expiration date, of that strategy. (Though Kelly probably wouldn't have mentioned the Dinkins era so often, as that was when he first served as police commissioner. Back then, he was a firm opponent of racial profiling and a strong advocate for community policing. It'd be nice to have that Kelly back as commissioner!)

Following the Democratic primary election, some local white commentators expressed amazement that black voters would enthusiastically support a white candidate over a black candidate, in violation of what was thought to be an ironclad law of New York tribal loyalty. This ignored the fact that black voters generally vote for white candidates much, much more often than the reverse. It's really more heartening that New York's whites have mostly rejected the tribal appeals by Lhota, because those have always been more potent in New York (and American) politics. Now, hopefully, all that's left for Kelly is joining Giuliani on the has-been touring circuit.